THE HUNT is a horror-thriller satire of the best kind. It was delayed a few times and hit theaters just as they shut down. Now, it’s out on VOD. This movie is crazy and the perfect distraction in this Coronavirus world. Read our The Hunt review here!

The Hunt is out on VOD now after having its theatrical release seriously handicapped by the Coronavirus. It premiered (rather perfectly) on Friday the 13th [of March 2020] and now it’s out on various streaming platforms as a digital release.

I am so happy I finally got to watch this movie because it really is the perfect distraction here in the age of the Coronavirus. It’s crazy and over-the-top in so many ways. Also, at the same time, it’s strangely familiar and realistic in a whole lot of ways as well.

Continue reading our The Hunt review below.

A cast having a blast

Even though the plot of this horror-comedy satire thriller is more than enough to make us watch it, the casting certainly doesn’t hurt. Honestly, the casting of The Hunt is amazing in so many ways. The actors all seem to be having a blast in this movie that does seem like a spoof in some ways. And that’s a compliment!

I especially adore Betty Gilpin in The Hunt. She has the most amazing character and kicks a lot of butts. We’re talking Sarah Connor levels of being a badass! You might know Betty Gilpin from her starring role in the Netflix series GLOW or the new The Grudge (2020) movie.

Also in The Hunt, you get two-time Academy Award winner Hilary Swank (Boys Don’t Cry and Million Dollar Baby) in a starring role. It’s always a pleasure to watch her and we don’t get nearly enough movies starring her these days. The most recent movie we saw starring her was the Netflix sci-fi movie I Am Mother.

Amy Madigan from the upcoming horror movie Antlers (2020) is also in this. Actually, there are many actors in this in all kinds of roles. Big as well as quite small. And I loved them all! 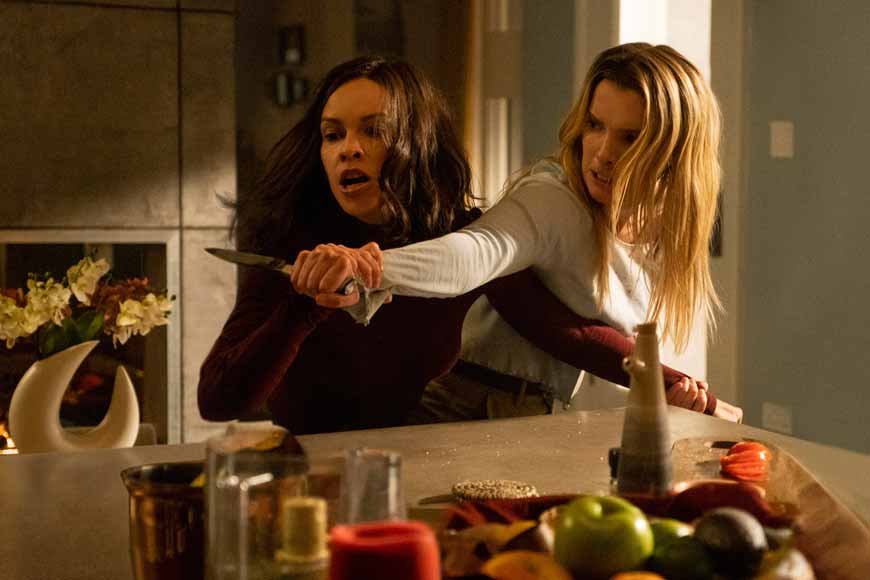 The Hunt is a dark and bloody satire

The trailer might reveal that The Hunt has a crazy plot where human beings are hunted for sport. However, it doesn’t really show you just how much this movie is actually a really dark satire. Both in terms of political satire and social realism. I love it… especially since it’s nice to just forget the craziness of the world for a while.

I expected The Hunt to be some sort of action-horror movie. Actually, it’s much more of a horror-comedy with elements of action and thriller plot-drivers. It’s very bloody and brutal, but always with a tongue-in-cheek approach.

In other words, it’s the polar opposite of the new Netflix sci-fi horror movie The Platform. That one was released on Netflix on the same day as the VOD release of The Hunt. Honestly, I love them both equally but in very different ways and for very different reasons.

Recommended reading: Our review of The Platform which you can (and should) watch on Netflix >

If you don’t like the comedy of The Hunt then this movie won’t be any fun for you. However, you should expect everyone to be ridiculed in this movie. Fans of Trump as well as those who vehemently oppose him. In other words, you need to be able to laugh at yourself as well as others.

Watch The Hunt on VOD now!

Craig Zobel directed The Hunt and he also made the very interesting movie Compliance (2012) which is worth checking out. Most recently, he worked as a director on some amazing TV series. These include Westworld and The Leftovers. His next project is the HBO limited series Mare of Easttown starring Kate Winslet.

The screenplay for The Hunt was written by Nick Cuse and Damon Lindelof. The two recently also worked together on the amazing HBO series Watchmen. If you haven’t watched that yet then do yourself a favor and check it out. You might be confused at first but hang in there and you will be rewarded with one of the most brilliant TV series productions.

I absolutely loved The Hunt and would recommend anyone who loves horror-comedy and satire to check it out. Yes, it’s bloody and violent but it also has some very interesting points. You just have to be openminded and listen to them!

Everyone should be able to recognize themselves in some way in this movie. Either in terms of opinions or causes, you believe in or fight for. However, it’s also turned upside down in most ways. You’ll see what I mean when you watch The Hunt. And you really should!

Twelve strangers wake up in a clearing. They don’t where they are, or how they got there. They don’t know they’ve been chosen for a very specific purpose… The Hunt.

In the shadow of a dark internet conspiracy theory, a group of globalist elites gathers for the very first time at a remote Manor House to hunt humans for sport. But the elites’ master plan is about to be derailed because one of the hunted, Crystal (Betty Gilpin, GLOW), knows The Hunters’ game better than they do. She turns the tables on the killers, picking them off, one by one, as she makes her way toward the mysterious woman (two-time Oscar® winner Hilary Swank) at the center of it all.