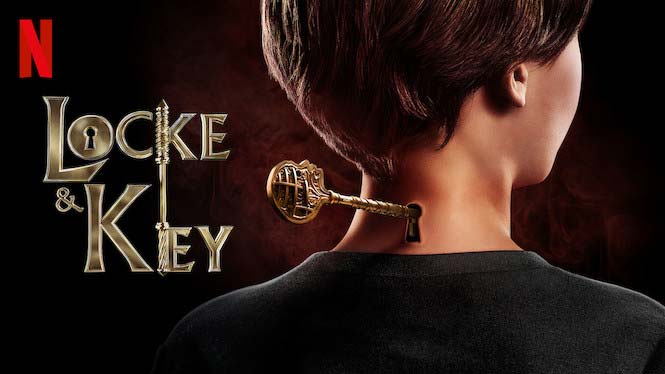 LOCKE & KEY is a new Netflix series in the horror and fantasy genres. It has a fascinating story and some very likable character. Based on graphic novels by horror author Joe Hill and illustrator Gabriel Rodriguez. Read our Locke & Key Season 1 review here!

Locke & Key is a new Netflix horror series that also has a lot of fantasy elements. In some amazing ways. It’s based on the comic book series by horror author Joe Hill and illustrator Gabriel Rodriguez. I have not read these, but from what I gather, fans of the graphic novels might find this adaptation too light.

However, season 1 of this Netflix series does have some very dark moments. The two last episodes are generally very horror-filled, which might have a lot to do with who directed them. More on that in our final segment of this review.

This is the second series adaptation of an IDW comic within weeks. Netflix also released October Faction which is another IDW comic book adaptation. I really enjoyed both but Locke & Key definitely has more horror in various ways!

Continue reading our Locke & Key Season 1 review below. We’ve watched all 10 episodes of this new Netflix series for this review.

Perfect casting of the young characters

The main characters in Locke & Key are actually the kids in the Locke family as they move back to the Key house. This was their dad’s childhood home and since their dad dies violently at the beginning of this story, their mom decides a change of scenery will do them well.

Okay, two of the “kids” are actually teenagers. Oldest brother Tyler and his sister Kinsey, while their younger brother, Bode, is what you would call a kid. Having young actors as the main protagonists in a horror series can be dangerous. However, in Locke & Key, they work eerily well.

In fact, these young characters are both realistic and likable. Sure, there are some teen moments, but for the most part, they are responsible and caring. Especially towards one another which was refreshing. Interestingly, this was also the case with The Haunting of Hill House (which is still the best horror series on Netflix).

The actors portraying these young characters are so well cast. We have Jackson Robert Scott as Bode Locke and if you love horror, you definitely know him. He was Georgie in the new It adaptation and the title role in The Prodigy (2019) which is a very overlooked horror movie.

As the older brother, Tyler Locke, we have Connor Jessup. He was in the Falling Skies and American Crime TV series and is in the new mystery thriller Disappearance at Clifton Hill. The sister, Kinsey Locke, is portrayed by Emilia Jones. She was in the horror movie Ghostland and the mystery sci-fi series Utopia.

Finally, I have to mention Laysla De Oliveira. She was just in the Netflix movie In the Tall Grass and plays the most fascinating character in Locke & Key. 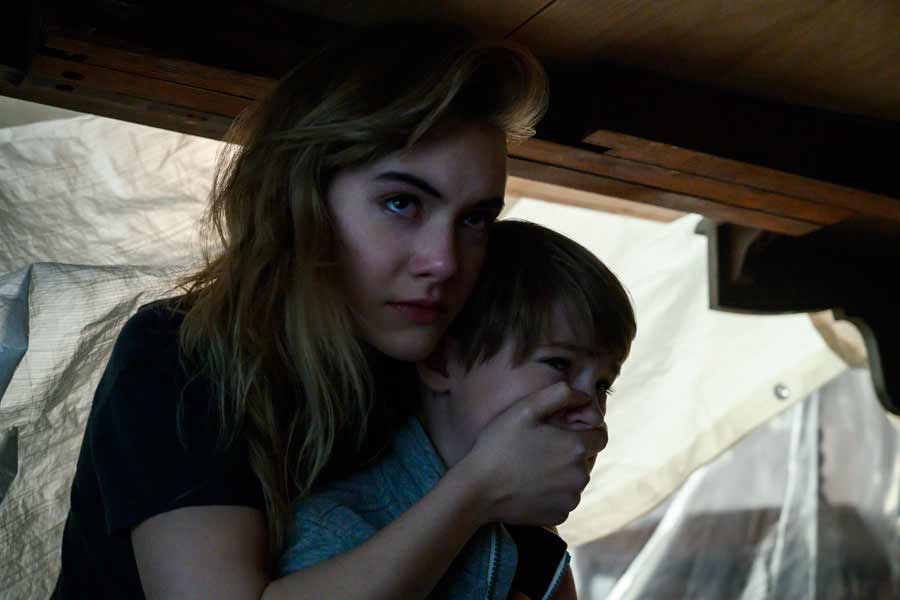 As mentioned from the very beginning of the review, this new Netflix series is based on a comic book series. Joe Hill is the author of Locke & Key and (just like his father always has), he does have a cameo towards the end of the final episode.

His father is, of course, Stephen King. If you know what Stephen King looks like, then you won’t miss Joe Hill’s cameo. He looks a lot like a young version of his dad.

This is far from the first adaptation of a Joe Hill story. Very recently, Netflix released the movie In the Tall Grass which is based on a short story by Joe Hill and Stephen King.

Also, Daniel Radcliffe starred in director Alexandre Aja’s adaptation of the Joe Hill novel Horns. I prefer the book but did enjoy the movie. There has even been a series based on a Joe Hill novel with AMC’s NOS4A2 but I did not care for that one. With Locke & Key, I was completely on board from the very beginning.

Will there be a Season 2 of Locke & Key?

Well, that is the big question right now and we really do want a season 2 of Locke & Key after devouring season 1. Hopefully, you will too. Fortunately, there is already word that the creators are working on Season 2 of Locke & Key. It hasn’t been greenlit yet, but hopefully, Season 1 will be such a hit that it’s only a matter of time.

To me, Locke & Key is actually one of the best Netflix horror series since The Haunting of Hill House.

Okay, I did also love Marianne which was more hardcore horror – and sadly will not be getting a season 2, which was a shock to many. Including us, since everyone seemed to love it. Both critics and viewers, but such is the world of Netflix. You just never know. 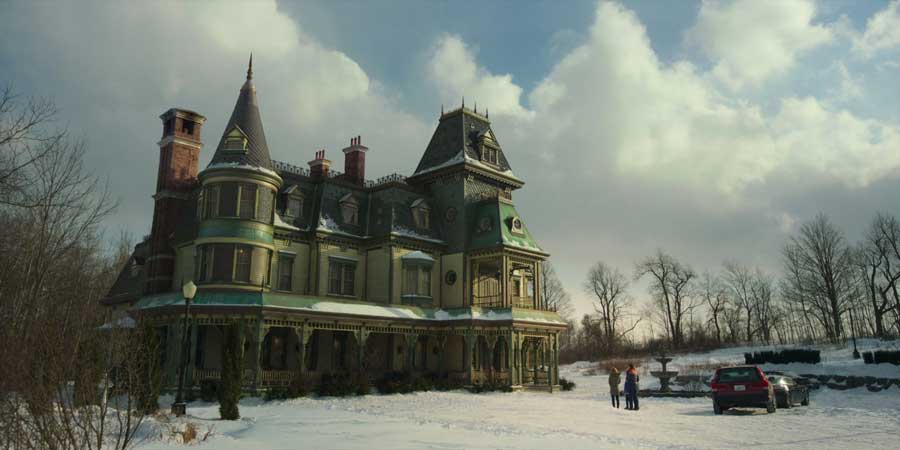 The final two episodes get pretty dark. In fact, episode 9 of Locke & Key is where everything begins to come together and is explained. Episode 9 and 10 (the two final episodes) are directed by the horror sci-fi master, Vincenzo Natali.

He directed the iconic sci-fi horror movies Cube (1997) and Splice (2009). Also, Vincenzo Natali has directed TV series episodes of Hannibal, The Strain, and Westworld. Basically, everything that is or was ever good. More recently, he was also the director of the Netflix horror movie In the Tall Grass.

Yes, In the Tall Grass has a lot of correlations with Locke & Key but this series succeeds everywhere that movie failed. Both in terms of pace, characters and (most importantly) storyline. To me, Locke & Key is a series that delivers both in terms of adventure, horror, and characters. I was very entertained the entire season!

After their dad’s murder, three siblings move with their mom to his ancestral estate, where they discover magical keys that unlock powers — and secrets. 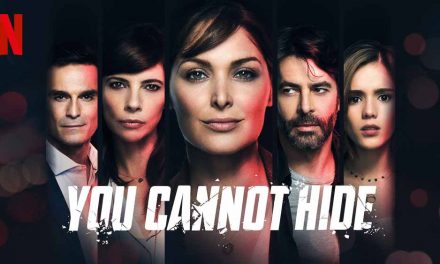 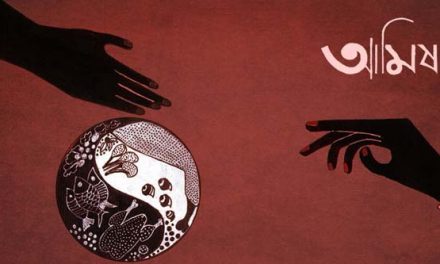 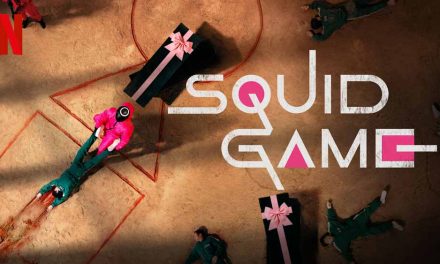 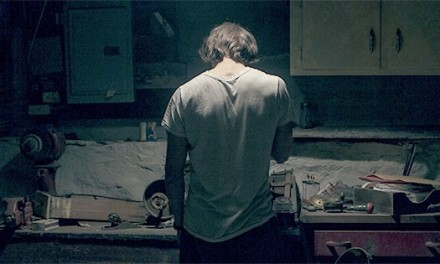