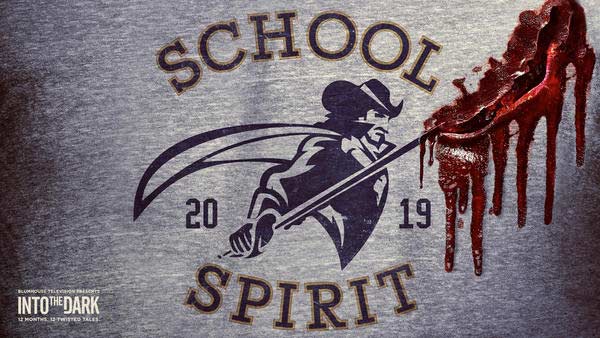 SCHOOL SPIRIT is like a slasher knockoff of The Breakfast Club. Also, it’s a movie in the Hulu original horror anthology series Into the Dark. Has this anthology run its course and is officially out of ideas? If this is all we can expect, then maybe so. Read our full School Spirit review here.

School Spirit is the latest installment of Into the Dark – the Hulu horror anthology series that releases a new movie each month.

I first came across Into the Dark in March. Up to that point, I was enjoying it. The Body did not disappoint. Flesh & Blood excitingly pitted an agoraphobic daughter against her creepy father (naturally played by Dermot Mulroney). Pooka!, Down, and I’m Just F*cking With You were also well made. I had high hopes for Into the Dark.

And then May happened.

Its installment, All That We Destroy, was… good. Its provocativeness, casting, and acting warranted 3 out of 5 stars, but it started to encroach on stories told by other, older, and, well, better films. Shouldn’t a horror film be at least creepier than the amount that other horror stories’ motifs and themes creep into it?

But I digress. This review is about School Spirit (the August installment of Into the Dark).

And it’s as if Into the Dark has run out of ideas.

A slasher knockoff of The Breakfast Club

Hulu describes School Spirit as “A group of social outcasts stuck in weekend detention is confronted by the school’s legendary hauntings.”

School Spirit tells the story of 5 Helbrook High School students in Saturday detention, supervised by their verbally abusive vice principal. Supposedly, Helbrook is haunted by… a school spirit (no pun intended), a ghost that “takes” the bad kids.

However, the students’ skepticism of a school haunting subsides upon witnessing bloodied hallways, hidden passages, louder-than-normal creaks in the pipes, and the spirit itself. 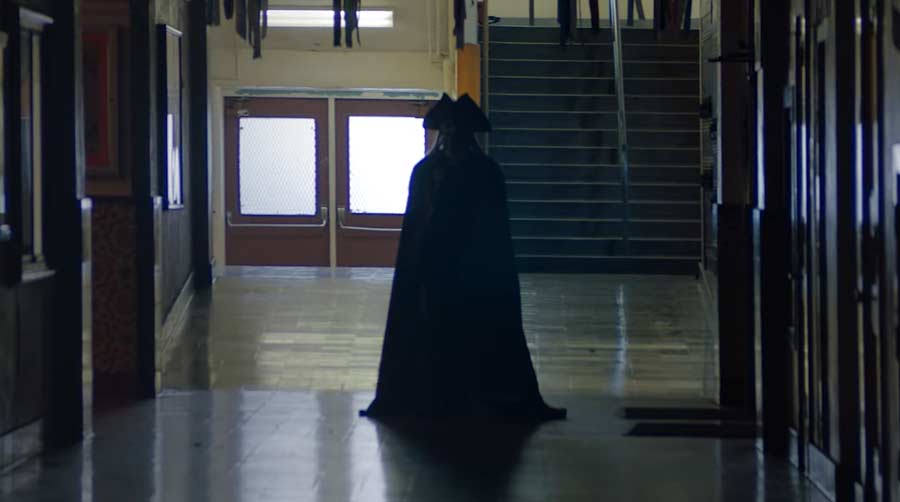 Now, The Breakfast Club was a phenomenal film. But high school is (slightly) different than it was in 1985, so presumably, in School Spirit there was a lot of room to maneuver with respect to portrayals of students, detentions, and teachers.

Unfortunately, such maneuvering did not happen.

School Spirit is not even the first attempt at a horror version of The Breakfast Club. Bad Kids Go To Hell was a horror/dark comedy version (ultimately thriving by casting Judd Nelson from The Breakfast Club as the school’s headmaster).

Deadly Detention is another example and that one was more of a spoof. Unfortunately, School Spirit took itself too seriously and tried to be a true slasher film, albeit a run-of-the-mill one that did little to impress.

Despite these cons, School Spirit did have its perks.

Second, the actors looked of reasonable high school age. And, third, K-Ci & JoJo’s “All My Life” is featured toward the end of the film.

Despite these positive elements, School Spirit gets 2 out of 5 stars. About halfway into the film, I thought “this is a 3-star movie”. Alas, I came to regret such optimism. I do hope that the quality of School Spirit is the floor for Into the Dark.

According to Wikipedia, September’s Into the Dark installment is called Pure, in which “several teen girls at a Purity Retreat participate in a secret ritual, and they start to see a supernatural entity. The girls need to focus on the demon that they have unleased, as well as their father’s expectations.”

Welp. I won’t hold my breath.

A group of social outcasts who are stuck in weekend detention are confronted by the school’s legendary hauntings.