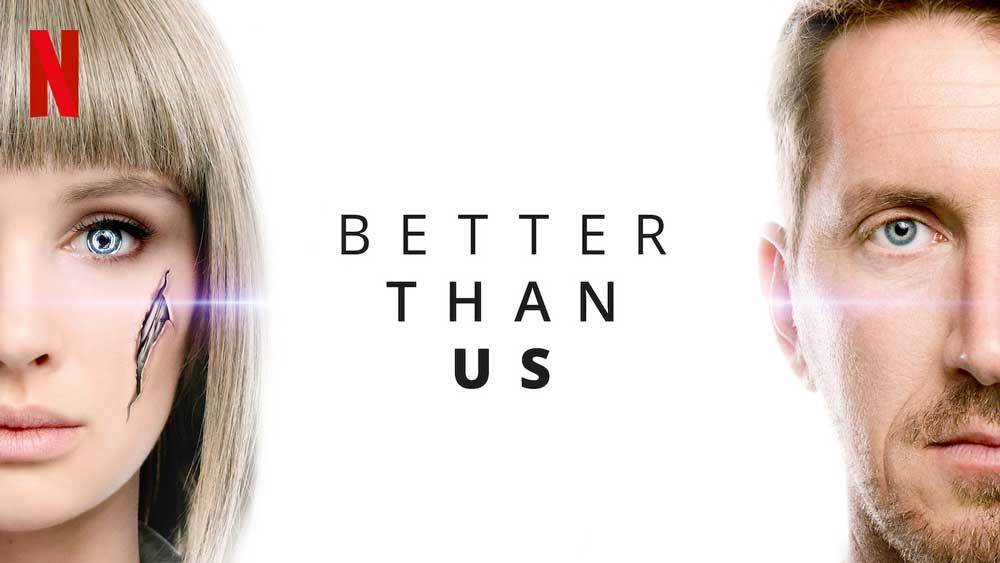 BETTER THAN US is a new sci-fi series on Netflix. The plot revolves around robots and their place in a world run by humans. Could the robots be better than us? The sci-fi drama is a Russian production but this Netflix series is very universal. Read our Better Than Us review here!

Better Than Us is a new series on Netflix. This is a series in the sci-fi drama hybrid genre. However, if you like sci-fi then the plot of this series should be intriguing for you.

While this sci-fi series is a Russian production, you shouldn’t let that stop you from watching it. This does not feel like a particularly Russian friendly plot. Not in any propaganda or government directed way, in any case. For one, a family is trying to escape to Australia and people are generally bribed quite easily.

Basically, this Netflix series is very universal in terms of plot and the production quality is very impressive.

Find out more about this new sci-fi drama on Netflix in our full Better Than Us review below.

The plot of Netflix series Better Than Us

The very simply way to explain the plot is to say that the story takes place in 2029 and features very human-looking robots. In other words, the very near future just ten years from now.

Of course, humans do still run the world, but one robot has been given “free will”. And she is definitely making good use of it.

Especially when some creepy storage worker is trying to touch her “taboo zones”. He does not get away with trying to grab her by the anything. In turn, she grabs him and he is absolutely helpless. Yeah, it’s a pretty cool moment. Especially because we have already established that the guy in question really wasn’t a good person.

Later, the very same robot decides to trust a small girl, Sonya, and makes her the primary user of herself. This ties in with the other part of the plot in Better Than Us, which features a divorced couple, where the wife is trying to move to Australia with her new husband and their kids. It’s obvious that this would be good for the kids, but Sonya’s father isn’t ready to let her go.

Robots and human – a love/hate story

From episode one, you could get the idea that Better Than Us features both elements from I, Robot and Terminator. Maybe even with a touch of Blade Runner though the future in this series is far from that dark. Also, Alita: Battle Angel is perhaps the latest example of a human-looking robot more powerful than us mere humans.

More than anything though, you can’t see pictures of the robots in Better Than Us and not think of the British series Humans. There are similarities, but at the same time, it does feel like a different story.

Overall, the storylines in Better Than Us covers some interesting questions. One of the first ones being; Can you cheat on your spouse with a sexbot? Or is that like being jealous of a toaster or a vacuum cleaner?!

Yes, this is taken directly from a real plot. But it does make sense since we’re already beginning to deal with questions along those lines in our world now.

Watch Better Than Us on Netflix now

Originally, Better Than Us began airing in Russia in November of 2018, but Netflix has released all 16 episodes in one go now. Whether you’ll be onboard for all 16 episodes probably depends on how intriguing you find the story. Andrey Dzhunkovskiy directed the series and he has a lot of experience directing TV series already. This is a very high quality result as well.

For me, it seems a bit crazy to release this series on the same day as season 2 of Mindhunter and season 1 of the Columbian series Green Frontier plus the Spanish miniseries Victim Number 8. Of course, this means there will be plenty to go around for a while and these series will probably hit home with different audiences.

Don’t miss: Our review of Mindhunter Season 2, which is out on Netflix now >

If you’re a fan of movies or TV series that features robots in the near future, then Better Than Us is definitely worth checking out on Netflix. I honestly think this series will be a positive surprise for most that give it a chance. I just fear than many people won’t discover it in the midst of all the other series being released at the same time.

Better Than Us is out on Netflix in most countries from August 16, 2019.

A family on the brink of splitting up become the owners of a cutting-edge robot being sought by a corporation, homicide investigators and terrorists.