Pooka! is the third episode of the Hulu anthology Into the Dark. It was also the Christmas episode which in itself offers plenty of horror for many. Season 1 is still airing on Hulu with a new episode being released each month.

I was iffy about Pooka! from the very beginning, purely because I was judging a book by its cover, or, in this case, the movie by its selected “cover picture” on Hulu.

Pooka! is the third installment in Hulu’s new horror anthology series, Into the Dark. Thus, seeing the movie poster below of what appears to be a stuffed animal with a candy-cane shiv in a Winona-Ryder-Stranger-Things Christmas lights ensemble made me wonder whether Pooka! was simply going to be a movie about a “scary” Furby terrorizing the villagers.

While that sounds lame, it got better. Slightly. 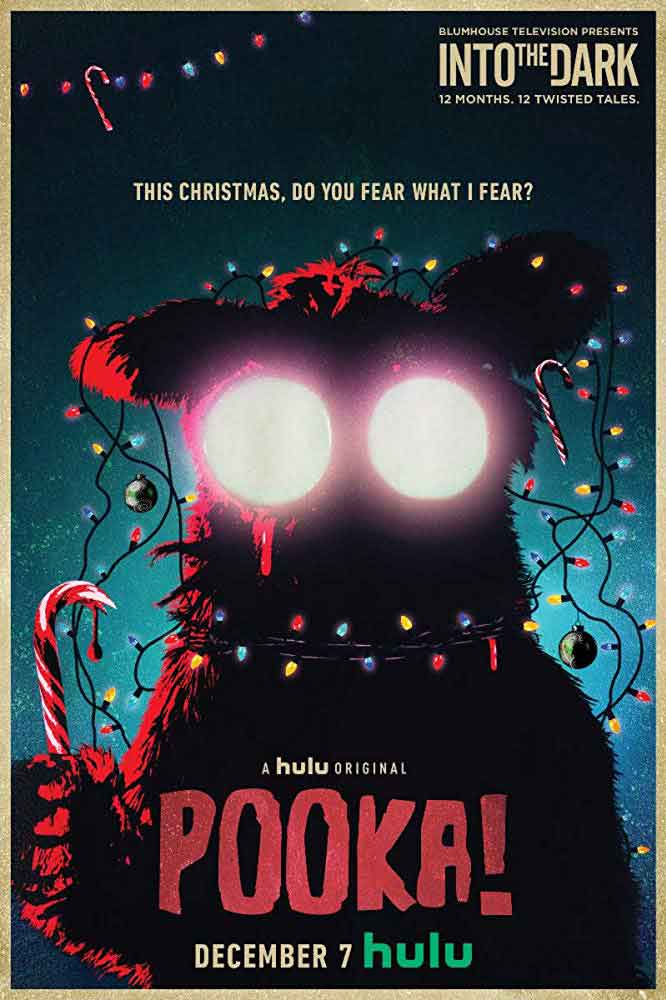 All I want for Christmas is a Pooka doll

This movie opens by the viewers meeting Wilson (played by Nyasha Hatendi), an out-of-work actor in Los Angeles looking to catch any break he can. In what starts out as an audition for The Christmas Carol (that is, the movie takes place around Christmas) turns into a strange tryout of physical exertion that ultimately lands Wilson the part of Pooka.

The hot new toy that Christmas is the Pooka doll or a toy that parrots what you say to it but in either a nice or naughty tone, which is pitched as being totally unpredictable. Wilson will be dressing up as Pooka to help advertise the toy.

However, Wilson becomes oddly reliant and dependent on the costume, while also fearing that it is “changing” him. I was initially concerned this transfiguration would be much like (if not exactly like) what happened in the 2014 movie Clown directed by Jon Watts. This wasn’t the case.

And, without giving too much away, the beginning of Wilson becoming Pooka! is really the commencement of Wilson questioning his own subjective reality and the viewers slowly disentangling his actual reality.

The psychology of Pooka!

As a psychology major in college, any movie that dives into the complexities of the human mind tends to keep me interested until the very end.

Wilson has landed this “star” role as Pooka!, and it seems like things are looking up for him.

This “new” Wilson was reminiscent of Black Mirror Season 2, Episode 3, The Waldo Moment, in which life is great, but really only for the character you play, rather than the person you are.

As he begins to question what is real and what is not, the movie also taps that feeling of uncertainty that made Donnie Darko the great movie that it is. While this movie does not match the quality of The Waldo Moment and certainly not of Donnie Darko, there were instances of (supposed) psychological disorder that kept me engaged.

Watch Into The Dark episode Pooka! on Hulu now

While I completely respect decisions to stop “boring” movies partway through, if you make it to 50 minutes into the movie, the last 30 minutes are worth watching. As of writing this, Pooka! has a 75% rating on Rotten Tomatoes, but I would give this movie 3 (out of 5) stars.

Pros: The fact that a Furby (which is already kind of creepy) could get a little creepier, supporting actor Jon Daly.

Cons: Almost too slow paced (even for a movie about a slow descent into losing control on reality).

Pooka! is definitely the kind of movie you can keep on in the background and still get the general gist of what’s going on. I wish I had been more engaged by Hatendi, but I believe this was partly due to the writing and relatively slow burn of the film.

Sometimes, a slow burn works. This time, it really didn’t.

Pooka! is on Hulu now! It’s episode 3 (Season 1) of the Hulu anthology Into the Dark.

A struggling actor takes on a seasonal holiday job as the mascot for the year’s hottest new toy: Pooka. However, after putting the costume on, he develops two personalities – one for himself, and one for Pooka.