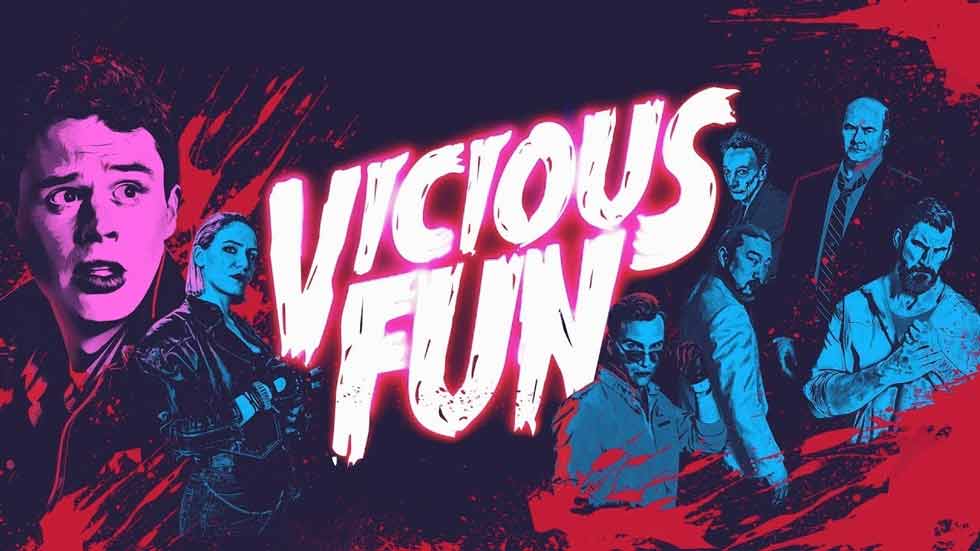 VICIOUS FUN on Shudder is a new horror-comedy with lots of fun for fans of 1980’s horror movies. From the opening scene, you’ll know if this is for you. I certainly knew this Shudder horror-comedy was my kind of movie from that first scene. Read our full Vicious Fun movie review here!

VICIOUS FUN on Shudder is a poignant horror-comedy that also serves as a total treat for fans of 1980’s horror movies. The cast is full of familiar faces while also allowing us to become familiar with newer talent.

It’s no secret that I love a good horror-comedy and yet, I so often end up a little disappointed. Or maybe it’s exactly because I do love this subgenre so much that I simply expect too much.

With this new Shudder horror-comedy, the only thing I can fault is the fact that it was a tad too long. As for the bloody horror and dark humor, I was very pleased indeed.

Too much in all the right ways

A good horror-comedy should never take itself too seriously. However, if no restraint is applied then it becomes a spoof of a horror movie with no real story. Vicious Fun is too much in exactly all the right ways. It’s extremely violent and has lots of creative deaths with lots of blood.

At the same time, there is an actual storyline with a point that you can understand and relate to. Also, there’s that wonderful “tongue-in-cheek” vibe from the very first scene until the very last. How else can you tell a story about a horror magazine writer that unwittingly ends up in a support group for serial killers?

Along with the filmmakers, I have to credit the cast with hitting all the weird and funny marks perfectly.

The cast of Vicious Fun

The absolute star of Vicious Fun is Evan Marsh as Joel. From that perfect opening scene, I wanted to smack Joel upside the head because he is so annoying. Perfectly so, because this is the point of his character and the starting point for the character arc of Joel. You might recognize the actor Evan Marsh from Shazam! or Riot Girls (both from 2019) as well as Our House (2018).

ALSO WORTH CHECKING OUT

The rest of the cast features so many both familiar and new faces. Including the always funny David Koechner who I loved in Scouts Guide to the Zombie Apocalypse (2015). Also, there’s Joe Bostick (Mr. Keene in the new It movies), Ari Millen (Orphan Black), Sean Baek (Killjoys), Julian Richings (Anything for Jackson), and the former wrestler Robert Maillet (Becky).

And yes, there are also a few women in Vicious Fun. They’re among the coolest in the bunch. Amber Goldfarb (the new Netflix series Sex/Life) is Carrie and Alexa Rose Steele (Level 16) is Sarah. The two play very different characters that turn out to be really solid people.

Vicious Fun premiered at Sitges Film Festival which is one of the very best international genre film festivals in the world. It premiered in October of 2020 and went on to screen at festivals such as Monster Fest in Australia and the Bucheon International Fantastic Film Festival which is probably the best genre film festival in Asia (and also one of the best in the world).

It was nominated for the Audience Award at Sitges but didn’t win. Spain’s own La vampire de Barcelona won that award and since the festival was during a pandemic, it’s hardly a big surprise that a “local” movie would win. Vicious Fun did, however, go on to win the Audience Award at BIFFF (Brussels International Festival of Fantasy Film).

Basically, this horror comedy has already been selected for screenings at these amazing international film festivals and when you watch it, you should understand why. It’s like a love letter to the horror movies of the 1980s while never being too serious about anything.

As a rule, one should never be too serious about anything from that iconic decade (that I also love). It’s always better to just embrace the campiness and quirky elements!

Cody Calahan is the director of Vicious Fun. We recently reviewed the previous movie directed by Cody Calahan which was The Oak Room (2020). This was a movie that also starred Ari Millen and had more of a horror, thriller, mystery hybrid feel. Even if it did also have some quirky and funny moments along the way. And yes, it’s also worth watching!

The screenplay was written by James Villeneuve who gets his feature film debut with this horror comedy. Overall, Vicious Fun has so much going for it in terms of hitting all the marks for me. It’s a horror-comedy that takes place in the 80s and almost becomes a spoof at times, while also being very bloody and focused on the horror elements. What’s not to like!

Vicious Fun follows Joel (Evan Marsh, Shazam!), a caustic 1980’s film critic for a national horror magazine, who finds himself unwittingly trapped in a self-help group for serial killers. With no other choice, Joel attempts to blend in with his homicidal surroundings or risk becoming the next victim.