IT CHAPTER TWO is here at last and yes, it is well worth the wait. Finally, we get an adaption of the ending that the miniseries from 1990 just did not deliver on. Get ready to return to Derry and – of course – Pennywise. Read more in our IT Chapter Two Review here.

IT Chapter Two is finally here and it’s one hell of a whopper with a runtime of 2 hours and 50 minutes. To me, it didn’t feel long at all. Instead, I was completely entranced with returning to Derry.

And yet, I will admit that the final showdown, between Pennywise and our beloved Losers Club kids-turned-adults, was not my favorite part. It was nothing that ruined the experience for me but I do still want to mention it.

For me, the strength of IT Chapter Two is the story of the adults returning to both a town and friends they had forgotten. We’ll get into that and a lot more in our full IT Chapter Two review below.

From the second the cast of IT Chapter One was revealed, people started guessing about who would be playing the adult versions. It didn’t take long for people to pick Jessica Chastain as the absolute favorite to play Beverly Marsh. She was also one of the first cast member of IT Chapter Two to be revealed and yes, she is perfect as Beverly Marsh.

Also, Jessica Chastain did know director Andy Muschietti already since they’d made the horror movie Mama together. Another actor who’s been in Mama and both IT movies is Javier Botet. Oh yes, he’s back again!

The entire adult casting of the Losers Club is absolutely brilliant. James McAvoy just works so naturally as the adult Bill, who was and is still the unofficial leader of the group. However, he is also still hurting from loosing Georgie to Pennywise in IT Chapter One. Be sure to read our IT Chapter One review here, if you haven’t already >

While everyone is so well cast and manages to both look and act like the child actor of their character, there are a few standout performances, I need to mention. Bill Hader is spot-on as the adult Richie Tozier. He could so easily have gone over the top, but he doesn’t. Bill Hader works perfectly within the style and tone of voice of this character in his first horror movie role ever. 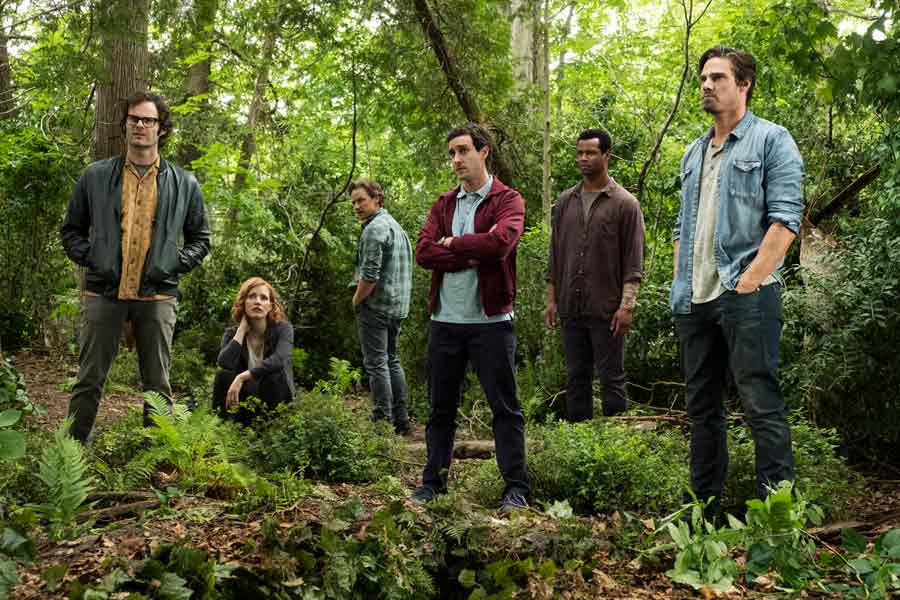 Awesome cameos in IT Chapter Two

IT Chapter Two doesn’t just have a wonderful cast, it also has some awesome cameos. Obviously, director Andy Muschietti managed to sneak into a scene where he can be seen clearly in the background (at the pharmacy).

Also, author of the book it’s based on, Stephen King, is in IT Chapter Two. To call Stephen King’s scene a cameo is definitely underselling it. He has an entire scene with quite a bit of dialogue and interaction at a pivotal point in the story. And yes, it’s absolutely brilliant. I could not stop smiling as that scene was playing out! Then again, I am a huge fan of Stephen King.

Finally, you need to stay alert to catch one of the best cameos in IT Chapter Two. We get one of the original child actors from the 1990 miniseries adaption of IT. It’s Brandon Crane who played little chubby Ben Hanscom as a child in the miniseries. Brandon Crane appears on screen right as we’re about to see the adult version of Ben Hanscom.

If you’ve watched both the 1990 miniseries and IT Chapter Two then your brain might create a weird conclusion that you know can’t be right. In the best kind of way since it’s obviously the director playing with fans of this universe.

To anyone who didn’t feel that IT Chapter One delivered on horror and gore, you should be very pleased with IT Chapter Two. They are not holding back in any way, shape or form. At times, even the smaller stuff can be a lot creepier than the huge things. But hey, maybe that’s just me.

In fact, some elements of IT Chapter Two reminded me of the new Hellboy reboot, which did not hold back either. The effects are awesome and intense. Though I must admit, one of the toughest scenes is actually a very realistic homophobic attack. A hate crime that is all too familiar in the real world. Xavier Dolan is perfect in this scene, which does not end well for him!

If you’ve seen any of the teaser scenes or clips that have been released, then do not fear; You ain’t seen nothing yet. As opposed to other trailers that show you all the good stuff, the IT Chapter Two teaser material has only shown you the beginning of the horror. Everything is more crazy and violent that you’ve seen in clips.

You should be excited about IT Chapter Two

As I mentioned earlier, the actual final showdown is not my favorite part of the movie. And yes, Pennywise does turn into a spider again, but it’s nothing like it was in the 1990 version. To compare the two would be like comparing Finding Nemo to Jaws.

Also, I have to both respect and salute the fact that screenwriter Gary Dauberman and director Andy Muschietti are doing their best to stay true to the book. As much as possible without showing things that you simply cannot (and should not) show. Readers of the book will no doubt know what I’m referring to.

It is so obvious to me that Any Muschietti absolutely loves this Stephen King universe of Derry, the Losers Club and Pennywise. He has done his best to stay true to the story while also making necessary cuts. And he has succeeded!

IT Chapter Two will be out in US theaters from September 6, 2019. And the rest of the world around the same time as well.

Twenty-seven years after their first encounter with the terrifying Pennywise, the Losers Club have grown up and moved away, until a devastating phone call brings them back.