THE VIGIL is a new horror movie from IFC Midnight and you do not want to miss out on it! It has an interesting story that comes from ancient lore and offers moments of pure terror. You’ll want to check this one out. Read our full The Vigil movie review here!

The Vigil is a new horror movie and it will offer moments of pure terror. It certainly did for me, in any case. This is also a supernatural horror movie based on ancient Jewish lore, superstition, and demonology. Something I am not at all familiar with, but which I’ve seen covered in so many movies where the story is based on Catholic beliefs.

For that reason alone, I thought this was a brilliant concept. Everything feels so familiar and yet also very fresh and new – all while being based steeped in beliefs that are very old.

Continue reading our The Vigil movie review below.

I don’t mean to say that this is just a “Jewish version of The Exorcist” because it definitely isn’t. Both because The Vigil doesn’t in any way attempt to imitate that iconic horror movie, but mostly because this is more elegant. Look, I love The Exorcist as much as the next horror fan, but elegant is not a word I’d use to describe it.

The Vigil is the kind of horror I would actually describe as being elegant in its approach to horror. Simply by the way it brings moments of pure horror and terror to both its characters and audience. It reminded me a bit of The Night which we also reviewed recently. Even though I found The Vigil to be much scarier!

This supernatural horror movie plays out over one night in Brooklyn’s Hasidic Borough Park neighborhood. During this one night, I only felt very briefly that the story was going a bit too slow. Then things picked up speed and my slow-burn remarks had no bearing whatsoever.

Mostly, I ultimately enjoyed watching The Vigil because it is so well made and made me jump in my seat more than once. Not because of classic jump scares, but simply due to well-timed chilling moments that made me want to both stare and look away. 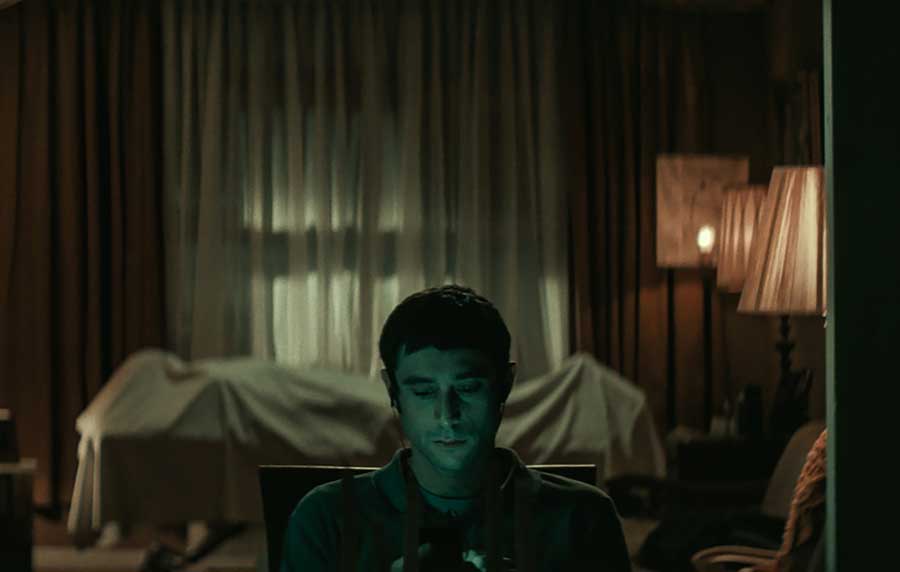 A small but strong cast

As most of the plot in The Vigil plays out in that one place over the course of one night, the number of characters isn’t too big. The main protagonist is Yakov Ronen. He recently left his insular religious community and is struggling to find his way in the world.

Mostly, he also needs to make some money, which is why he reluctantly agrees to take on the “shomer” responsibility for one night. At first, everything seems fine even though the widow, Mrs. Litvak, tries to make Yakov leave. For most of the movie, Mrs. Litvak and Yakov are the two characters paramount for this movie.

Yakov is portrayed amazingly by Dave Davis, who seems both broken and yet impossible to break. You may know Dave Davis from season 1 of True Detective or bit roles in big series such as The Walking Dead and Lucifer. With his performance in The Vigil, I really hope he’ll break into genre feature films after this. He did an excellent job as Yakov.

As Mrs. Litvak, you’ll get to see a breathtaking portrayal by Lynn Cohen. You may know her as Mags from The Hunger Games or her portrayal of Golda Meir in Spielberg’s Munich (2005). Or maybe as a Judge on Law & Order where she did 12 episodes over the course of more than two decades.

Sadly, Lynn Cohen passed away on Valentine’s Day in 2020 at the age of 86. However, she made more than a handful of projects after this movie, so there’s still more to come.

Watch The Vigil in select theaters and On-Demand

Keith Thomas is the writer and director of The Vigil and he is definitely on our radar now. Those psychological moments of pure terror as well as the very visceral ones are exactly what works for me! All of them are apparently based on nightmares and bad memories from Keith Thomas himself, which makes me think that there must be much more.

And, as bad as I feel for saying this, I’m happy if this means he has more movies like this one in him.

Since we review both genre movies and series here at Heaven of Horror, I tend to watch new horror productions almost daily. And despite my “ScreamQueen”-moniker, I’ve come to realize I’m quite tough by now. Still, The Vigil managed to get to me in many different ways and I felt that old familiar creepiness that made me fall in love with the genre.

You know, the kind that makes you feel alive because you feel certain you could die from the next thing on the screen? Do I sound thrilled with this new horror movie? Good, because I definitely am!

Steeped in ancient Jewish lore and demonology, THE VIGIL is supernatural horror film set over the course of a single evening in Brooklyn’s Hasidic Borough Park neighborhood. Low on funds and having recently left his insular religious community, Yakov reluctantly accepts an offer from his former rabbi and confidante.

He takes on the responsibility of an overnight “shomer,” fulfilling the Jewish practice of watching over the body of a deceased community member. Shortly after arriving at the recently departed’s dilapidated house to sit the vigil, Yakov begins to realize that something is very, very wrong.