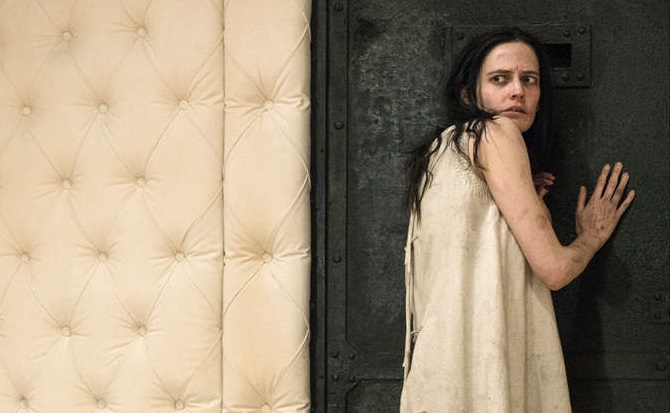 This episode was all about Vanessa Ives, which means Penny Dreadful gave us the gift of the remarkable Eva Green for an entire episode – with some amazing acting from Rory Kinnear and Patti LuPone as well

The people behind Penny Dreadful like doing that thing, where they take the true star of the show – I am, of course, talking about Eva Green – and let her rule an entire episode. And yes, I do mean rule! In all fairness, I should note that The Walking Dead have done the same thing, where we follow one character and their storyline for an entire episode, but still, it’s nothing as intense as what this episode delivered.

We begin where last episode ended; Vanessa Ives (Eva Green) talked Dr. Seward (Patti LuPone) into putting her under hypnosis to find out who “The Master” is, since one of his minions told her she had in fact already met The Master when she was “in the white room, without time”. Brush up on the previous episode, with our recap, if you don’t know what I’m refering to. Vanessa knew which “white room” the reference was about, since she had spent five months in an asylum, when she had first been touched by the devil. However, she doesn’t remember much and that’s why she wants to be put under. First memory that comes to her is a person; An orderly, who is none other than the man, who we know as “The Creature” now. Yes, Frankenstein’s very first creation, who killed his second creation and forced him to create the third one – you can’t help but love Penny Dreadful with its elegance in weaving these stories together. 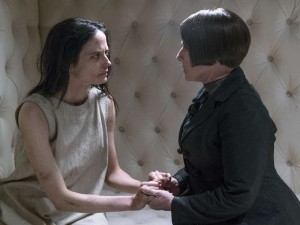 Anyway, back to the hospital – or asylum – which is an awful place, and the only person Vanessa remembers is this orderly (Rory Kinnear). She says he’s the only person, who ever comes into her room (or cell, is more like it), but it’s probably the only kind face in that place and so it’s the only one she remembers. He obviously cares about her well-being and clearly hates it, when he has to force-feed her because she has decided to starve herself to death.

Nothing seems to be getting better and the orderly grows increasingly worried, telling her the treatments won’t stop or deminish, but only get worse, and “hydra therapy” will be next. He returns the next day to see a drenched and cold Vanessa sitting on the floor, and comes back with a blanket. Unfortunately, this wasn’t exactly protocol, so he returns for the blanket later and Vanessa attacks him. He wrestles her off and if about to punch her, but stops himself. 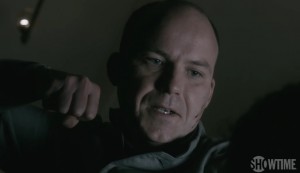 This does however seem to be a turning point – and not only because she’s put in a straight jacket after this. She apologizes and slowly, but surely, they get closer as the orderly tries to talk to Vanessa and figure out why she’s there, since she’s clearly not as far gone as many of the other patients. Whenever Vanessa asks him a personal question, he says it’s not allowed for him to tell her these things, so instead he talks about her and tries to relate to her. However, he does end up telling her about his wife and son, and you can tell he loves them deeply and is just a really good man. Vanessa tells him that she’s there because she’s failed her best friend, Mina, and has been touched by the devil.

As the orderly leaves the room, and she says she knows he doesn’t believe her, he turns and his eyes turns dark as he states that of course, he believes her because “After all, I was there”. I was so happy to find out Vanessa immediately knew this wasn’t the orderly speaking, but someone else taking over his body. However, Vanessa has now seen the eyes of The Master and is ready to leave the hypnosis. Unfortunately, this is when Dr. Seward – who also enters the cell with Vanessa, when they talk and interact – has to tell Vanessa that she has already been trying to pull her out, but to no avail. She even tried burning her hand with a cigarette, but Vanessa’s mind and body are disconnected as if she was in a coma.

The only way to get out is to go through it, so they continue. Vanessa still isn’t getting better and now she’s got a permanent gag placed as well. The orderly sneaks in a hair brush and some make-up and tries to make Vanessa feel human again. Just removing the gag is a sad moment, where he has to close her mouth since her jaw was locked in place from having had a gag in so long. He does his best with the make-up and tells her he’s doing the best based on what his wife told him to do with the make-up, because he talks to his wife about her and tells Vanessa as much. He holds up a mirror and finally convinces her to look at herself and see who she really is and asks her to try and find her way back to this woman.

Then he takes out a book of children’s poems and starts reading, as she had told him earlier that she loved poetry. Before leaving, he has to mess up her hair again and remove the make-up. He is clearly very upset that he can do all this, when she has no choice and tells her that soon “No one will touch you without your consent”. He also reveals that it’s Christmas Day and finally tries some tought love, saying she must get better, because one of the next steps will be cutting off her hair, opening her scull and starting to cut out parts of her brain. And no one ever returns from that particular “treatment” as themselves. It’s so heartbreaking, but he still doesn’t seem to be able to get through to her. 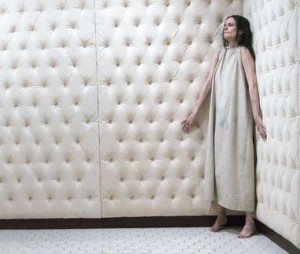 The next time he sees her, they sit down to talk and he asks her to explain again what happened that made her end up there. She starts to explain that the devil touched her and when wondering why the devil would want her in particular, the orderly’s eyes turn dark and Lucifer himself takes over and says he loves Vanessa and wants him by her side. Vanessa is terrified, but tries to be smart and talk to him to figure out the how and why. Lucifer – still in the body of the orderly – tries to convince Vanessa to rule the world and all its inhabitants with him and just as he seems to be getting through to her, another voice starts booming from the walls and ceiling of the cell. Suddenly, we have an extra orderly in the room. Lucifer is sitting dark eyed in the corner of the room and now we have one with red eyes (clearly, this is The Master) and he wants Vanessa as well. While Lucifer wants Vanessa’s soul, this new being – who is another fallen angel and Lucifer’s brother – wants Vanessa’s flesh. Once again, she allows him to talk and asks his name, which is (of course!) Dracula.

Having both their names, Vanessa steps back from both brothers and makes it very clear that she only has one master and protector and that’s the almighty God. Then something happens that makes me think Vanessa Ives is actually the most powerful of anyone or anything, as she tells them they’ll never have her, and starts reciting something while she begins to levitate! I mean, it was like seeing Jean Grey in X-Men or Galadriel in Lord of the Rings:

Oh HELL yes… Vanessa Ives is my Lord and Savior!

After having told off Lucifer and Dracula – who both vow to get her and will make grand plans to haunt her forever – she blinks and comes back to herself, where she’s still sitting across from the kind orderly, who never got the answer to his question about why the devil would want Vanessa Ives instead of someone else. Vanessa says she’s tired and he leaves. Unfortunately, when he returns to see her later, her hair as been cut off. She had tried to be kind and soft-spoken, but when the doctor had asked about religion, she professed to trusting God. Obviously, this meant she was still crazy, so they’ve prepared her for surgery. The orderly then tells Vanessa that he will be leaving. When talking with his son about how no one can live all alone and with no one to love them, he had started crying and couldn’t stop, because he thought of Vanessa. He promises to stay one last day and will make sure the last face she sees before surgery will be his, because then it will be the face of someone who loves her.

This is when Vanessa finally comes out of the hypnosis and Dr. Seward is quick to pour them both a large drink, as Vanessa inspects the cigarette burn on her hand. Then Vanessa says she’s ready to fight because she now knows the name of the one she’s fighting and it is Dracula.

If Eva Green doesn’t start winning awards for the role of Vanessa Ives soon, then there’s something very wrong with the world. She turns herself inside out, no vanity or holding back anything. Also, Rory Kinnear and Patti LuPone are so damn amazing, they should be right there with her winning awards of their own. This episode was almost like watching a stage play in a theater, and it was pure magic… or some sort of divine inspiration, perhaps?!

After receiving a clue about a past experience, Vanessa convinces Dr. Seward to use a new form of therapy, hypnosis, to take her back in time.

We’ll be back next time with a recap for Penny Dreadful episode 5, which you can watch the promo for right here: