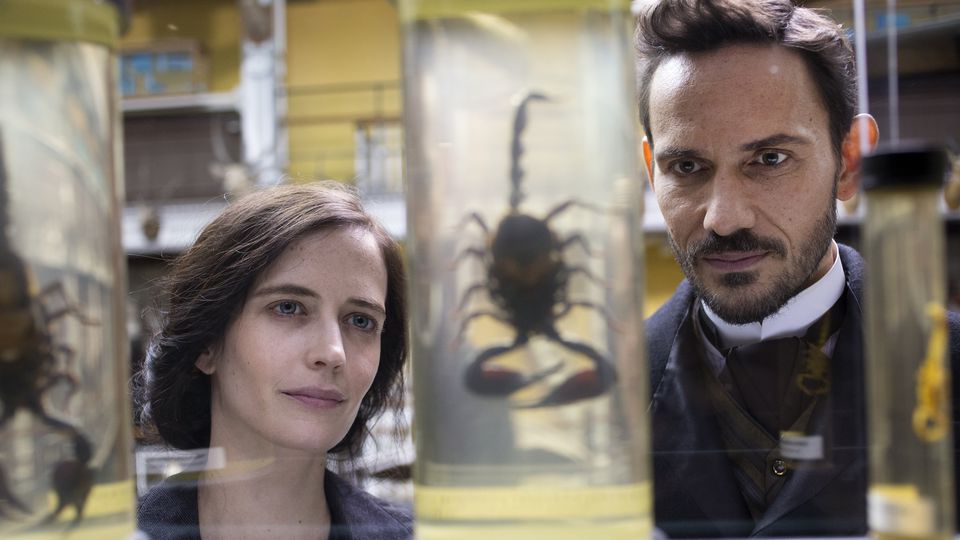 It feels like we’ve been waiting forever since the amazing season 2, but – like we’ve already said – the Penny Dreadful season 3 premiere definitely lived up to our expectations

Penny Dreadful season 3 starts a while after the previous season ended, but not much has changed, since everyone was either completely broken or had a very specific path laid out in front of them. That’s why Sir Malcolm (Timothy Dalton) is in Zanzibar to bury Sembene (Danny Sapani), who lost his life at the werewolf claws and teeth of Ethan Chandler (Josh Hartnett), who is now in chains in New Mexico. He’s being escorted back to New Mexico to be prosecuted. The Creature – aka Dr. Frankenstein’s first creation – is on board a ship caught in ice with a crew that’s both freezing and starving to death, while Dr. Frankenstein himself is locked up in his office – and busy shooting up drugs – trying to figure out how to win back, Lily (Billie Piper), his third creation.

Quick reminder: His second creation was killed by his first creation while his third creation was made to keep his first creation company. To put it mildly, Dr. Frankenstein’s hand was forced and while Lily didn’t take a liking to The Creature, she did fall for Dorian Gray (Reeve Carney), but then the good doctor found himself helplessly in love with Lily. However, since Dorian Gray also fell for Lily – and they realized they were both far superior to the common mortal human – they’ve shacked up and are looking to take over the world. We don’t see Dorian Gray and Lily Frankenstein in this season 3 premiere, but we’ve already been told that they will have a huge story arc this season, so no need to worry. 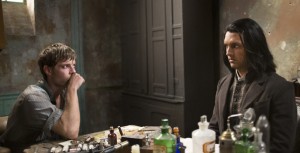 Also, Dr. Frankenstein is getting help from an old friend, who is none other than Dr. Jekyll (Shazad Latif), who is convinced he can help eliminate the bad in Lily, so only the good remains. Yeah, and we all know how well that’ll turn out. Don’t we, Mr. Hyde?

But back to the real star of this show; The tortured heart and soul of Vanessa Ives (Eva Green). Miss Ives is not really herself, as she has retreated to an apartment, where she’s holed up and does absolutely no cleaning or cooking, so the place looks pretty scary. Oh, and no shopping either, but she does have food delivered, which she devours with pure animal greed, when it arrives. Right there on the floor, teeth into a loaf of bread and milk straight from the bottle. Yeah, she’s a mess!

Fortunately, the fabulous Ferdinand Lyle (Simon Russell Beale) comes to her rescue. After receiving no replies to his letters, he shows up on her doorstep and she lets him in. He tells her of a doctor who helped him, when he realized he was different and on his way to end his own life. This doctor helped him accept himself, and so he owes her everything and believes wholeheartedly that the good doctor can help Miss Ives, as well. 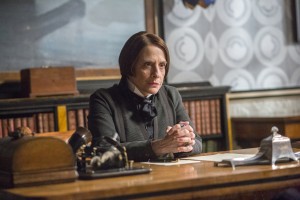 He sets up an appointment as she agrees to this and, fortunately, she actually goes. Upon arrival, she quickly realizes the doctor has a striking resemblance to the tough loving witch, who helped her get back on track in the previous season (in flashbacks). The good Dr. Seward is related to the witch, which explains the resemblance. Well, that and it’s the same actress, the amazing Patti LuPone.
Horror fact: There’s also a Dr. Seward in Bram Stoker’s Dracula, so the name is probably not a coincidence.

In any case, there’s the most amazing scene between the two women, where Dr. Seward continues to call out Miss Ives whenever she’s not completely honest. It’s tough, beautiful and completely breathtaking. The doctor accepts to take on Vanessa as a patient and she’s given a task immediately: To do or try something she’s never done before. She follows this advice immediately, when she goes to the museum of zoology and end up meeting Dr. Alexander Sweet. This character is played by Christian Camargo, who looks very different, but we still recognize him as the the Ice Truck killer (and Dexter’s brother) in Dexter, so we know he’s a master of being two-faced. Though we do hope Vanessa will have a true friend – and love? – in this new sweet doctor. And yes, his name was Dr. Sweet.

Especially since the secretary at Dr. Seward’s office is being chased down by the same beings, who continue to follow Vanessa around. In the season premiere we find out, that this time around it’s none other than Dracula himself, who wants the dear Miss Ives. Quite an amazing (voice only) introduction we get to that iconic character. Loved it!

Meanwhile, The Creature is starting to remember who he was as a human being – a husband and father – and embarks on the journey home. Being immortal and therefore indifferent to the cold, he simply gets off the ship and starts walking. Oh, but not until he’s done singing a lullaby to a dying boy, and then snapping his neck. A true mercy kill… and possible dinner for the few, but very starving, remaining crew members, who were torn about whether to eat him or starve themselves. 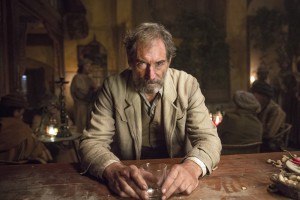 Oh, and Sir Malcolm is almost robbed in Zanzibar, but is rescued by a Native American, Kaetenay (Wes Studi), who scalps one of the people he kills as he saves Sir Malcolm. “Old habits die hard” as he says. Indeed they do, and Sir Malcolm is still up for another adventure, which this time leads him to New Mexico to help Ethan. Okay, the adventure isn’t exactly his own idea, but Kaetenay has been following him for quite some time and insists they need to help Ethan.

Before Sir Malcolm and his new friend have even left Africa, some old friends of Ethan – and the witch daughter, Hecate (Sarah Greene), from season 2, who was always wanting to get her claws into him – are on board Ethan’s train in New Mexico. They manage to get Ethan away from a small army of marshalls, to welcome him home. Ethan doesn’t exactly look happy, but then again, he never had any desire to return home.

That’s about it for the first episode, which took place the day Tennyson died, so now we know the current storyline is placed in October of 1892. Lord Alfred Tennyson died on October 6, 1892.

We are so excited about this amazing season 3 premiere of Penny Dreadful and can’t wait for next weeks episode, where we’re bound to see what’s going on for Lily Frankenstein and Dorian Gray.

Ethan is a prisoner under Inspector Rusk’s watch heading through America. Sir Malcolm meets a mysterious native american while in Africa. Frankenstein gets a visit from an old friend: Dr. Jekyll. Vanessa seeks the help of a very intriguing and interesting doctor.

We’ll be back next time with a recap for episode 2, which you can watch the promo for right here: