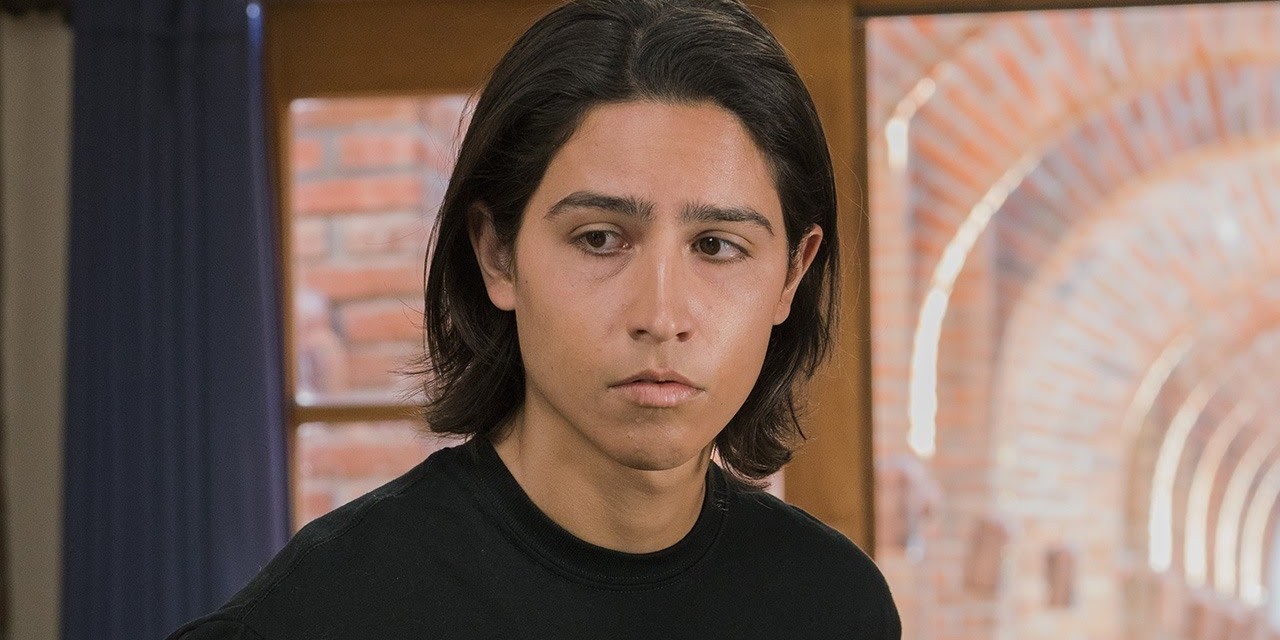 Another week, another Fear The Walking Dead recap and this time it’s for episode 6, which is officially titled Sicut Cervus. Last week the group – especially Madison and Alicia Clark – dealt with the group that had followed them because they wanted “The Abigail”. So we’re not worrying about them any longer, but that certainly doesn’t mean we’re not still dealing with other people more than “The Dead”.

First thing we see in this Fear The Walking Dead episode is a church in Mexico, where the priest is doing his best to keep his flock together. However, immediately after the sermon, everyone begins bleeding from their eyes just as Thomas Abigail arrives and tries to reason with them. It turns out they believe Celia is an evil woman, who is responsible for all this. Celia is the woman, who’s in charge of the Abigail household and treats Thomas as her own son.

Next up, we see “The Abigail” arrive at the coast of Mexico, and after a struggle with customs, who are not as easily bought as Strand and Luis expected, the customs officers and Luis ends up getting shot. Daniel is quick to end them all completely by driving a knife into their skulls, but Luis reaches into his pocket for a coin with an owl on it, and asks that they give it to his mother. Daniel throws it into the water, as he seems to recognize it – or at least know what it means – and looks like the most heartless person in the world.

Right before the customs issue, Travis is talking to his son (yes, annoying teenage son). Chris finds out that Madison has confided in Travis that she didn’t believe Reed was sick, when Chris shot him – something that we all know is true, since he woke up as one of “The Dead” a while after Chris shot him. Chris is obviously very hurt and angry that Madison didn’t believe him when she said she did. What she meant was probably that she believed Chris believed Reed was sick. And even that’s a stretch because really, Chris is going from annoying to psycho as we’ll soon have confirmed. 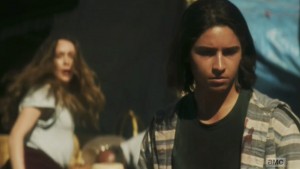 The entire group arrive in Mexico and one of the first things they encounter are some bodies in the village with the church. However, there are far too few bodies compared to the amount of people we saw in the beginning of the episode, and the rest – now “Walkers” – are quick to show up. They all begin fighting off – and killing – all of the “walkers”, but both Nick and Daniel are having problems with killing the children among those attacking them, but others are quick to help out. You’ve got to hand it to them, this Fear The Walking Dead group is pretty badass so early on in the world of Walkers.

Chris on the other hand eyes a chance to get rid of Madison, as she’s trapped under a “Walker” and he just stands there watching instead of helping. Alicia sees this and calls him out, but still he does nothing, so she runs past Chris to save her mom. 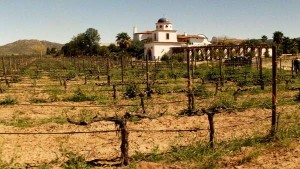 They finally arive at the Abigail estate, where life seems to be going on as usual, and are immediately invited in. They just have to give up their weapons. Daniel is the only one to question this, but finally agrees. He obviously doesn’t trust Celia either and when he talks to her in her office later, he sees communion wafers  and realizes she was responsible for the village becoming “walkers”. Though he also realizes she doesn’t see them as dead. It’s just that they’re passing on to another life and instead of being souls walking around, they still have their bodies. Yeah, it sounds dangerous… and like a cult of sorts!

Meanwhile, Nick is buying everything Celia is trying to sell, as he’s tired of killing. Celia offers him some food and her worldview, which Madison hears and is then quick to get Nick away from Celia. Also, telling Celia that her son is very impressionable. Something I think Celia already felt and didn’t need to get confirmed.

Later in the afternoon, Chris tries to talk to Alicia about earlier incident. Or rather, he tries to convince Alicia that he froze and that she misunderstood his actions – or lack thereof. Alicia doesn’t buy this excuse and Chris threatens her instead – saying people could get hurt if she says anything to anyone – which isn’t exactly helping his situation. 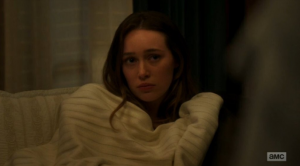 When Madison finds her daughter half asleep on the couch – enjoing having a TV again – Alicia tells her mom what happened at the church and Madison goes directly to Travis, to figure out what he talked to Chris about on the boat. Obviously trying to find out if there could be a reason Chris wanted Madison dead. Travis and Madison fight, since Travis seems to be feeling something is off with his son and wants Madison to help, just like he has helped with Nick in the past. Madison fails to accept the comparison – and I definitely agree with Madison on this one – since Chris is a threat to their lives and not his own. She stays with Alicia for the night and Chris sleeps in the same room as his dad. 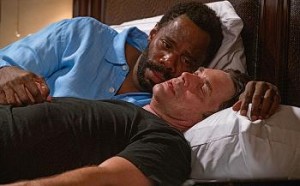 Unfortunately, I’ve been saving some of the worst news for last, since Victor Strand arrives to the Abigail estate to find his beloved Thomas has been bitten. Thomas is already very sick, but is hanging on and still awake. This scene between them is so sad and the love is very obvious, which is why it’s not that surprising when Strand suggests he could go with Thomas, when he needs to leave this life.

That’s something Celia is quick to accept and wants to help Strand with this plan. Apparently, this is the moment when she finally respects Strand and accepts his relationship with Thomas. She brings them – what else – communion wafers and lets Strand know it won’t take long for them to kick in.

Ofelia meanwhile has asked Nick to join her for a walk, which leads to a sanctuary, where Ofelia wants to talk to her mom. She’s worried about her dad, Daniel, who didn’t even want to eat dinner at their new home. And yes, Daniel is clearly hurting, but not talking to his daughter. While Ofelia is praying and talking to her deceased mom, Nick looks at an owl carving in the tree above them, which seems to trigger memories from his life as a drug addict. More precisely, memories from the series pilot, when he was the first to see “The Dead”.

Daniel is also out walking and he comes across someone throwing a live dog down a shaft, and then hears growling and then howling from the dog. Yes, this pisses me off – my biggest pet peeve is animals being harmed in movies – but at least we didn’t see it happen and I respect this. Daniel walks around some more and see a boy talking to someone just out of Daniel’s line of sight. The boy lets Daniel come in to the building and he sees a jail cell filled with Walkers and the boy is talking to his mom, who is now one of The Dead. Celia seems to really have a very different view of what these being are.

Chris wakes up and sneaks out on his sleeping father, and does exactly what we’d expect. He goes to Madison and Alicia’s room and tries to call out to Alicia. When she doesn’t react, he goes into the room and grabs a knife from Madison’s bedside table just as a gunshot goes off, which wakes up mother and daughter.

Alicia sees the knife and has to tell Chris to get out several times before he finally runs off. I have no doubt that some “reasonable” explanation will come, but I’m not buying it and I hope this isn’t the beginning of some redeeming storyline because they’ve let Chris go too far for that.

We then see that the gunshot wound was Strand putting a bullet in Thomas’ head, so obviously, he has decided against joining him in the afterlife. Something Celia is bound to be disappointed by.

So yeah, that’s pretty much it… annoying son is now Psycho son and Thomas Abigail’s surrogate mother is some sort of Cult leader, who keeps “The Dead” around (yes, just like Hershel did at the Farm in season 2 of The Walking Dead). 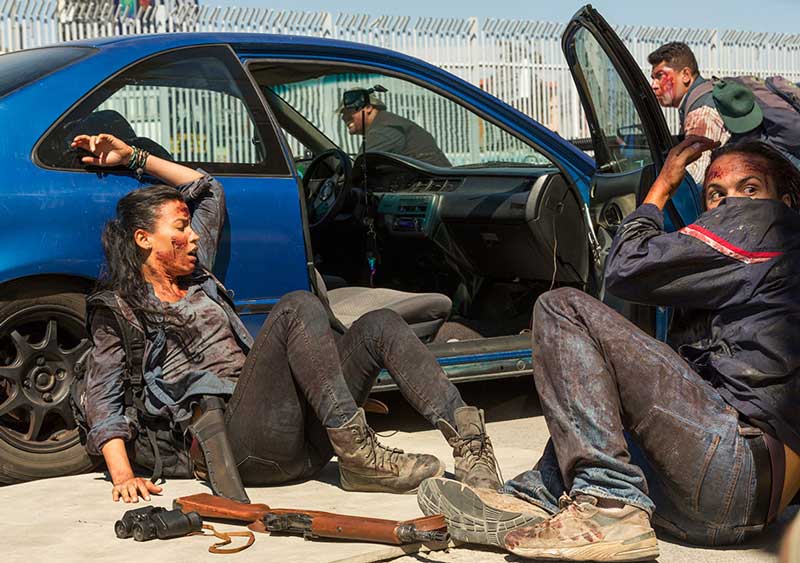 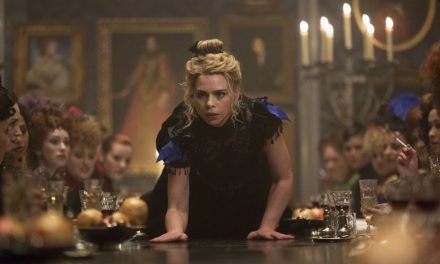 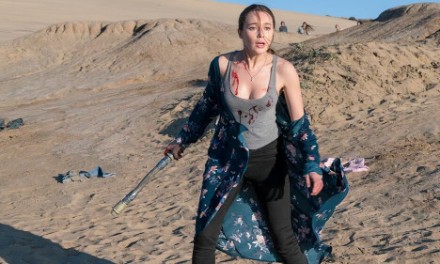 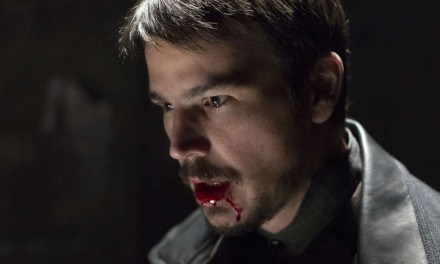