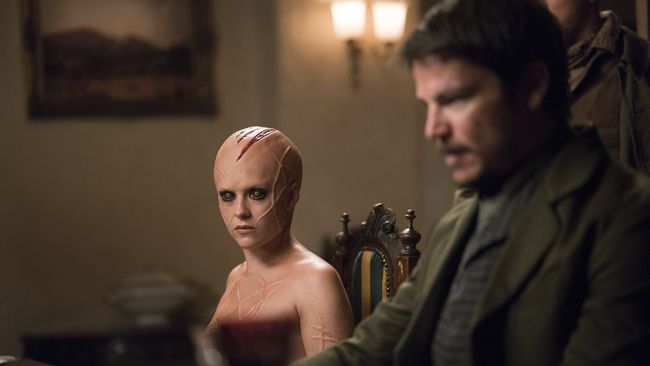 This week on Penny Dreadful we witness tough decisions made by Ethan, Lily and Vanessa Ives as they fight their past lives, to find freedom in the future. All actions are meant to move them forward, but most could result in huge setbacks!

Last week we found out what Ethan’s (Josh Hartnett) backstory was all about while he became a lot closer with Hecate (Sarah Greene). The episode ended on quite a cliffhanger as Ethan’s father, Jared Talbot (Brian Cox) was aiming a gun at Ethan and demanding that he repent all his sins or else suffer the consequences. Ethan stated he was done repenting and we pick up exactly where we left off last week. Fortunately, murder is avoided as Bartholomew Rusk (Douglas Hodge) and Marshall Franklin Ostow (Sean Gilder) comes to arrest the entire family. However, practicality – and Southern hospitality – means they all sit down for a meal first. Big mistake. Huge! 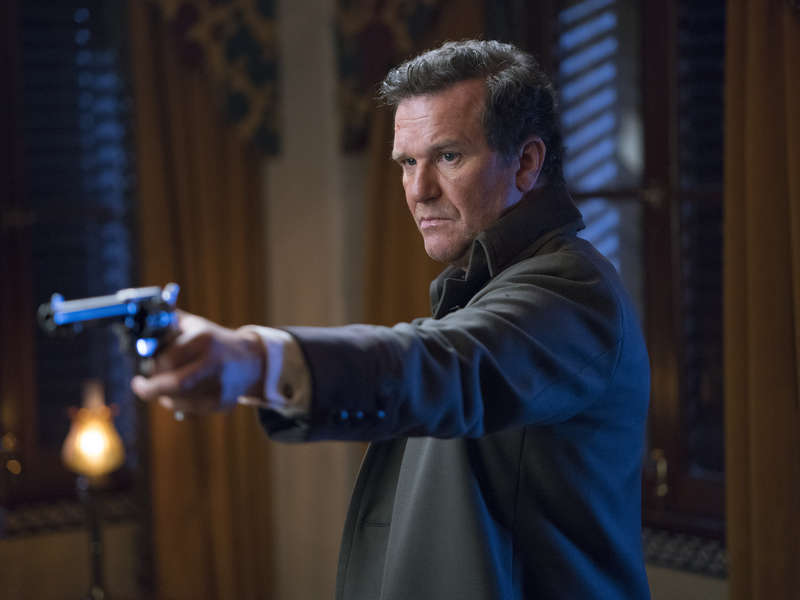 First Ethan has to say grace – father insists even though Sir Malcolm (Timothy Dalton) tried to get Jared to leave his son alone – and Ethan says the Lord’s prayer, but in a somewhat alternative version… basically, he turns it completely upside down. They begin eating, and Ethan, Hecate and Jared all dig in, while the rest of the table (Rusk, the Marshall and Sir Malcolm) are thrown for a loop. Basically, everyone is on edge as both Jared and Rusk wants Ethan dead – and each wants to take the lead on their own revenge – while Ethan wants his own father dead and Hecate wants everyone except herself and Ethan dead. Also, Marshall Ostow keeps eyeing Jared, who calls him out on it, only to find out that he also wants to kill Jared, because he was responsible for killing all the Marshall’s men, when they sprung Ethan from the train ride in the beginning of the season. That sounds fair to Jared, who then pulls out a gun and shoots the Marshall. No biggie, he just wants to enjoy his final meal without someone giving him the evil eye, and the Talbot estate has plenty of armed men around the table, so Rusk doesn’t do anything about it. 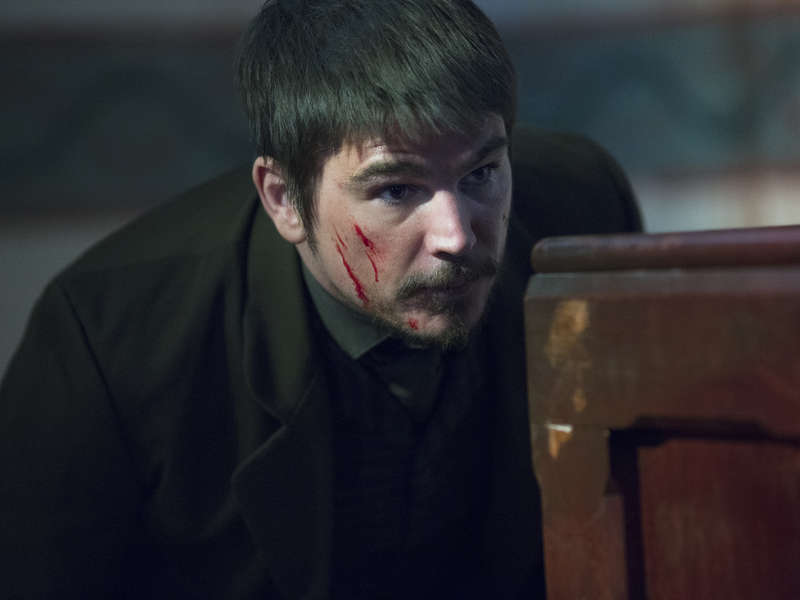 Hecate keeps whispering to Ethan “Just say the word” and that makes Rusk ask whether it was her or Ethan, who summoned the snakes. Before you know it, everything goes to Hell, and Hecate shifts into her naked, bald, and scarred shape and everyone starts shooting. In the end, only Rusk and Hecate are shot. We kinda knew this was probably coming since the season 3 trailer showed Ethan coming back to London and Vanessa Ives. Hecate’s parting words to Ethan are that they’ll see each other in Hell. Sir Malcolm is very close to being shot, but Kaetenay (Wes Studi) shows up at the very last second and saves him. He also looks remarkably well for someone, who was dying of a snake bite, when he was left in the desert. Ethan is now going after his father, who yet again retreats to the chapel, where Ethan proceeds to fight off all Jared’s men with the help of Sir Malcolm and Kaetenay. This time Ethan has Jared at the receiving end of the barrel of a gun, but Ethan shows mercy and decides not to kill his father. However, Jared keeps yelling after his son and vows to hunt him down again, so Sir Malcolm shoots Jared Talbot in the head. Enough is enough, and they need Ethan to be free of his past. 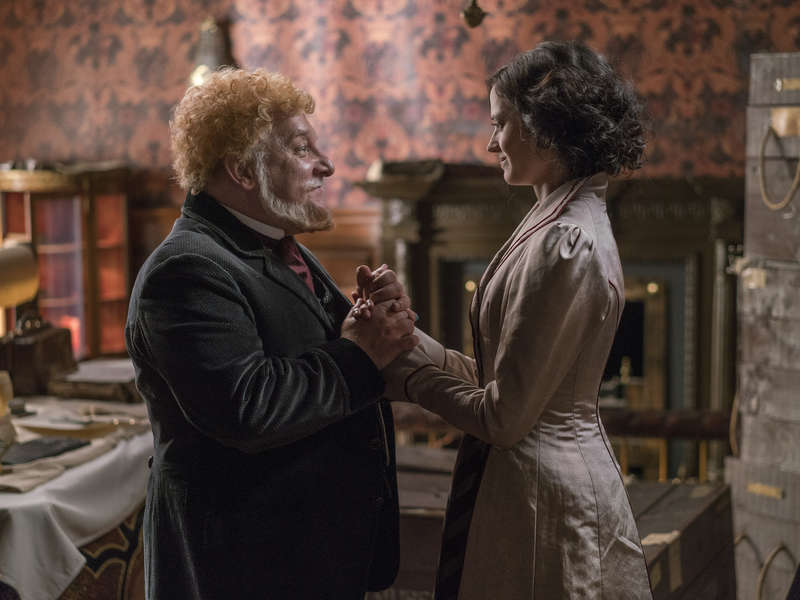 Another person, who needs to be free of their past – but also knows she needs to face it head-on – is Vanessa Ives (Eva Green), who now knows the name of the beast after her: Dracula! She goes to her old friend Ferdinand Lyle (Simon Russell Beale) to get help but finds him packing up all his belongings as he’s going to Egypt. He’s going to study old tombs, but really, he has heard they’re more accepting of Mr. Lyle’s preferences in Cairo, so he expects he will stay there indefinitely. Vanessa Ives is very understanding of her dear friend’s plans but will miss him greatly and they have a very sweet parting scene. Before she goes, she asks if maybe he can refer her to someone, who works in the same field as him – understanding and interpreting old artifacts from all over the world – and he gives her a name of someone, he believes would be a great match for his dear Vanessa Ives.

Next, we see Miss Ives at a fencing match, where one of the fencers are clearly more elegant – and fierce – in their style. That’s the person, who wins the match and then turns out to be a woman. The woman, whose name Ferdinand Lyle just gave Vanessa Ives of course. Miss Ives goes to the dressing room, where she meets Catriona Hartdegen (Perdita Weeks). The two women immediately hit it off and the chemistry between them is intense from the beginning. Catriona Hartdegen clearly tries to shock Vanessa, who doesn’t really get shocked by much of anything. Vanessa says she was referred to her by a mutual friend, Mr. Lyle, and then asks if she also works in the same field. Turns out, she works in thanatology, which is the scientific study of death. Perfect! 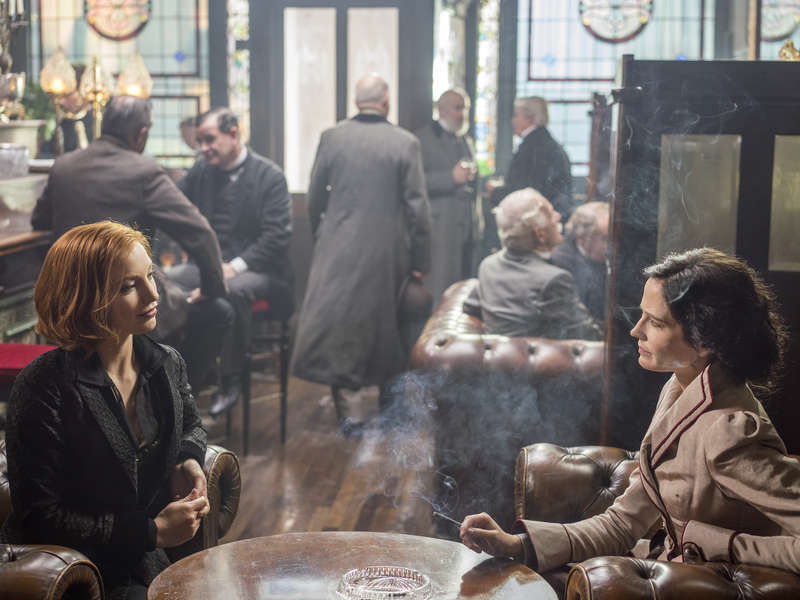 The two women head out for tea – and some cognac, of course – while Vanessa Ives speaks honestly about her predicament and why she needs the help of Miss Hartdegen. Vanessa’s new friend is up for the challenge and they plan to work together to fight Dracula – even though Catriona first tries to suggest Vanessa should run, which we all know isn’t an option for our dear Miss Ives. Vanessa also admits she doesn’t have many friends, since they’re all either dead or gone, but still thinks of someone, when Catriona asks. I thought for sure she was heading over to see Dr. Sweet (aka Dracula’s cover identity), but hoped she would go to her true friend, who is of course Dr. Seward (Patti LuPone). They talk and relax in each other’s company, where Dr. Seward now reveals that she was beaten by her late husband. One night, when her husband seemed ready to kill her, she got to him first and killed him with a meat cleaver. Gotta love the women on this show. They may be beaten, but they never give up! 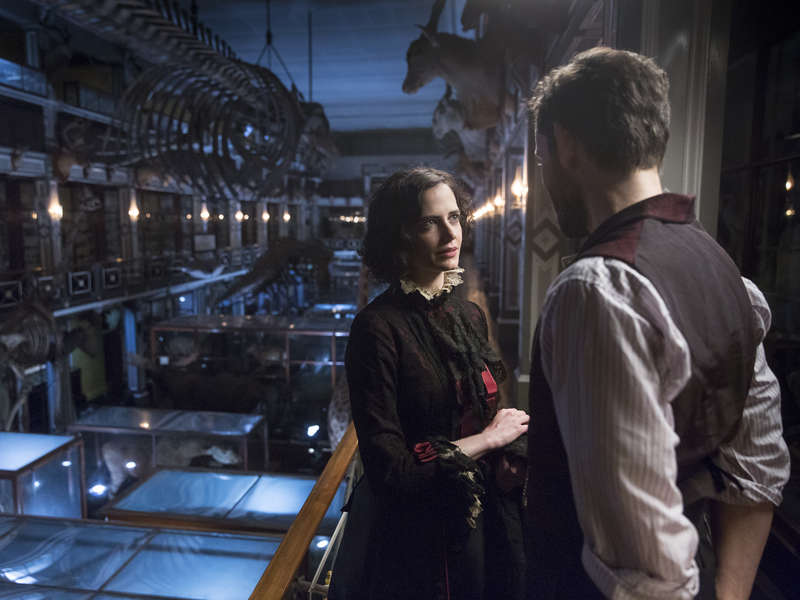 This time around, it’s Dr. Seward who suggests Vanessa should go see Dr. Sweet, and this time she can no longer resist, so she goes to the museum ten minutes before closing time. There she finds Dr. Alexander Sweet (Christian Camargo) and when Vanessa confides in him regarding vampires and Dracula – because she wants him to know everything if they’re to have a chance – he doesn’t seem phased. Instead, he shows her a bat, who also lives off of blood and is very scientific about the whole thing. This is such a relief to Vanessa that she cannot resist him any longer, and they make passionate love right there on the floor. You can’t help but feel happy for Vanessa Ives being happy, but we also know it’s very short-lived because we all know this man is Dracula. 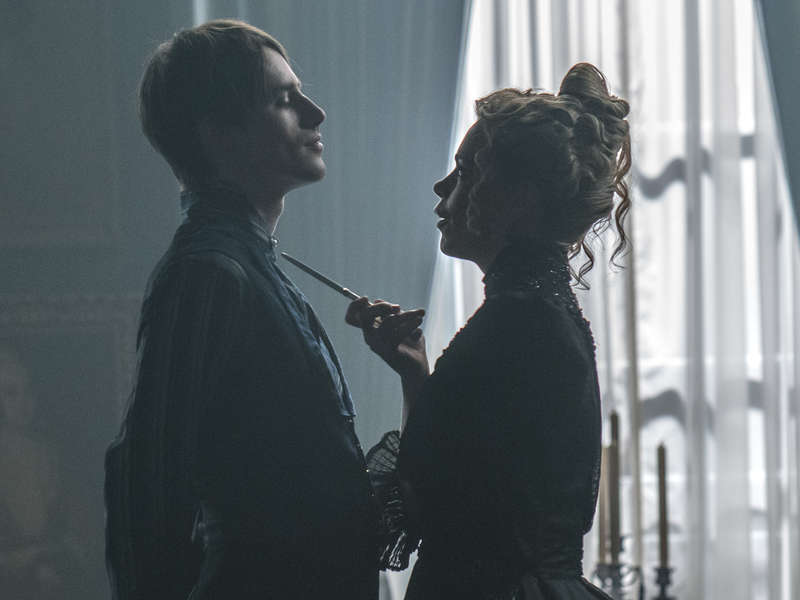 Yet another person dealing with her past is Lily (Billie Piper), who is creating her army of whores to avenge all the wrong that has been done to them and other women of this world. Using Dorian Gray (Reeve Carney) as an example, she shows the girls how to kill men. Up next to show that the lesson worked, is Justine (Jessica Barden), who seems to take things a bit too far and even manages to draw blood from Dorian. He warns her, but she makes it pretty damn clear that she won’t listen to any man and only trusts Lily. 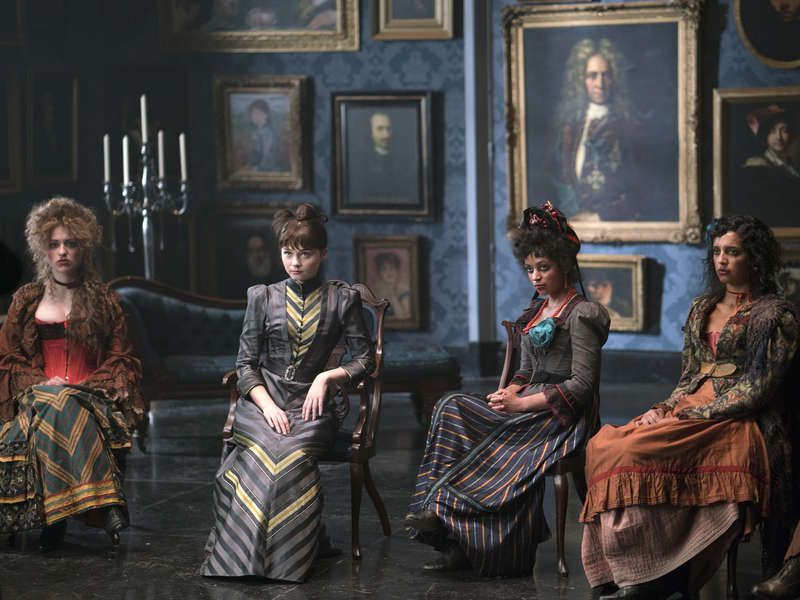 Later that same night, they’re having a little party and Lily is dancing with Justine when Dorian asks to cut in. The ladies refuse to let him and ask him to wait. Afterward, Dorian talks to Lily about this, since he feels he and Lily are supposed to be equals in this and the leaders together, but Lily admits she’s torn as her soul belongs to Justine, since she feels Justine has the same soul as Brona. She remembers every man, whoever hurt her when she lived the life of Brona, and feels the need for vengeance.

While they’re talking, there’s some commotion and Justine drags in Victor Frankenstein (Harry Threadaway), who is there to kidnap Lily and take her back to Dr. Jekyll’s lab and “make her good” with their new magic potion – which is to be inserted via a needle through the eye. Lily laughs at Victor for his very weak attempt at kidnapping, and warns him yet again, to stay away. Justine asks to please be allowed to kill him, and Dorian is appalled while Lily seems to think it over. Finally, Lily tells Justine to leave him be but also tells Victor that if he comes back again, she’ll kill him herself. 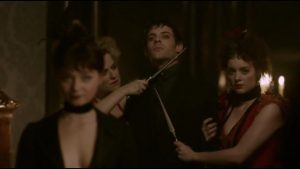 While Dorian lets Victor out, it’s clear that these two men are now understanding each other better, as they both feel they’re losing Lily – or more accurately, their power over her! Victor suggests that Dorian could help him help Lily, and you can tell he’s thinking about this. In fact, that’s the moment you know he will fail Lily for the same reason every other man has failed her; The second they no longer feel they can control her, they want to force her into submission by any means necessary. And yes, I’ll say it: I hope she’ll have a delightful and brutal revenge on them both! 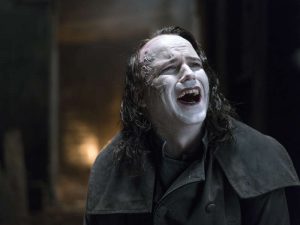 The last thing I should mention from this episode was The Creature (Rory Kinnear), who has been watching over his wife and son. The son is very sick and the Creature couldn’t help but leaves his passive place looking through the ceiling and went to give the boy water and comfort, while his mom was away at work. With shut eyes, the son recognizes his father’s voice and is happy, so The Creature swears to do whatever it takes to get the medicine and care his son needs. However, when the son then opens his eyes, he is terrified of what he sees and The Creature runs out and cries in the alley. Poor loving creature!

We’ll be back next time with a recap for Penny Dreadful episode 7, which you can watch the promo for right here: