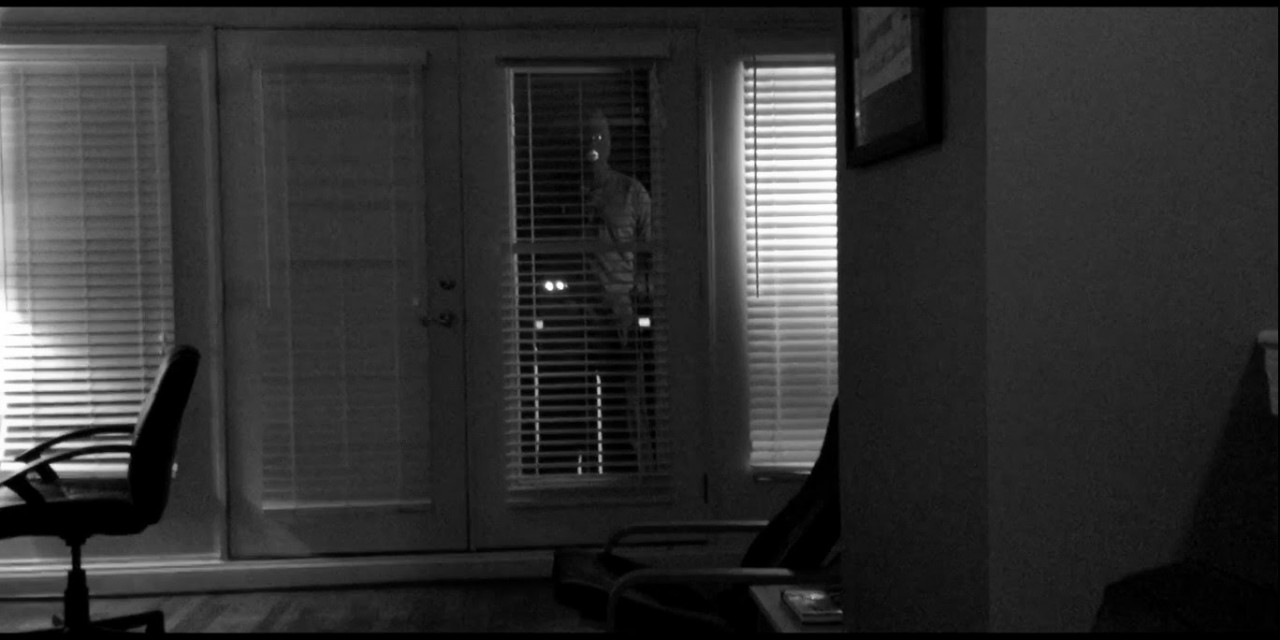 The Break-In is a truly low-budget horror movie that surprised us in many ways and offered a sharp twist at the end!

With the tagline “More than 2,000,000 Americans are victims of home burglary each year. How safe is your neighborhood?” you know The Break–In is going to be one of those movies that’ll make you feel uncomfortable in your own home. Both while you watch it, and especially afterward!

For the record, if you watch the trailer at the bottom of this review – and you should, once you’ve read it – then please try to ignore the fact that they’ve used a very familiar horror sound during the trailer. This could give you an indication that The Break-In isn’t a very original movie, when in fact it’s very original.

And while we’re at it, let’s get the one main issues we had with the movie out of the way; This is a found footage film, which is absolutely fine with us. Unlike certain other reviewers, we don’t automatically dislike or hate something based on the way the story is told. It is after all, all about the story. Still, it isn’t believable that anyone would film quite as intensely as Jeff (Justin Doescher) does in this plot. We get the initial explanation of him having just switched from a flip-phone to a smartphone, and he’s loving this new phone so much that he’s filming everything.

Also, I will gladly give credit to the fact that they do a good job of solidifying this “filming everything”-style in two ways; Firstly, they’re expecting their first child and want to document this as well as make a video for the future child. Secondly, when the break-ins in the neighborhood begin, a police officer tells Jeff that it’s great he’s recording so much. After all, you never know what you might catch while filming something else.

So, points for that… even though I still found myself thinking some moments of filming were too far-fetched – like filming while running. Then again, I do know people who could react the same way as Jeff in the movie, so it’s no dealbreaker for me. Though they would use a GoPro and not a handheld smartphone. Also, we do have a few scenes, where Jeff talks while filming and it feels a bit too forced; It’s like he’s narrating for us and not just talking to himself or anyone else in the room with him. It’s no biggie, but I’m sure others will notice, so might as well mention it.

This is about as low-budget as you can get, which means there are a few sound issues (something we also encountered in They Look Like People, which we loved) and this means the story has to be interesting and the acting has to be on point. And I’m very glad to report that they win big on both these counts! I mean, we’ve seen plenty of movies where the story is very lacking and the acting is awful – and the horror genre delivers far too many of them.

Great acting wins us over

The acting in The Break-In is absolutely top-notch, which makes it believable all the way through. For Maggie Binkley (Melissa) and Ted Fernandez (Detective Garcia) this is their film debut, while Melissa Merry (Lisa) has done lots of short films. And J.P. Veizaga (Steve – credited as Juan-Pablo Veizaga) has had small roles in lots of really great TV shows like Person of Interest, House of Cards and Sleepy Hollow.

Justin Doescher is the director and writer of The Break-In but also stars in the movie. Fortunately, he does a good job in that department as well. He has quite a lot of acting experience, but mostly he has been playing a bodyguard, security guard or police officer – probably due to his 6’5 frame, which makes him ideal for these roles.

One last thing, regarding the acting in particular; There are movies where you can just play the trailer, close your eyes and when you listen to the actors delivering their lines, you cringe. Those are the kind of movies we tend to steer clear of because I have no interest in watching a movie just to talk shit about it. Especially when it’s a low-budget project that people make out of a passion for film and storytelling. I’d rather encourage people to watch a great movie than help them avoid a bad one, which they might like anyway (I’m paraphrasing one of my own favorite movie critics, Tasha Robinson, here). And yes, you can find reviews of The Break-In where they claim the acting is awful, but let me tell you, I’ve seen awful and this is very far from it.

This is one of the better truly low-budget horror movies out there and it’s only around 70 minutes long, so it’s worth a shot to help out those trying to bring something new to the horror genre.

The Break-In is out on VOD now!

Jeff Anderson and Melissa Joseph are engaged, have a baby on the way, and live in a townhouse next to their best friends, Steve and Lisa. They have been living the perfect life, until a string of robberies take place in their neighborhood. Each night Jeff and Melissa notice strange occurrences happening to and around their home, and they fear that they’ll be next on the list.