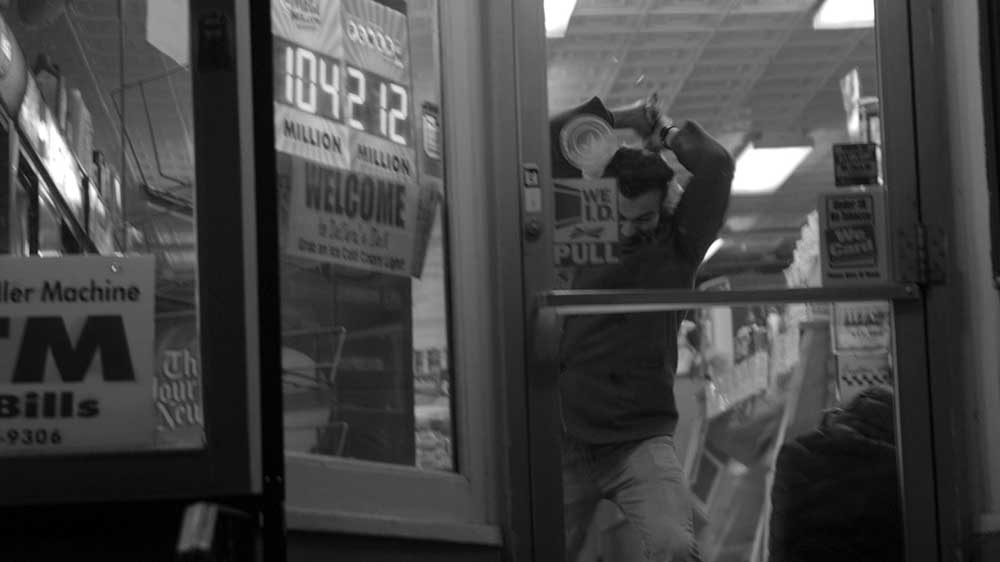 Strawberry Flavored Plastic is the kind of low-budget horror movie that stays with you for a while. This amazing found-footage genre-bender is an impressive feature film debut from Colin Bemis.

Since this is shot as a mockumentary, all the initial names are those of the characters making the “documentary”. During the final credits, the character names from the beginning transition into the real names. This goes for both the director and actors. Gotta love that kind of dedication to your project. We’re talking Blair Witch Project levels of meta here!

And yes, this is found footage, but one of the few where all the footage can be explained. Every time we wondered out loud “Wait, who’s filming now?” the answer would follow shortly.

Also, finally a found footage where not every shot is framed perfectly. Since both GoPro, Skype and regular cameras are used for filming, the framing goes from perfect in interview sessions to shots of feet or the back of a car seat during “off the record” conversations.

Watch the trailer for Strawberry Flavored Plastic right here or continue reading our review below.

Aidan Bristow – a star is born!

From the first shot featuring Aidan Bristow as the character Noel Rose, we were hooked! “Noel Rose” is the subject of the documentary (which is obviously a mockumentary) in Strawberry Flavored Plastic. He’s a serial killer and even though he wasn’t entirely honest, to begin with, he does come clean with the directors quite quickly.

The documentary directors in this movie, Errol and Ellis, are portrayed by Nicholas Urda and Andres Montejo respectively. They both do great jobs, but Aidan Bristow is the runaway star of Strawberry Flavored Plastic.  Not only is his character absolutely fascinating, Aidan Bristow delivers every scene and every single line with such perfection.

Honestly, the villain is often the one with the most interesting and juicy stuff, but the character of Noel Rose would not have worked with just any actor. It could so easily have come across as a weird wannabe tough guy, but Bristow takes it to a much darker place.

Maybe you’ve already seen him in L.A. Macabre (watch for free with Amazon Prime). Personally, I first remember seeing him in the wonderful Eat with Me, where he is most definitely a charmer as well. Still, it was a true eye-opener to see him in this movie to really appreciate his diverse talent!

I could easily have watched an entire movie of just getting to know even more about the Noel Rose character. And I honestly cannot wait to see Aidan Bristow in a new project. He is a star on the rise, so make sure you get to know him now! 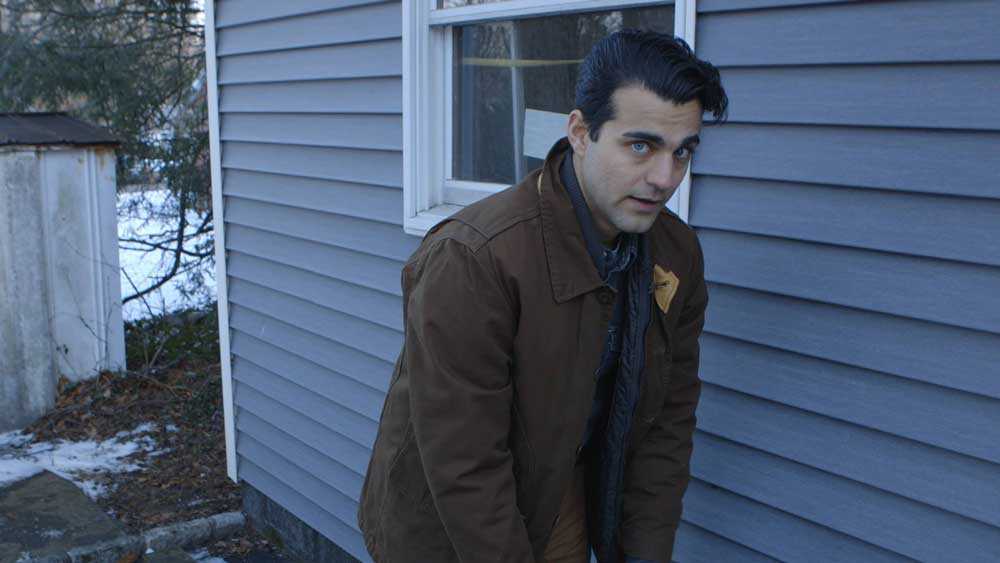 We’ve already met a charming serial killer in Creep and more recently even a documentary style in Creep 2. However, where Mark Duplass’ serial killer in the Creep movies is a bit off, Noel Rose is something entirely else.

He is actually charming and capable of separating the two entirely; Part good guy, part serial killer. “Compartmentalizing” is key. Something Noel Rose explains very eloquently in a way that you can’t help but think “Yeah, makes sense!”.

He reminded me a lot more of Blackburn. A character by author Bradley Denton, who is featured in both a short story and in his own book titled (you guessed it!) “Blackburn”. If you like this movie, you should love that book. And if you’ve read Bradley Denton’s “Blackburn” then this is definitely a movie for you.

For the record, it’s not at all that Noel Rose is a copy of Blackburn. This movie just shares a lot of the qualities, I loved in that book. In fact, it would be absolutely brilliant if a movie adaptation of Blackburn was made by the writer/director of this movie, Colin Bemis.

Talk about a match made in horror heaven! I honestly didn’t feel that the book could be adapted well, but I now stand corrected.

Strawberry Flavored Plastic was written, directed and produced by Colin Bemis. This is his first feature film project after having made two short films in the past. And this is truly a perfect example of how much you can accomplish on a very low budget.

If you focus on a great story, fascinating characters, and a very solid cast, then you can do so much. In Strawberry Flavored Plastic the scenes are often shot inside and staged as interviews. After all, this is shot as a documentary about a serial killer, so many scenes feature him being interviewed. And it’s awesome!

The weaker scenes for me, were scenes featuring the directors talking about how to go further with the documentary. These scenes weren’t bad, but they ran too long for my taste. Also, especially one of them had some sound issues. Again, this is the one issue you almost always fight in low-budget; Sound issues.

I don’t know what Colin Bemis has in store next, but I really hope we won’t have to wait too long. He is already an accomplished and impressive filmmaker having made this one. But we’re ready for more. And we definitely wouldn’t mind a prequel about “Noel”. Just sayin’.

For now, he just needs to get Strawberry Flavored Plastic out there, and we certainly recommend it to everyone! 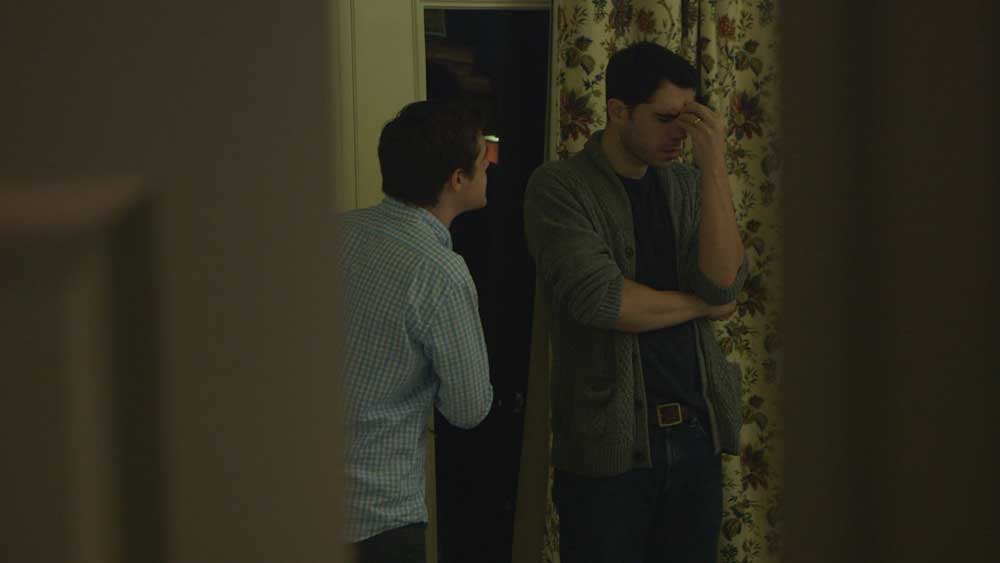 When Errol and Ellis, two aspiring documentarians embarking on their first feature, put out a feeler to their local community for individuals with interesting stories, they hear back from and settle on the tale of Noel, a man who has just been released from prison after a nine year incarceration for a crime of passion. After several weeks of shooting have passed, they inadvertently discover through late due diligence that Noel’s story is fabricated: he has never been to prison. They soon find out that he is an at-large and very active serial killer who has never been apprehended by authorities. Now too entangled and implicit in Noel’s horrific on-goings, the duo are stuck sternly between deciding on the right thing to do and possibly making the most sensationalized and infamous documentary ever made. They make their decision: to keep filming, and events spin increasingly and wildly out of control.