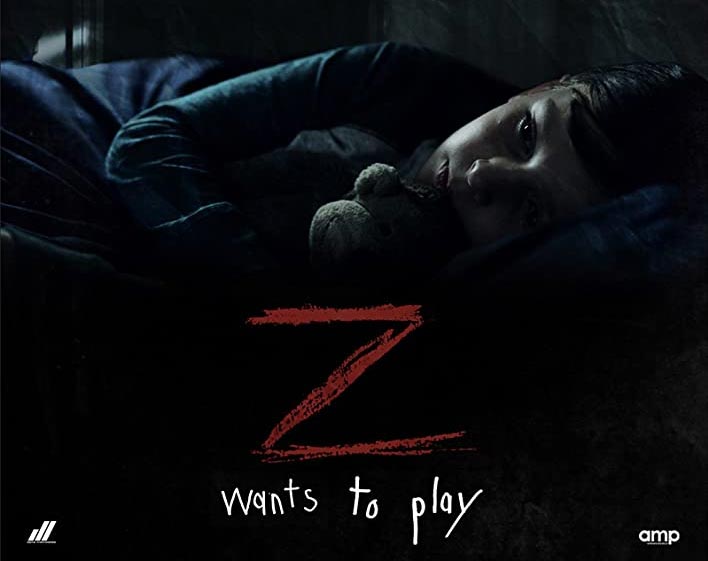 Z is a new horror movie on Shudder. And no, it’s not about zombies, which is probably what most would expect from that title. Read our full Z movie review here and check it out on Shudder if you’re curious!

Z is a new horror movie on Shudder. Spoiler alert: Z is not about zombies.

Seriously. With movies and shows like World War Z and Z Nation, I would not have blamed you if you had thought it was.

Because maybe it should have been. Read why in our full Z movie review below.

Josh is a loner of an elementary school student. He does not pay attention in class. He eats lunch by himself. And he does not appear to have any friends. So, it makes sense when he asks his parents to set a place at dinner for his new imaginary friend Z.

With the assurance of their family psychologist, Josh’s behavior is seemingly normal.

However, as Josh’s passive demeanor is rapidly consumed by aggression and suspicion, Beth and Kevin soon realize that Z might not represent the typical defense mechanism of a lonely boy… or even the typical child-spawned imaginary friend.

The whole is far lesser than the sum of its parts

Directed by Brandon Christensen (Still/Born) and co-written by Christensen and Colin Minihan (director of Grave Encounters), the cinematic pedigree of the cast and crew of Z set a strong foundation for what could have been a real contribution to the horror genre.

And act 1 of Z was quite exceptional.

Klyne’s Josh was reminiscent of Let the Right One In’s Oskar and Daniel Isn’t Real’s Luke. The change in his behavior fostered that child-induced parental fear that engaged the viewers of Nicholas McCarthy’s The Prodigy and Joseph Ruben’s The Good Son.

I sincerely anticipated a 4-star movie after the first third of the film.

The ending of the Z horror movie

Unfortunately, once Z tried to find its own footing in Acts 2 and 3, its lure receded, only to transiently reemerge when the “heredity”. Transference of imaginary friends brought to mind elements of Hereditary and Daniel Isn’t Real and its one decent jump scare was analogous to the jump scare in Insidious (you know the one to which I’m referring).

Despite these faults, Tracy did not an exceptional job in her role as a mother. One whose terror of her son cleverly reverts to one directed inward toward her past.

However, with an eeriness that was not terribly eerie, a creepy kid (Klyne’s Josh) we pitied instead of feared and jump scares that were overwhelmingly telegraphed, Z left much to be desired with respect to the horror genre.

Roger Ebert’s introductory sentence to his Z review mentioned both Poltergeist and The Babadook, two movies that were far superior to this one. Truthfully, there are much better movies on Shudder, but there are also much worse ones, so don’t hesitate to put Z on in the background.

And, while I recognize that some could make the argument for a 3-star rating, Z deserves 2 of them. Sadly underwhelming, Tracy’s performance could not revive a weak screenplay.

Maybe I should have watched “The Lodge” (now on Hulu!).

Z premiered exclusively on Shudder on May 7, 2020.

A family find themselves terrorized by their eight-year-old son’s imaginary friend.