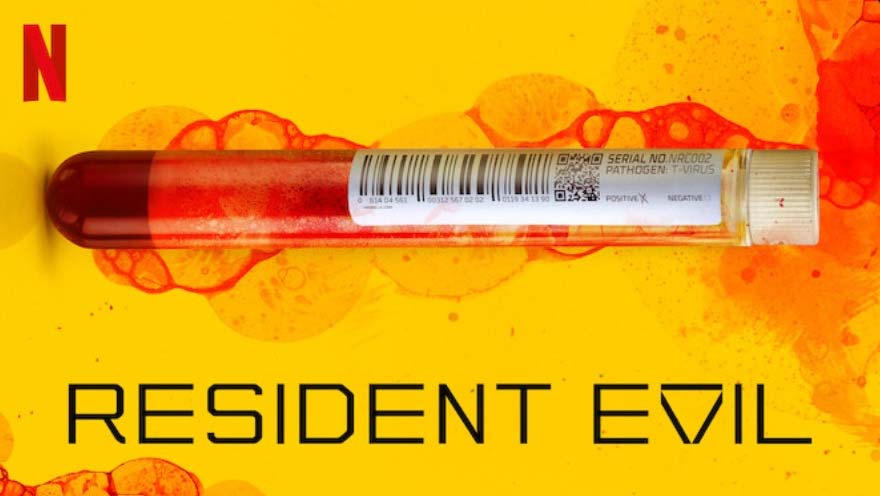 The RESIDENT EVIL series on Netflix is a new story in the franchise. This time, the story takes place in 2036 but we get plenty of flashbacks to 2022. That’s when the latest outbreak happened. Read our full Resident Evil Season 1 review here!

The new RESIDENT EVIL series on Netflix is something I’ve been looking forward to. Yes, despite it not having any Milla Jovovich in it, which is never really a good thing. But hey, the new Resident Evil movie did actually manage to do a really good job of paying homage to the videogame. Dark and sinister in all the right ways!

Also, I really wanted to like it. This new series that is. However, already before episode 1 was over, I was a lot less impressed than I expected. I just cannot stand when characters continuously have to make stupid choices or do dumb things. They’re familiar with the world, they live in. And the dangers. Still, they seem to almost forget.

Continue reading our Resident Evil Season 1 review below. The series is out on Netflix from July 14, 2022.

The plot of the Resident Evil series on Netflix offers up a new story in the franchise, so we’re meeting a lot of new characters. The sinister and greedy Umbrella Corporation is still very much there, but other than that, it’s all very new. Including New Racoon City where all the Umbrella Corporation employees live.

The main story plays out in 2036, which is a world where humans are the absolute minority. Instead, the world is overrun by blood-thirsty creatures that used to be human. Before they were infected with the “latest and greatest” drug-turned-virus from the Umbrella Corporation.

Okay, it isn’t quite that simple, so to understand how we got to this point, we see many flashbacks to 2022. That’s when the outbreak happened.

The main character, we follow here in the Resident Evil series, is Jade Wesker. Her father worked for the Umbrella Corporation and her sister, Billie, also played a big role in the 2022 outbreak. Actually, all three did in their own way. 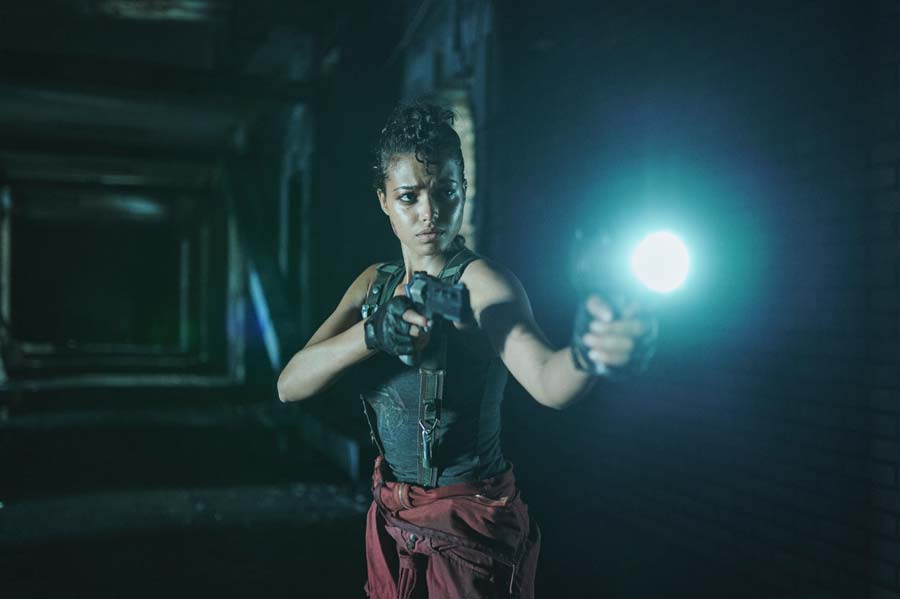 The star of the Resident Evil series

As already mentioned, Jade Wesker is the main character of the Resident Evil series. She’s portrayed by Ella Balinska, who we already know can do action and fight sequences from her role in Charlie’s Angels (2019). Unfortunately, we don’t get to see nearly enough of her fighting skills, since Jade is written to make dumb choices again and again.

Also, I have a real issue with Jade being someone who has lived 14 years in a post-apocalyptic world. However, she still managed to get a family (husband and child). All while staying out “in the field” for months at a time to study the creatures, yet still not being smart enough to stay safe. Plus Ella Balinska, who plays Jade, was born in 1996.

Anyway, in the 2022 version, the young Jade is portrayed by Tamara Smart (A Babysitter’s Guide to Monster Hunting). She was born in 2005, so there’s just a nine-year age gap despite a 14-year time jump. Just a minor detail, sure. But Ella Balinska also looks really young (because she is) and they don’t even really utilize her skills.

She could be the kick-ass character that Milla Jovovich was – along with several other female actors in the Resident Evil film franchise. It’s just a shame really! 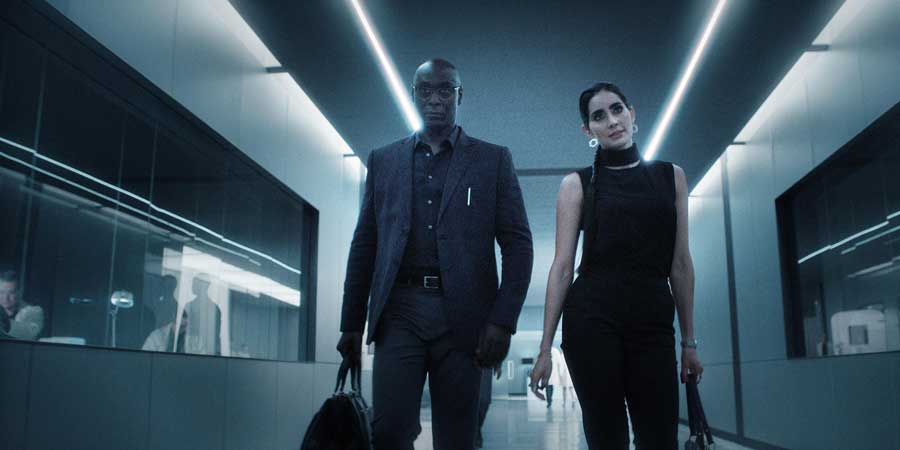 Another key character in the Resident Evil series is Billie Wesker, who is portrayed by Siena Agudong (No Good Nick). Billie is the sister of Jade and the two have a very tight relationship. Despite being very different. Having a father who is virtually never around, has meant they’ve relied mainly on each other.

I won’t go into the character of Billie too much, since she’s a big part of what happens in 2022. And also during the events of 2036 – just in a different way!

Their father, Albert Wesker, is a name recognized by fans of the Resident Evil universe. But not exactly in this form. Albert Wesker is portrayed by Lance Reddick (the John Wick franchise, Godzilla vs. Kong), who does a great job. Especially when working across from Paola Nuñez. I’ll get to her next!

As the new CEO of Umbrella, we get Evelyn Marcus, who is probably my favorite new character in the Resident Evil series. Evelyn Marcus has all the attitude and hunger for success that makes her intriguing to watch. Also, she is exactly as ruthless as you’d expect since she has plenty to prove after taking over from her father, who founded the company.

Paola Nuñez (The Purge series, Calls) plays the role of Umbrella Corporation CEO, Evelyn Marcus, absolutely perfectly. This is the cutthroat attitude served with a crooked smile that I expect and want from Resident Evil. Both from its heroes and villains! And Paola Nuñez really delivers on that.

Andrew Dabb is the showrunner and executive producer of this new Resident Evil Netflix series. He previously worked on Supernatural which maybe isn’t that much of a surprise, when you watch this new series.

Mary Leah Sutton is also a writer and executive producer on the series. She worked on The Following previously (among several other solid series). I really wish this Netflix series had some of the sinister darkness and attitude of that series.

I was looking forward to this Resident Evil series on Netflix because I expected lots of attitude and a “no holds barred”-style. Instead, this Netflix production feels a whole lot more like a network production with all sorts of restrictions and regulations.

Sure, the monsters and creatures are great and the production quality is absolutely stellar. But the characters are often tame and/or very one-dimensional. Whether in the 2022 timeline with teenagers or the 2036 timeline with adults, the same stupid choices are made. It gets tiring real fast.

A bit like Jurassic World: Dominion in that sense. Yeah, ouch, I know! Still, any fan of Resident Evil should definitely check this new series out. I think (and hope) it will get better, so let’s hope it gets to prove it with more seasons!

Year 2036 – 14 years after Joy caused so much pain, Jade Wesker fights for survival in a world overrun by the blood-thirsty infected and mind-shattering creatures. In this absolute carnage, Jade is haunted by her past in New Raccoon City, by her father’s chilling connections to the sinister Umbrella Corporation but mostly by what happened to her sister, Billie. 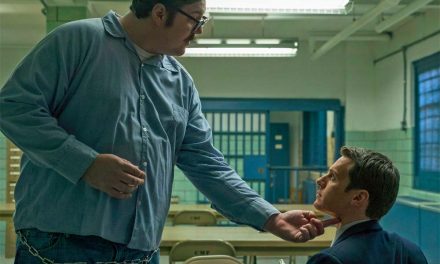 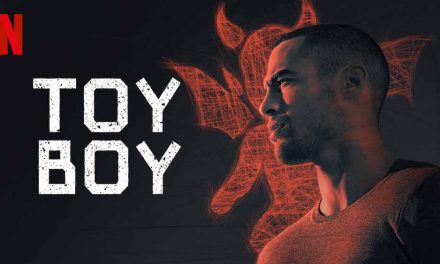 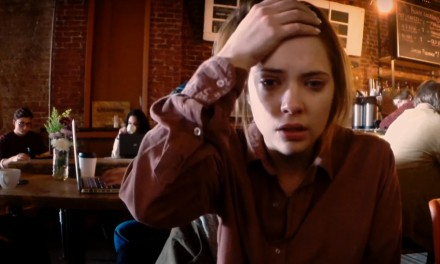 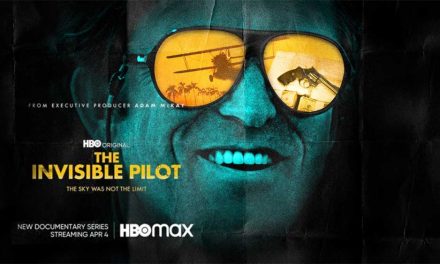