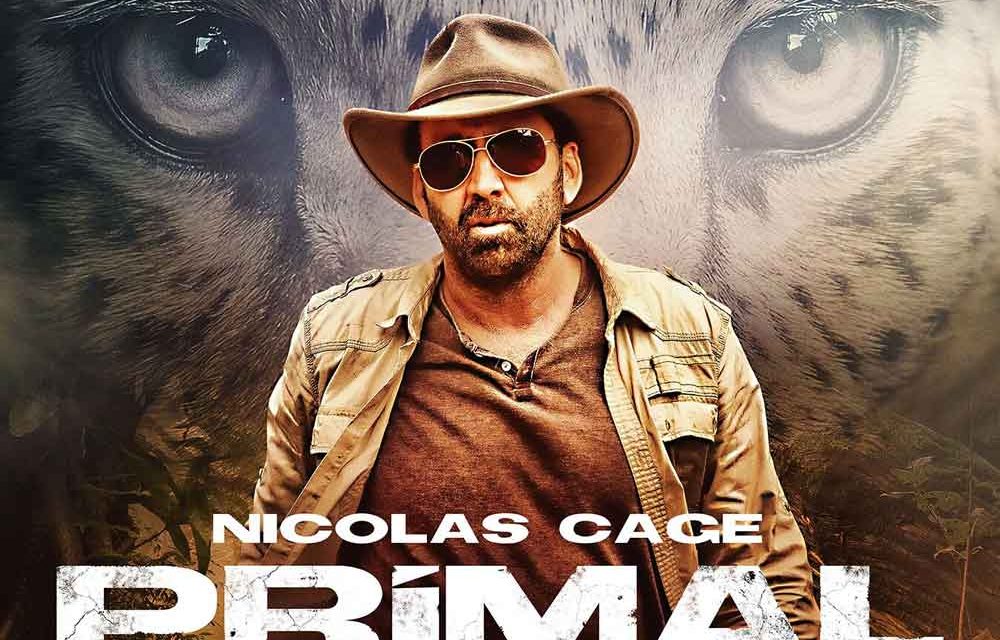 PRIMAL is a new Nicolas Cage action thriller, and while I never expect much from those, this was a new low. The plot feels like a TV movie from the 1990s and the characters are just silly. Also, a lot of animals are hurt and killed throughout the movie. Read our full Primal review here!

Primal is a new Nicolas Cage action thriller. Personally, I love Nicolas Cage when he’s over-the-top crazy and not a “I know I’m a real heartbreaker”-type. This movie features the latter type!

Still, you never really know what you get with a Nicolas Cage movie. However, I’ve come to learn that the more budget and stunts they have, the dumber the plot seems to be. Primal is directed by a rather brilliant stunt coordinator. Need I say more about what to expect from the plot?

With Primal we get Nicolas Cage playing a character that comes across as a poor man’s Jack Colton from Romancing the Stone. A role made iconic by Michael Douglas. However, Frank Walsh (Nicolas Cage) is nothing like Jack Colton. Especially not when it comes to being charming.

Also, Colton “only” trapped exotic birds in Columbia to sell back in the US, so he could buy a boat. Frank Walsh is trapping every animal in sight. Monkeys, birds and the real money maker: A white jaguar! Which he manages to catch in a downright silly way.

When Frank Walsh needs to get these animals back to the US to sell, he buys transport on a boat that ends up holding an assassin. Of course, they have several “fascinating” scenes featuring two Alpha males who both consider themselves appex predators.

Actually, Kevin Durand (Tragedy Girls) is pretty awesome as Richard Loffler, the assassin. He is playing exactly the kind of wacky weird character that Nicolas Cage portrays in other movies – examples range from Face/Off to the more recent Mandy. Also, Kevin Durand seems to be the only person playing this character in an over-the-top way to create a campy vibe. Really, that’s the only way to work with a plot this silly.

Also, the awesome Famke Janssen (Jean Grey in the first X-Men trilogy) is in Primal but I have no idea why. I just hope the paycheck was impressive because I cannot see any other reason she would take this job. Though honestly, it’s probably just that she knows the director from working with him when he was a stunt coordinator.

So many animals killed

Look, I realize that animals are not actually killed when they die in movies. And I recognize that it can have an immense impact and work brilliantly as plot-drivers. I mean, the John Wick franchise is basically built on this (I’m over-simplyfying here, of course). The same goes for I Am Legend starring Will Smith and the wonderful German Shepherd he shares most scenes with.

In Primal, the animals are killed for different reasons. Mostly because Nicolas Cage’s character Frank Marshall just views them as money in the bank. Though, of course, you already know exactly what kind of character arc he’ll be following.

In almost every single way, the plot of Primal feels like a TV movie from the 1990s with very one-dimensional characters. The fact that animals are being killed is just adding insult to injury! Check out my author profile at the bottom of this page to understand exactly what I’m referring to.

Primal is out now

Look, I love a good action-thriller as much as the next person. Hell, I grew up watching them in the late 1980s and early 1990s. We’re talking the Arnold Schwarzenegger, Sylvester Stallone, Jean Claude van Damme and Steven Segal movies that often had a rather simple plot.

Still, they provided some sort of fun entertainment – albeit very stereotypical and predictable. Primal does not!

Or rather, it gives you the stereotypical and predictable plot without including the crazy fun!

The director of Primal is Nick Powell (aka Nicolas Powell) and he is a truly awesome stunt coordinator. He has worked on movies such as X-Men: The Last Stand and the James Bond movie Goldeneye. Both huge movies for Famke Janssen which (sort of) explains why she’s part of this movie.

Richard Leder wrote the script and he does have quite a bit on his resume. Though I was hardly surprised to learn that most of it was TV movies. To me, Primal does feel like a TV movie but instead of being a campy fun viewing experience, it’s just bad.

PRIMAL will be out in theaters and on demand on November 8, 2019.

When Frank Walsh (Nicolas Cage), a hunter and collector of rare and exotic animals, bags a priceless white jaguar for a zoo, he figures it’ll be smooth sailing to a big payday. But the ship bearing Frank’s precious cargo has two predators caged in its hold: the cat, and a political assassin being extradited to the U.S. After the assassin breaks free – and then frees the jaguar – Frank feverishly stalks the ship’s cramped corridors in hot pursuit of his prey, right up until the thrilling, unpredictable climax.