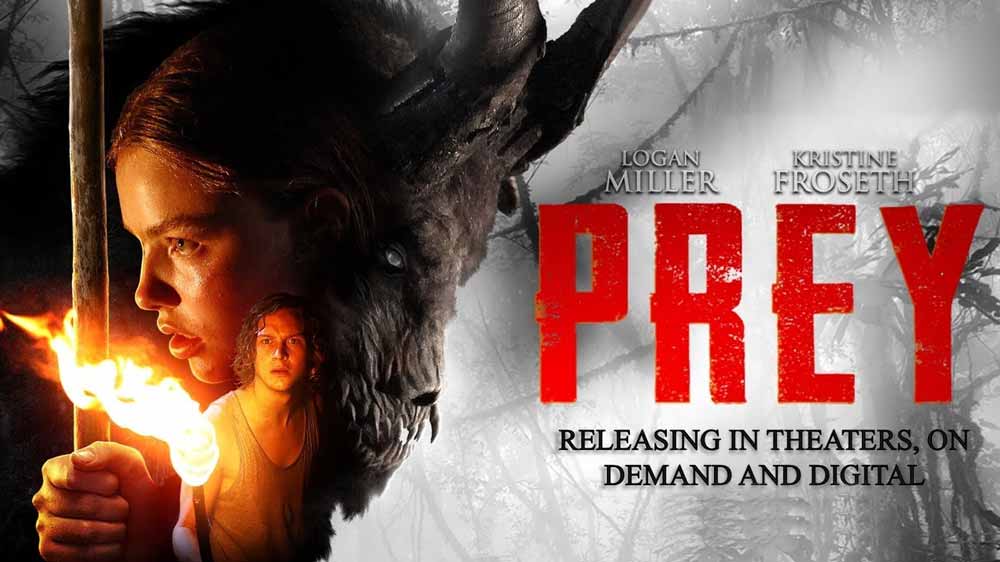 PREY is a new horror movie from Blumhouse. The story uses mystery and adventure as plot drivers. Plus, it does also have a monster of sorts. All of it works pretty well as a Cast Away in a horror setting. Yet, it does feel longer than it is. Read more in our full Prey review here!

Prey is a new horror movie from Blumhouse. The plot features a young man on a “deserted island” retreat as part of a sorrow management program. Unfortunately, the island he’s left on isn’t quite deserted.

The plot gives you a Cast Away vibe at first, but all this changes pretty quickly. If you don’t like the two stars of Prey, it probably won’t do much for you. I do like them both, so I was on-board with this from the get-go.

Still, I couldn’t help but feel that the movie was too long despite having a runtime of just 85 minutes. We’ll get into what works and what doesn’t in our full Prey review below!

Logan Miller is a volunteer cast-away

The star of Prey is Logan Miller and I do like him. He won me over 100% with Scouts Guide to the Zombie Apocalypse – read our review of the all too underrated horror-comedy here >

Since then Logan Miller was in The Good Neighbor and been on The Walking Dead. More recently, he co-starred in Escape Room which was a pretty damn cool movie that certainly surprised me in many good ways. In Prey, Logan Miller plays Toby, who is struggling with getting over the loss of his father.

He spends quite a few scenes on his own in Prey, but then Madeleine comes along. Apparently, she’s been living on this supposed desert island for quite some time. She’s not alone since she lives there with her mother, but we don’t meet her for quite some time. Madeleine is played by the wonderful Kristine Froseth who’s also in the Netflix series The Society.

Before the Netflix series, Kristine Froseth was in the Netflix horror thriller Apostle (read our Apostle review here) and you will no doubt be seeing a lot more from her soon. In Prey, a lot of the story revolves around just Logan Miller’s Tobey and Kristine Froseth’s Madeleine. This works well for me, but the plot could evolve a bit quicker. 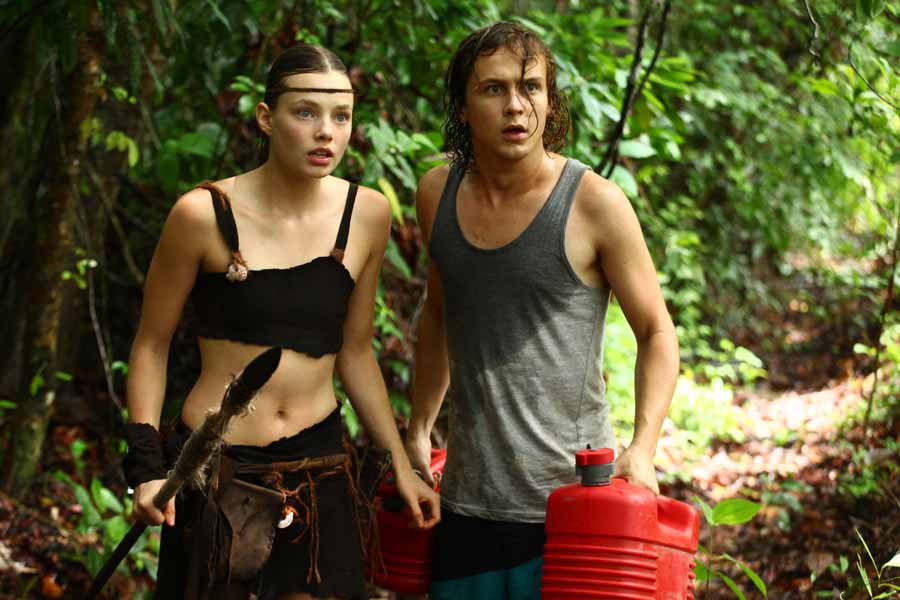 A premise that isn’t believable

My issues with Prey started pretty early on. For one, I can’t imagine someone being left on a deserted island for three days with nothing but a flare gun to signal for help. That’s just a silly concept for me. I mean, one thing was if this was an adult person who signed up to a challenge along the lines of the Naked and Afraid series on Discovery Channel (which I do love!).

However, in Prey, we’re dealing with a someone in their late teens. Also, they clearly haven’t given these kids any guidance [other kids are left on other islands in the same area] since he builds a shelter on the beach. I mean, you can clearly see that this smooth beach is bound to be under water when the tide comes in.

It may be a small thing, but it messes with the entire basic premise. This results in me not buying into the plot. I mean, when I find the idea of some sort of demon monster more believable than the perfectly “normal” parts of the story, then something is off.

Franck Khalfoun directed and co-wrote Prey. The other writer of the Prey screenplay is David Coggeshall, who has worked on the TV series Scream and Lore. Also, David Coggeshall wrote the script for The Haunting in Connecticut 2: Ghosts of Georgia (2013) which was a pretty solid sequel.

Franck Khalfoun made two rather awesome horror movies at the beginning of his career as a director. His feature film debut was P2 from 2007 which was co-written by horror filmmakers Alexandre Aja and Grégory Levasseur. The two made both Haute Tension and the remake of The Hills Have Eyes before working on P2 with Khalfoun.

For me, the remake of Maniac (2012) starring Elijah Wood really made me notice Franck Khalfoun. And yes, that particular script was also written by Aja and Levasseur. In 2017, Franck Khalfoun wrote and directed Amityville: The Awakening which wasn’t as good as his previous movies.

The same goes for Prey as far as I’m concerned, but it does show a lot of potential. It just feels like something is being held back and I’d rather have it go a little more crazy. That’s just a preference though and I can’t help but acknowledge that it is a solid horror mystery.

Toby (Logan Miller), a high school senior struggling with behavioural problems, is placed on an uninhabited island in order to improve his ways. However, despite being told he is in isolation, he soon realizes he is not alone, teaming up with Madeleine (Kristine Froseth), as they are pursued by a deadly entity.