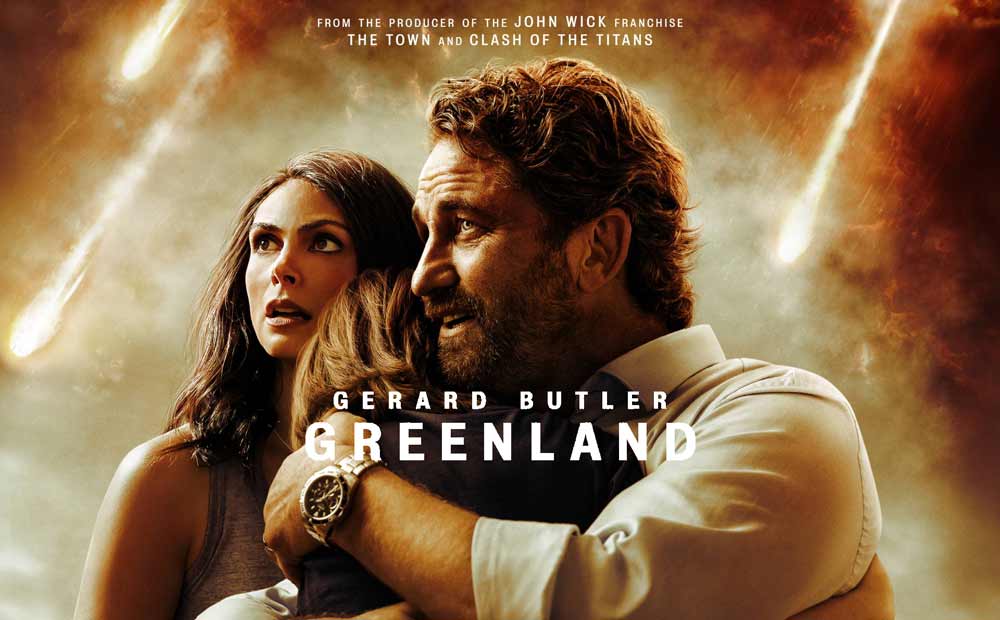 GREENLAND is a new disaster movie of apocalyptic proportions. Gerard Butler stars in the movie with more drama than expected. The action scenes shown in the trailer are only part of this movie. Read our full Greenland movie review here!

GREENLAND is a new disaster movie starring Gerard Butler. Given the fact that people craved movies with virus or pandemic plots, I can imagine a disaster movie is exactly what people want now. After all, we somehow find comfort in seeing people being even worse off than we are in the real world right now.

In this movie, a comet is heading for Earth but is expected to pass us by. After the first “small” fragments touch down on the surface of Earth, it’s apparent that an apocalypse seems imminent.

So that’s why Trump wants to buy Greenland

The comet “Clarke”, which was initially supposed to go around Earth, has changed direction and is heading straight for us. That means disaster and the biggest mass destruction since the dinosaurs went extinct. This comet is from an entirely new solar system so the scientists don’t actually know much about it.

It doesn’t really matter either, since Gerard Butler is the main character and this is where the story lies.

Apparently, a bunker in Greenland is the only place with any reasonable chance of survival. This obviously leads me to believe that this is the actual reason why Trump wants to buy Greenland. He probably heard about the plot and figured it was better to be safe than sorry.

Full disclosure; I am from Denmark and the whole “Trump wants to buy Greenland” is a huge joke here.

The actual concept of the Greenland movie is fine by me. After watching the trailer, I just expected a disaster movie similar to San Andreas but that isn’t really what the movie delivers on. Also, it takes a long time for the huge “reveal” to come regarding the placement of the safe bunker.

I mean, it’s in the title, so while watching the movie, it feels like we’re in on a secret that those poor people want to know.

However, since the comet is supposed to touch down in Western Europe, Greenland doesn’t seem like the best place to seek refuge. I mean, surely there are other bunkers placed further away from Western Europe. Oh well, maybe they changed the “touch down”-destination later on or something.

What Greenland does manage to deliver on, is a very credible portrayal of human nature in the face of danger. Surely we need to start hoarding stuff – and the looting also begins quickly. Basically, when Gerard Butler’s character says “That was fast!”, you actually find yourself thinking that it’s very accurate.

Okay, they didn’t go after toilet paper specifically. Or maybe they did. We don’t really get to see the specifics. Also, people have 48 hours before the comet is expected to impact, so it’s all very rushed… and then again, it’s quite a slow-burner.

You see, Greenland tends to focus more on family drama and big emotions. From the second we’re made aware that the Gerard Butler character is getting back together with his estranged wife, we know that this is where the storyline will be. When we then find out that their 7-year-old son is diabetic, we know this will be a big hurdle.

A summary could be; Sure, Earth will be destroyed in 48 hours, but the real focus is on getting insulin for their son.

Family drama during the apocalypse

Obviously, this is important, but it is a strange way to prioritize. Also, at one point, the family really need to hurry in order to have any hopes of making it to Greenland. The next scene features the kid getting a shower. I mean, obviously, you can’t meet your maker with greasy hair.

Also, more family drama scenes play out to get your heart to swell. I mean, puh-lease, move your a**!

On the actual plus side, I loved seeing Gerard Butler play more of a real person instead of a “regular guy with superhero skills”. It suits him to have flaws and emotions that aren’t just anger. His wife in the movie is portrayed by Morena Baccarin (Deadpool and the V series).

She’s always a badass but in this movie, she really isn’t given much to work with. Along the way, she even has to speak some gag-worthy lines. I’m sorry Morena Baccarin, you definitely deserve better!

Watch Greenland in a movie theater if possible!

Ric Roman Waugh directed this movie just as he did Angel Has Fallen (2019) which also starred Gerard Butler. Basically, he knows how to do action, and does that part really well. Originally, Neil Blomkamp (District 9) and Chris Evans (Captain America) were attached as director and star respectively. Honestly, I think I would have preferred that movie.

Still, I can’t blame the director or the cast of this movie for the final result. The story itself is where the problem lies. I was surprised to learn that Greenland was written by Chris Sparling who has written lots of awesome horror movies. Chris Sparling wrote Buried (2010), ATM (2012), and The Atticus Institute (2015).

In other words, he’s usually much better than what this movie might lead you to believe.

What does save some of the many issues the Greenland movie has, are the awesome action scenes. However good moments of the actual apocalypse were, I still found myself thinking that Lars von Trier’s Melancholia (2011) did the whole thing better. And despite being Danish, I am not a huge fan of the Danish director, so I did not expect that.

Greenland is simply too long and slow due to the family drama elements. It’s like watching a Home Alone and 2012 hybrid of sorts. Which is just weird! If you want to see human nature during an apocalypse, then Train to Busan showed you how.

Since the effects and the sound are absolutely brilliant, you really should watch this movie in a movie theater if at all possible. If you can watch it in an IMAX or somewhere with Dolby Atmos, then this is the way to go. That way, you’ll literally feel the ground shaking beneath you when disaster strikes. And that is cool!

Greenland is slowly being released worldwide wherever the pandemic allows this.

UPDATE: Watch Greenland in the US

A family fights for survival as a planet-killing comet races to Earth. John Garrity (Gerard Butler), his estranged wife Allison (Morena Baccarin), and young son Nathan make a perilous journey to their only hope for sanctuary. Amid terrifying news accounts of cities around the world being leveled by the comet’s fragments, the Garrity’s experience the best and worst in humanity while they battle the increasing panic and lawlessness surrounding them. As the countdown to global apocalypse approaches zero, their incredible trek culminates in a desperate and last-minute flight to a possible safe haven.