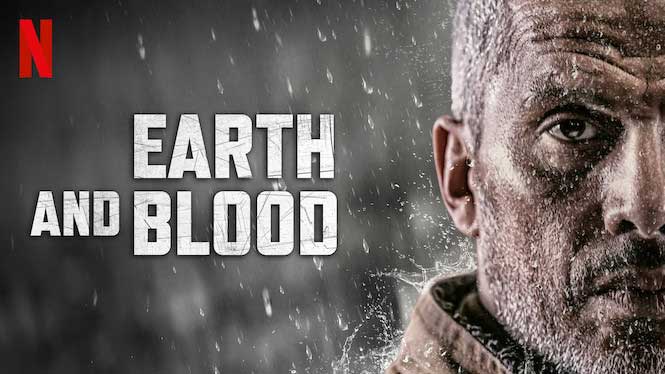 EARTH AND BLOOD is a new Netflix thriller from France (org. title La terre et le sang). It has both drama and action as well as lots of blood. If you’re in the mood for 80 minutes of tropes and stereotypes, then this should do it. Read our full Earth and Blood review here!

Earth and Blood is a new Netflix movie. It’s a thriller that takes place in rural France and yes, this does also mean that it’s in French. However, there isn’t a crazy amount of dialogue in this movie during the final half, so really, don’t worry too much about that.

While this movie features a crisp runtime of just 80 minutes and should be perfect for a quick and wild entertainment ride, it feels longer. The first half is mostly drama leading up to the action, so it takes a while to get started.

Also, while the one thing it really has going for it is the fact that all the main characters are people of color, there are so many tropes and stereotypes. A damn shame and huge missed opportunity.

Continue reading our Earth and Blood review below and check it out on Netflix.

You may not be that familiar with genre productions from France, but there are some amazing movies and TV series from this country. In terms of TV series, Netflix alone has two recent horror series with Vampires (2020-) and the much loved Marianne (2019) which was canceled after just one season. Something that disappointed fans worldwide.

Recommended reading and watching: Our review of the French Netflix horror series Marianne >

When it comes to movies, there are new horror classics such as Alexandre Aja’s High Tension (org. title Haute tension) from 2003. And nobody who has watched Pascal Laugier’s Martyrs from 2008 can ever forget it. It also had a decent US remake in 2015 starring Troian Bellisario, but don’t miss the original.

Both movies are (of course) on our “20 Foreign Horror Movies to Watch!”-list. That list also includes the French horror movies Them (2006) and Inside (2007). The latter had the original title À l’intérieur and was remade in 2016. In other words, not only do good genre movies come out of France, they are so good that they are often remade in English.

Earth and Blood is not the kind of movie that will appear on any of our lists. However, I’m sure it will reach a larger audience and some people will probably even enjoy it. I just wasn’t one of them, which was a damn shame since I had decent expectations for this Netflix addition.

Please note, the trailer is quite action-packed and the movie really isn’t. 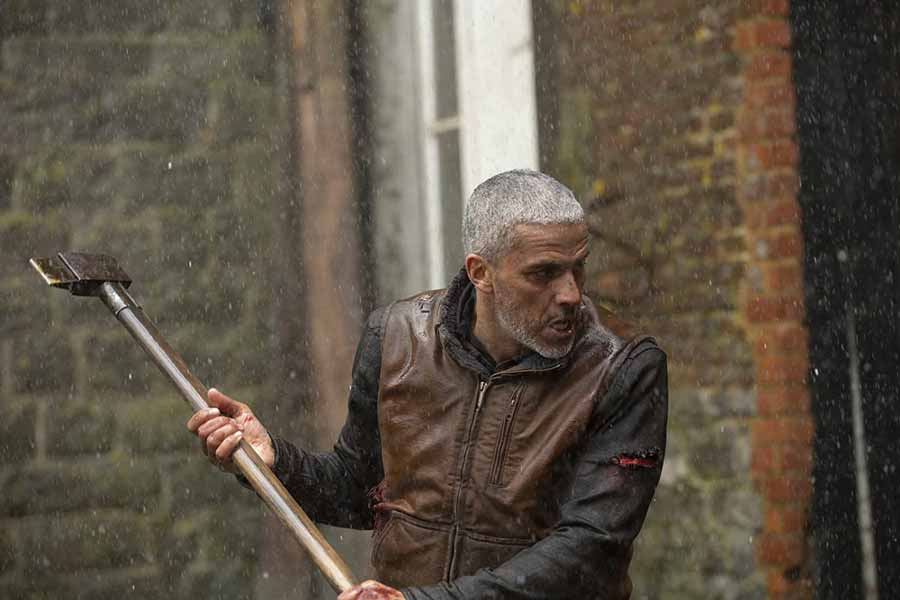 The Earth and Blood ending

The ending of Earth and Blood on Netflix really had to be solid to ensure an overall success. It’s an 80-minute thriller with a survival theme and, if you’re to believe the trailer, an action-paced plot. If the Earth and Blood ending can’t deliver then it’s just 80 minutes of mindless watching something very forgettable.

Don’t get me wrong, this is not a very memorable movie overall, however, the ending does work. Not as anything brilliant or amazing, but very much in line with the movie overall.

And overall, Earth and Blood starts out as a thriller-drama and ends up as a weird action movie that looks like something out of the late 1980s or early 1990s. So many scenes are in this movie simply because the filmmakers wanted a certain shot. Often, it doesn’t actually do anything good for the story.

Also, in the very beginning, we see one character putting on their hearing aid. I mean, we’re very clearly meant to notice this since it’s shot in an almost grotesquely obvious way. Following this scene, we only see anyone communication with them using sign language.

It’s all very strange and just yet another element that’s never fully a part of the actual storyline.

The co-writer for both Lukas and this new Netflix movie is Jérémie Guez. Fans of genre movies should be very happy to learn that Jérémie Guez also co-wrote the zombie horror-drama The Night Eats the World which we highly recommend.

Also on board as a collaborating writer on this new movie is Matthieu Serveau. This is his first feature film, but he already has his next movie in post-production. It’s called Sentinelle and is due out in August of 2020. Once again, it’s directed and co-written by Julien Leclercq so clearly the collaboration on Earth and Blood must have gone well.

Look, I clearly was not impressed with this new Netflix addition, but I will say that I think all the actors did good jobs. It’s just a damn shame the story wasn’t better. Also, the Earth and Blood score sounds like a rip-off from at least one other very well-known score… and now I feel like watching a good ol’ action movie from the 1990s. Go figure!

Earth and Blood is out on Netflix worldwide from April 17, 2020.

A sawmill owner and his teenage daughter become tangled in a deadly feud when a drug dealer stashes stolen cocaine on their remote property.