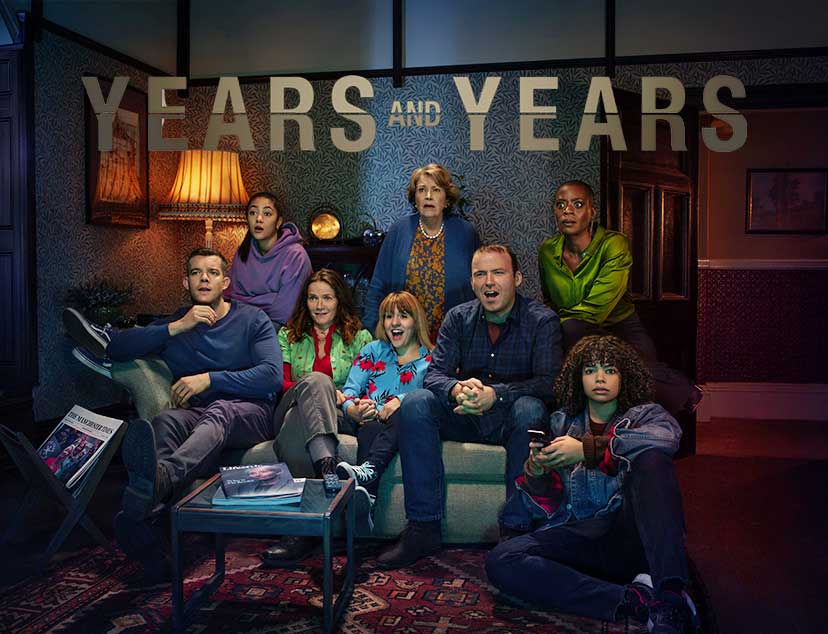 Years and Years is a new futuristic miniseries from the BBC (and HBO in the US and other countries). Created by mastermind Russell T. Davies, it feels like a This is Us and Black Mirror hybrid and I love it! It should both blow your mind and absolutely terrify you. Read more in this review!

Years and Years is a new futuristic thriller series from the BBC and HBO in the UK and the US respectively. The story begins in 2019 and will take us 15 years into the future. After two episodes, things are looking very bleak indeed.

Since this is set in the future, there are also a lot of elements of sci-fi which makes this feel a lot like a Black Mirror spin-off. Especially several of the technological wonders (and problems related to them) become an intricate part of the plot.

However, the story revolves around the Lyons family from Manchester which is more reminiscent of This is Us. We don’t get flashbacks but the storyline in Years and Years moves very quickly and will span a decade and a half.

After episode 1 of Years and Years, you should be left breathless and speechless while anticipating episode 2 with fear and dread! When episode 2 ends, things are even worse and I almost don’t dare guess what will happen in episode 3.

Read more in this Years and Years review and make sure you watch this series as soon as possible. 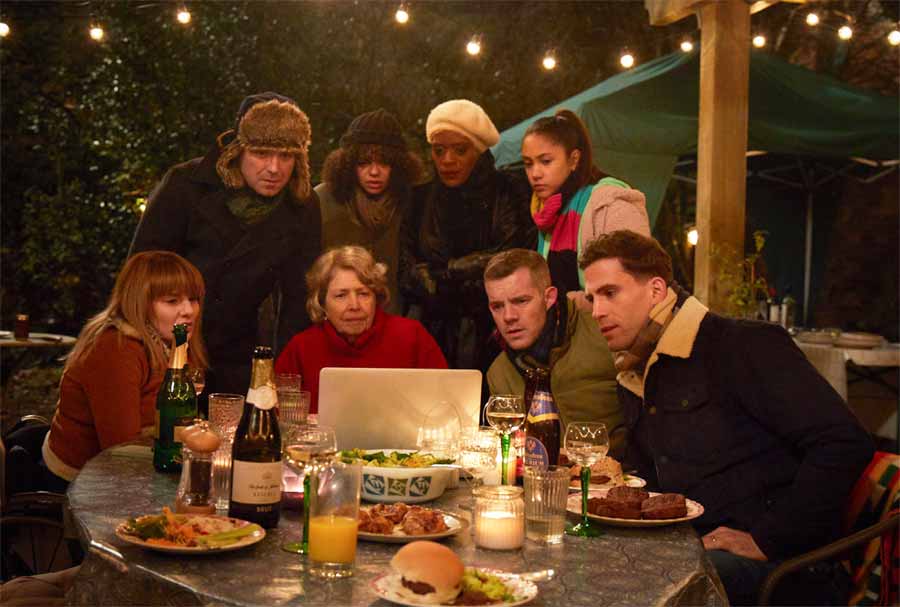 The Lyons family in Years and Years

The British family in Years and Years is wonderfully diverse and realistic of a family in the UK. We’re following four siblings (two men, to women) and their grandmother. After two episodes, we only know very little about their parents, except they miss their mom and don’t want to talk to their dad.

The oldest brother, Stephen (Rory Kinnear), is married to a smart and strong black woman, Celeste (T’Nia Miller). They have two daughters and their oldest daughter is the first to go all Black Mirror. Just watch the trailer to find out how!

The younger brother, Daniel (Russell Tovey), is gay and has a boyfriend who he will marry within the first episode (again, this is in the trailer). He works with housing refugees in temporary camps in the UK and the issue of Brexit is touched upon a few times.

The oldest sister, Edith (Jessica Hynes), is a political activist who we don’t really “meet” until the extremely dramatic ending of episode 1. We do hear of her quite often though since the family is always talking about where in the world she is since she’s never home for grandma’s birthday. This is the one time every year, they all go to their grandmother’s house.

Finally, we have the youngest sister, Rosie (Ruth Madeley), who is a feisty woman working as a chef. She’s in a wheelchair having been born with spina bifida. The fact that we can soon cure various “defects” is also touched upon within the first two episodes as Rosie fears where we will draw the line. 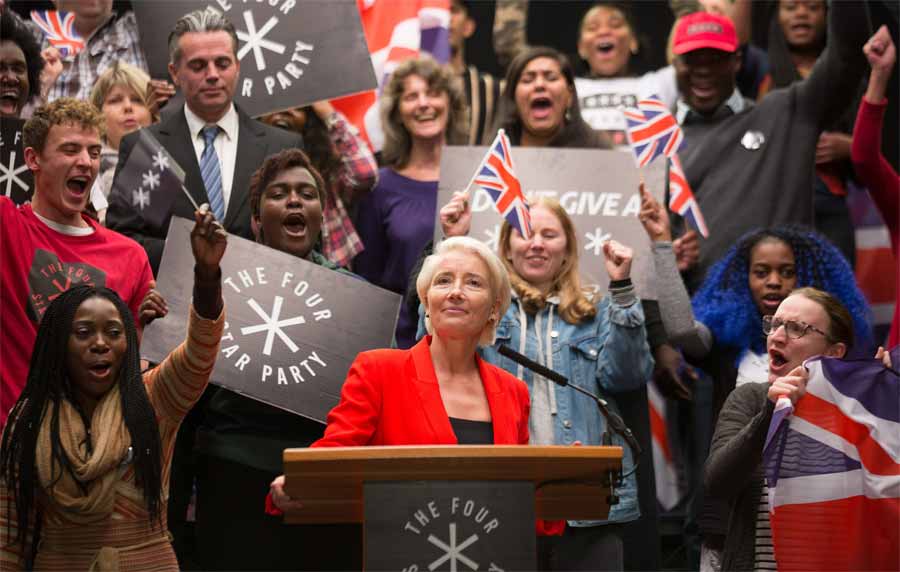 This could actually be us!

While Years and Years is obviously fiction since it takes place in the future, it is very much based on our current world situation. It almost feels as if Russell T. Davies has made this series to show us just how bad it can get.

After watching episode 1, you should be scared sh*tless. I know I was! And not just based on the results of the 2020 US election, because that will not get much better in 2024. Consider yourself warned.

Also, this has a distinct The Handmaid’s Tale vibe. Especially in the sense that it’s all based on actual events taking place now. The days and years, we’re living in right now, are the basis of everything happening in the storyline evolving on Years and Years.

Emma Thompson plays Vivienne Rook, who is the new brazen up-and-coming politician wannabe in the UK. While following the lives of the Lyons family, we also watch her career evolve. She’s a Trump clone while also being very different. Especially since she comes across as a working-class citizen which might not be true!

Of course, Emma Thompson is absolutely brilliant. She terrifies me.

Both the idea of Vivienne Rook and the impact she will no doubt have on the storyline in Years and Years moving forward.

Watch Years and Years on BBC or HBO

Years and Years was created by mastermind Russell T. Davies, who previously wrote on Doctor Who and created the spin-off Torchwood. Also, he created Queer as Folk and co-wrote the award-winning miniseries A Very English Scandal (2018).

I can’t really say more since you shouldn’t get more spoiled. Not more than what the trailer reveals before watching Years and Years.

And, for the love of all that is good, please put away your smartphone and other devices while watching this series. The story progresses wildly fast and a lot of facts are merely mentioned in passing. A news clip or a comment will tell you a lot about what’s going on in the world.

In so many ways, this BBC series feels like a relative of both This is Us and Black Mirror but the real fear, for me, is that it might paint a realistic picture of the near future. In the vein of The Handmaid’s Tale only dangerously close to being fact rather than fiction within a few years.

Do not miss this series! It is one of the best things on TV since Black Mirror and even more terrifying than Netflix’s The Haunting of Hill House which is my other favorite TV series. The horror of Years and Years is (unfortunately!) a lot more tangible.

Years and Years premiered in the UK on the BBC with episode 1 on May 14, 2019. Scandinavian viewers can watch a new episode on HBO Nordic every Wednesday (the day after the UK release).

In the US, Years and Years has the somewhat later HBO release date of June 24, 2019.

As Britain is rocked by unstable political, economic and technological advances, we follow the Lyons family as their complex lives converge on one crucial night in 2019. Then, over the next 15 years, the twists and turns of everyday life are explored as we find out if this ordinary family could ever change the world. 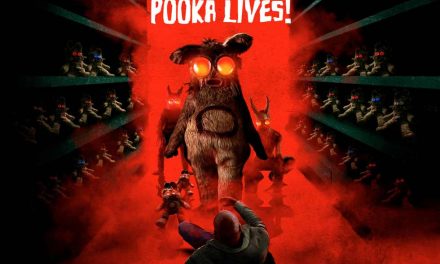 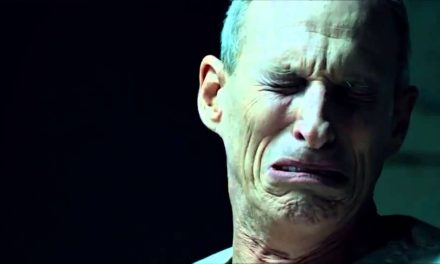 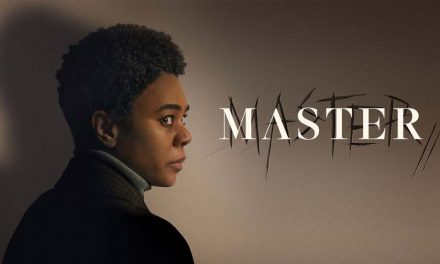 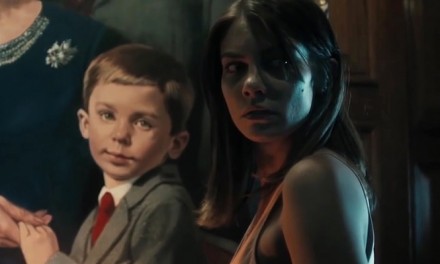