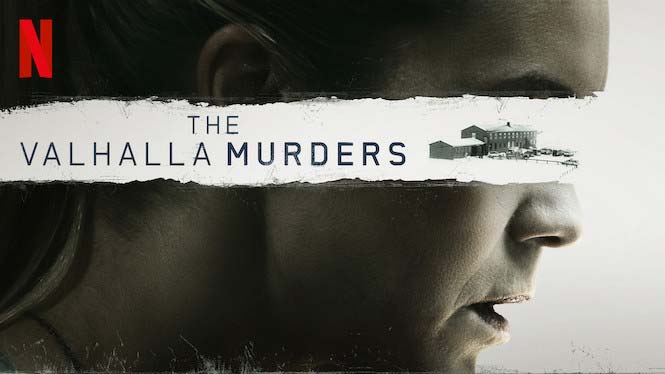 THE VALHALLA MURDERS is a Netflix series from Iceland. It’s a solid crime-mystery thriller that should satisfy fans of this genre. Also, as the title tells you, we’re dealing with several murders. Read our The Valhalla Murders review here!

The Valhalla Murders is a new Netflix thriller series. Within the first two episodes, we come across several murders which makes this a serial killer event. By episode 2, we begin to get an idea of how the victims are connected.

The pace is good and you won’t be left wanting things to move along. There is constantly something going on and you will be entertained by various subplots along the way. Also, the lead character is a damn cool woman!

Continue reading our The Valhalla Murders review below and be sure to check it out on Netflix. We’ve watched the first four out of eight episodes in season 1 for this review.

A serial killer in Iceland

In general, this Netflix series has a very interesting group of characters. Also, since it’s from Iceland and takes place there, you will notice that things are done differently there. For one, police officers and detectives don’t run around with guns all the time. Also, women and men seem to be a lot more equal in many ways.

Yes, this means there are a lot of badass women and very likable men. And it also means that the villains of this story are both male and female. No, I’m not spoiling anything about the plot but simply stating that the women can be just as stubborn, cruel and criminal as the men.

In terms of the actual “Valhalla Murders”, you’ll know why this is the title of the series by episode three. See, once again, things move along nicely. And yes, we are dealing with a serial killer in Iceland. I don’t know much about crime in Iceland, but I do know that murder isn’t a very common occurrence.

That’s probably also why they bring home an Icelandic man who is otherwise working for the police in Oslo, Norway. He’s very broody but you’ll soon find out why he left Iceland for Norway. Well, maybe not why he went to Norway, but certainly why he left his home in Iceland.

Don’t expect to know the actors

You probably won’t know many (if any) of the actors in The Valhalla Murders. Well, unless you’re from Iceland or familiar with movies and TV series from Iceland.

However, I can imagine you’d want to watch more with some of them after having watched this series on Netflix. Especially the lead character, Kata, is portrayed perfectly by Nína Dögg Filippusdóttir. She’s just too damn cool. Also, she’s definitely not perfect which just adds to her being interesting to follow.

In fact, you should expect to also be very irritated with her at times. You’ll probably understand her reasoning but still. You’ll know what I mean by episode 3 and especially episode 4 of The Valhalla Murders.

Actually, one of the supporting actors might be familiar if you’ve watched the Danish horror movie Finale (2018). His name is Damon Younger and he played a key role in Finale just as he does in this series – on a much smaller scale, however.

Also, Björn Thors who portray the police detective on loan from the Oslo police department was in a horror anthology. He was in Patient Seven. But don’t expect to recognize him since he played “Zombie in the street” in the “Undying Love” segment. You can read our review of the Patient Seven horror anthology here >

Watch The Valhalla Murders on Netflix

However, watching The Valhalla Murders, you do not in any way feel that Thordor Palsson is any kind of newcomer. Of course, he isn’t either, but he’s not exactly experienced either. Certainly not in terms of writing, directing or creating a TV series. Fortunately, Netflix was ready to take a chance on him.

If you like crime-thrillers with many interesting characters, then be sure to check out The Valhalla Murders on Netflix. Also, I always find it strangely fascinating when these stories take place somewhere with extreme weather conditions. Either extreme warm weather (Bloodline) or the very cold as it’s the case here!

All eight episodes of The Valhalla Murders is out on Netflix from March 13, 2020.

Season 2 of The Valhalla Murders on Netflix?

The answer is up in the wind right now, but the ending of season 1 certainly leaves room for a second season. While the most important questions are answered, we still don’t know everything and there is a lot more to dive into to.

We’ll update this review with information about The Valhalla Murders season 2 as soon as there’s any official news. Fingers crossed till then!

When a man is found brutally murdered by the Reykjavik Harbor, police detective Kata Gunnarsdóttir is unaware that this is only the beginning of Iceland’s biggest murder case.