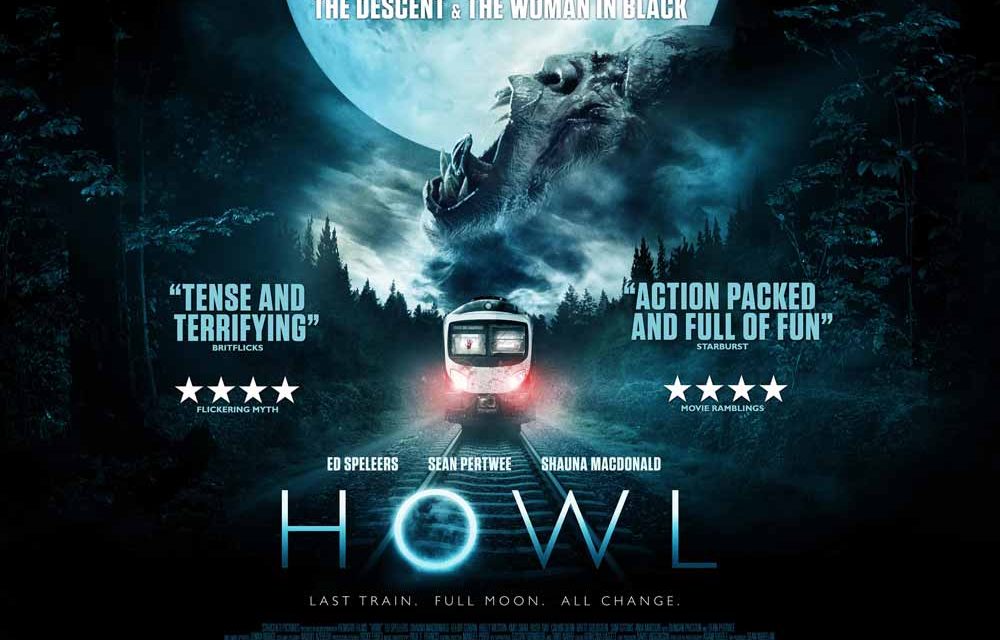 HOWL is a werewolf horror movie on Shudder. Surprisingly, it’s somewhat of an overlooked gem. Read why you should watch it – and what to expect – here in our full Howl review!

Howl absolutely made my day recently!

Have you ever felt that you have exhausted all half-way decent horror movies available to stream?

But, goodness, I was pleasantly surprised by a recent addition to the Shudder lineup. Ah, hope. (Last time I checked, there’s a 30-day free trial to Shudder using the promo code SHUTIN).

I’ll admit, I had never heard of this movie. Howl debuted in 2015 at Germany’s Fantasy Filmfest. No theatrical release. But, after jumping around between film festivals, it went straight to DVD.

And, I almost overlooked it. The movie-poster-style icon chosen for Shudder is hokey and, well, a bit lame.

Thankfully, I did not judge the movie by its poster.

A midnight train ride? What could go wrong?

Howl opens with our meeting the main character (“Joe”, played by Ed Speleers), a train guard / ticket collector coming off his shift. Joe has been passed over for a promotion as supervisor, and the recent supervisory appointee assigns Joe to an impromptu double shift. He’ll be working the Eastborough red-eye train. Because Ken called in sick.

On its midnight route, the train strikes a deer, coming to a halt in the middle of the fictitious Thornton Forest.

It’s a full moon. And horrors are about to ensue.

Admittedly, I intended to have this movie on in in the background, multi-tasking my evening away. But, within about 20 minutes, I was hooked.

Howl provides a creative amalgamation of gore, suspense, and thrill. After reading Agatha Christie’s Midnight on the Orient Express and thoroughly enjoying both the 2016 Korean film Train to Busan and the 2013 film Snowpiercer, I did not think that there was more that could be done in, what I am now calling, “transit horror”.

Exceptionally paced, Ed Speleers (“Eragon”, “A Lonely Place to Die”, “Outlander”) did quite well in what could be described as a “coming of age” role, all the while managing his motley crew of passengers, effectively crafted and written to both attract and repel each other. If you haven’t guessed it by now, this is a werewolf film, and its corresponding costume design, while momentarily shocking, was both effective and thoughtful.

Could Howl be a new classic?

It is hard to best a classic film like An American Werewolf in London, so I will not say Howl did so. But, it could be in the same conversation.

Despite an impressive screenplay, there were moments that Howl could have done without, moments that felt more contrived than inspired (e.g., a conversation between two characters, Kate and Adrian, about a past affair that was never to be).

And, Joe’s love interest, Ellen (Holly Weston, Await Further Instructions) was on the cusp of bringing so much more to the film, in terms of energy, resolve, and hutzpah, but, alas, did not do so.

Howl was directed by Paul Hyett (who has quite an interesting resume). Howl is a fun, thrilling ride.

I had not intended to write a review of this movie. But, right as it ended, and after I learned that this movie was (most likely) criminally unseen gem (and not reviewed on Heaven of Horror), I felt obliged to.

Howl is out on Shudder and Amazon Prime now!

When passengers on a train are attacked by a creature, they must band together in order to survive until morning.