The Night They Knocked – Review

THE NIGHT THEY KNOCKED is a new horror movie. This is a low-budget indie production, but you don’t notice much. The story, pace and production quality is impressive. Also, it’s damn creepy. Read our full The Night They Knocked review here!

The Night They Knocked is a new indie horror movie. It’s a low-budget production, but you wouldn’t know based on the sound or picture quality. The acting is the one thing that doesn’t fully do this movie justice. However, for the most part, even the acting is impressive.

Also, this movie has a runtime of 80 minutes, which is actually spot-on. I am a big fan of keeping movies tight and tense when the story calls for it. Since The Night They Knocked is a very creepy and classic horror movie, it really does call for it!

Continue reading our The Night They Knocked review below.

I was won over by the opening scene

Look, if you’re wondering whether this movie is for you, then you really shouldn’t worry. Once you do watch this movie, I think the opening scene will win you over. I know it certainly did for me!

Also, while there are some elements of the plot that I can’t quite get behind, it’s just minor details. Most of the other issues, I may have had, are answered during the movie. That just earns extra points with me, because I love being proved wrong when I think filmmakers are forgetting something.

The one minor detail, I still can’t quite get behind, is the fact that everyone manages to leave their cellphone laying around at the same time. Sorry, but we are so damn hooked to that cellphone connection that I cannot believe at least one person wouldn’t keep their phone on them at all times.

As I said, it’s minor. Also, it wouldn’t really have made much difference in the long run, which is why I can forgive this quite easily. Yeah, I don’t think I’m spoiling anyone when I say that this movie is pure horror. In other words; Oh yeah, there will be blood! 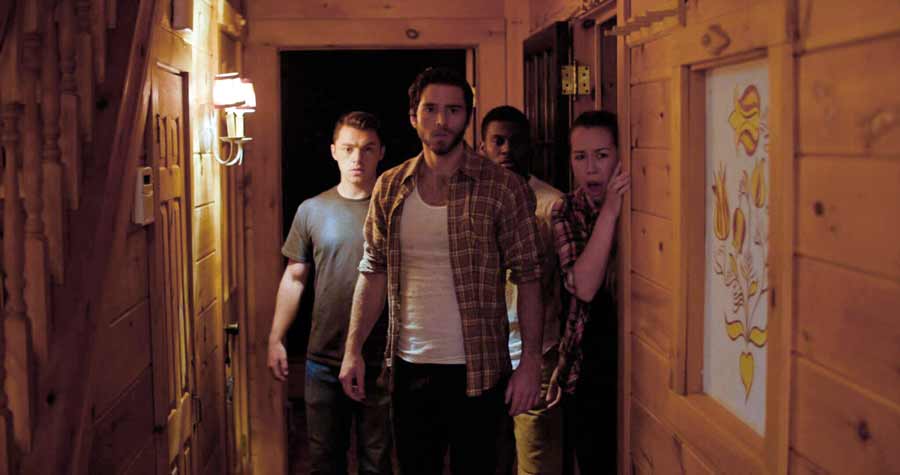 The cast of The Night They Knocked

As mentioned earlier, the only actual downside to this movie is when the performance of some actors falls a bit short. It doesn’t happen much, which means it’s all too apparent when it does! Then again, it also makes it wonderfully clear when actors manage to deliver really solid performances.

Speaking of very solid performances, I have to mention Jack Buckley, who portrays Derrick. While his character may come off as very stereotypical at first, it evolves from there. And in all the right ways! Even in scenes where others are a bit “off”, Jack Buckley pulls the scene together and makes it work.

Also, some of the villains (those that come knocking) are really awesome. Honestly, villains tend to be “easier” to portray in the sense that they don’t have to act in any normal or realistic way.

Still, the main “bad guy” for most of this movie is truly wonderful. The perfect blend of realism and craziness for that kind of character. He’s portrayed by Connor Roberts and I really hope to see him in more horror movies. Finally, I also want to mention that Deirdre Koczur worked really well for me.

And, just to be clear, no actor was bad during the entire movie. We’re only talking a few scenes or lines that jarred and felt “out of touch”. I don’t want to bash anyone since The Night They Knocked works as a whole!

Check out The Night They Knocked when you can!

The Night They Knocked was written and directed by Sean Roberts. This seems to be a huge passion project for him and he should be extremely proud of the outcome. Here at Heaven of Horror, we are certainly looking forward to whatever comes next from Sean Roberts.

Hopefully, it’ll be another horror movie – or something in the thriller or sci-fi genre, since we also cover those.

This was the third movie for Sean Roberts as a writer and director. His first movie was The Wicked Ones from 2013 and then Traffickers in 2015 which also starred Jack Buckley. The Night They Knocked is the first movie he didn’t act in as well while he has both produced and co-edited all three movies.

The Night They Knocked has been playing at film festivals. We’ll update this review with a release date on VOD or streaming as soon as we know more.

In the heart of the Pocono Mountains in Pennsylvania, a group of college students staying in a secluded vacation home enjoy one last weekend together before graduation.

In what was intended to be an idyllic weekend getaway, drama between friends and a brooding sibling rift threaten to send the weekend spiraling out of control.

Just when it seems like tensions are at their peak, a knock at the door propels the night into mayhem and brutality as a pair of homicidal maniacs besiege the home with bats and box cutters.