I really don’t like to trash anyone’s work, but I just can’t say many nice things about The Blackout Experiments – consider yourself warned! 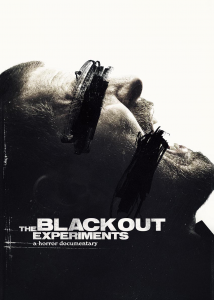 I’m pretty much a happy-go-lucky girl, who loves movies and just happens to love getting scared out of my wits every now and then, but that definitely didn’t happen while watching The Blackout Experiments. I mean, not only wasn’t it at all creepy – unlike the feeling I got from watching the trailer – but it was just ridiculous and literally unbelievable in so many ways.

This is like the documentary version of Fifty Shades of Grey. I know, I know, but just stay with me here! When you suddenly saw every middle class bored house wife reading Fifty Shades of Grey like it was the latest part of Oprah’s Book Club, they were all convinced that they were now into BDSM. But really, they would run screaming away from any real action of that sort… so would I, for that matter, it’s just not for me. TMI? Oh well. My point is, Fifty Shades of Grey is just some fan fiction that got picked up by a publisher at exactly the right time, and it took off, but nobody really understood that it was in fact just fan fiction (and not even the good stuff) and didn’t mean the world was suddenly into bondage or S/M.

The people in this movie would definitely be going around wearing T-shirts that said they were very much into “The BDSM”. Yep, we’re dealing with those kinds of people. You know, the ones who believe they have BIG secret, but simply will not shut up about it, so everyone knows. They have a “secret group”… which they’re talking about constantly in The Blackout Experiments where we get their full names – and get to see the kids and spouses for those who have a family. I mean, it’s no secret that the main “star” of this documentary is called Russell Eaton and some of the others in this very secret club are called Bob Glouberman, Allison Fogarty and Abel Horwitz. It’s all right there in the press releases!

Also, the people doing these Blackout events (Josh Randall & Kristjan Thor) are at first hesitant to participate, but before long they’re calling up the director and letting them know their every move and new ideas. A call for attention if ever I witnessed one. But hey, I can relate to wanting people to love your work. It would just be nice if you could all call it what it really is: An introduction to sexual experiments masked as a “secret and special” horror society.

Oh, but wait, it does get creepy when they tattoo the participants in The Blackout Experiments. Or, you know, they pretend to tattoo them, but really it’s just magic marker. I’m sorry, but I’ve seen kids with fake tattoos that are more serious than this. And then – this is when I really started getting pissed off – these people, who by their own admission are addicted to the Blackout experiments, are calling themselves “survivors”? Are you fucking kidding me? Did you survive cancer? The holocaust? Rape? 9/11? No, you chose to take part in a sexual experience – which you wholeheartedly believe is something else even when you’re clearly jizzing in your pants while its taking place – and you even choose to go back. Again and again! Do they pay for this? I’m not sure, but I’d guess so.

Okay, bottom line; Should you watch this? Umm, yeah, actually, you should. Because people are fucked up and the next time someone wants to say that people who love horror are messed up, you can refer them to this movie, where people call themselves survivors for participating in something they get sexual pleasure from. The real survivors are those watching this – but yeah, I do feel sorry for them. These people have some issues that should be dealt with in a healthy way, but instead they’ve found an addiction to something they can’t even call by its true name.

In any case, kudos to the people responsible for making the trailer. That sucker reeled me in, but turned out there was no meat on the fish. Okay, forgive the analogy, but really, it makes as much sense as the people featured in The Blackout Experiments.

If this “documentary” had an actual purpose, then we would’ve known much more about why these people participate, and many of the points in the above would have been addressed. Instead, it’s just one big infomercial for Blackout. And I’m sure it’ll continue to been a huge success – in part thanks to this film. Just look at the Fifty Shades of Grey craze for reference.

The Blackout Experiments is out in select theaters and on demand starting July 22, 2016

This documentary follows a group of people who discover the ultra-scary, psycho-sexual horror experience Blackout, and develop an obsession that hijacks their lives and blurs the line between reality and paranoid fantasy.