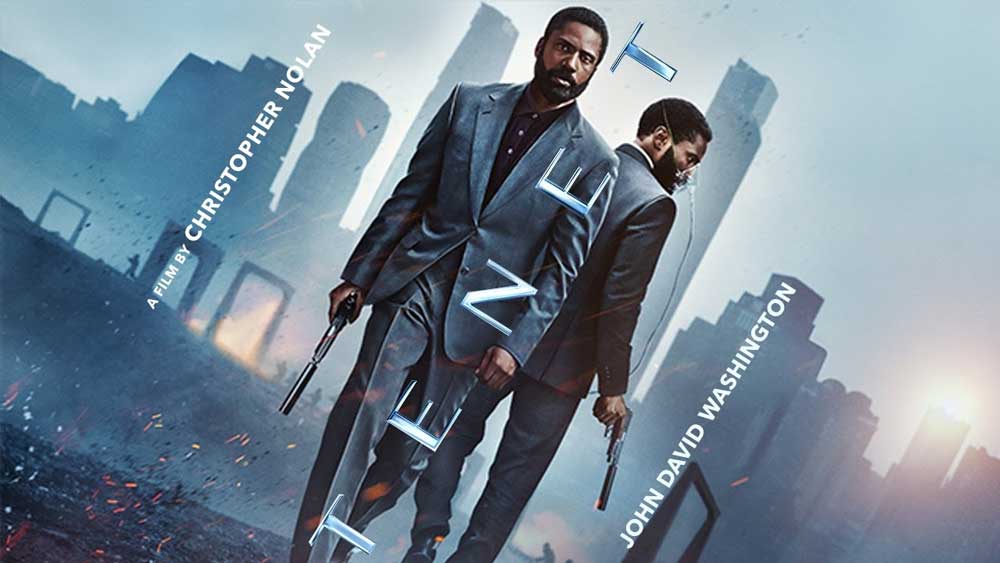 TENET is the new Christopher Nolan sci-fi thriller. Intense action, gorgeous visuals, and a mindf*ck of a plot. Many will want it explained, but just check it out for yourself first. Read our full Tenet review here!

TENET is the new Christopher Nolan movie that easily comes across like an advanced Inception. Obviously, this sounds crazy in itself, but it does work. Especially since the imagery is beyond gorgeous and the effects – often practical rather than VFX – create intense action.

And yes, the plot is one hell of a mindf*ck which is bound to have many searching for a “Tenet explained”-post or video before attempting to watch it. Please don’t!

Continue reading our Tenet review below which will not include spoilers. Even if it did, you wouldn’t catch or understand them anyway.

If you want the Tenet movie explained before actually watching the movie, then you’re a damn fool. Any fan of Christopher Nolan should know, that you’ll only ruin it by being spoiled before watching. And if you don’t care for his previous movies Inception and Interstellar, then don’t expect to like this one.

The only explaining of Tenet you’ll get here is that you should think of this movie as Inception in an upgraded version. We’re no longer working inside someone’s dreams but in the real world. Things aren’t as you know them to be, and you will have to relearn your understanding of basic physics.

Also, there are definitely elements of the world and logic you know from Terminator movies (including Terminator: Dark Fate) since we’re dealing with time travel. In very different ways than James Cameron’s Terminator, but still. With this in mind, you should be closer to understanding Tenet.

Just watch the movie and let the story wash over you just as it does the protagonist. He is as lost as the audience for much of the movie, but you will get on board.

If you watch it in a movie theater without interruptions, anyway. This is not the kind of movie you “half watch” while also being on your phone.

Tenet does definitely differ from other Nolan movies by being an actual spy thriller with lots of sci-fi elements. We’re dealing with preventing World War 3 and an actual apocalypse (of sorts), which means both the CIA, MI6 and various characters from the criminal underworld work together. In their own weird way, that is!

This results in amazingly vibrant and dynamic scenes with very different characters. Even though the main protagonist (this is what he’s called throughout Tenet) is portrayed by John David Washington, some of the other characters really made this movie for me.

Don’t get me wrong, I think John David Washington (son of Denzel and awesome in BlacKkKlansman) was great in Tenet and worked perfectly as the protagonist. He just wasn’t the most charismatic character.

However, the characters “Neil”, portrayed by Robert Pattinson, and “Kat”, played by the amazing Elizabeth Debicki (The Cloverfield Paradox, Widows) definitely were! These two characters created the beating heart of Tenet in their own unique ways.

Also, I have to mention that Robert Pattinson should win over everyone after this movie. Having seen him deliver the most amazing performances in movies such as The Lighthouse (2019), The Lost City of Z (2016), and now in Tenet, I am so ready to see him as the next Batman.

Watch Tenet in a movie theater!

As per usual, Christopher Nolan himself wrote and directed this movie. Horror fans should be happy that the editing was done by the amazing Jennifer Lame, who also edited Hereditary (2018) since Nolan’s usual editor wasn’t available. Cinematographer Hoyte Van Hoytema is back with Nolan – he also did Interstellar and Dunkirk.

When it came to the score, Nolan also had to be without Hans Zimmer who is working on Dune (2020). However, Zimmer was quick to recommend Ludwig Göransson, who did the score for Black Panther (and won an Oscar for it). The result is a trippy and absolute perfect score for Tenet. You’ll see… and hear!

To me, Tenet is very much in line with Christopher Nolan’s Inception and Interstellar. Watching them as a “warm-up” to enter yet another of Nolan’s worlds is definitely a good idea. Just to get your brain a bit more limber and accepting of the sci-fi craziness.

Bottom line; If you like the stories that come from the weird and amazing mind of Christopher Nolan, then go watch Tenet as soon as you can. Watch it in a movie theater if at all possible, to get the full experience, and do not read up on any spoilers or “explained” articles beforehand. You can do that afterward if you want!

Armed with only one word, Tenet, and fighting for the survival of the entire world, a Protagonist journeys through a twilight world of international espionage on a mission that will unfold in something beyond real time.