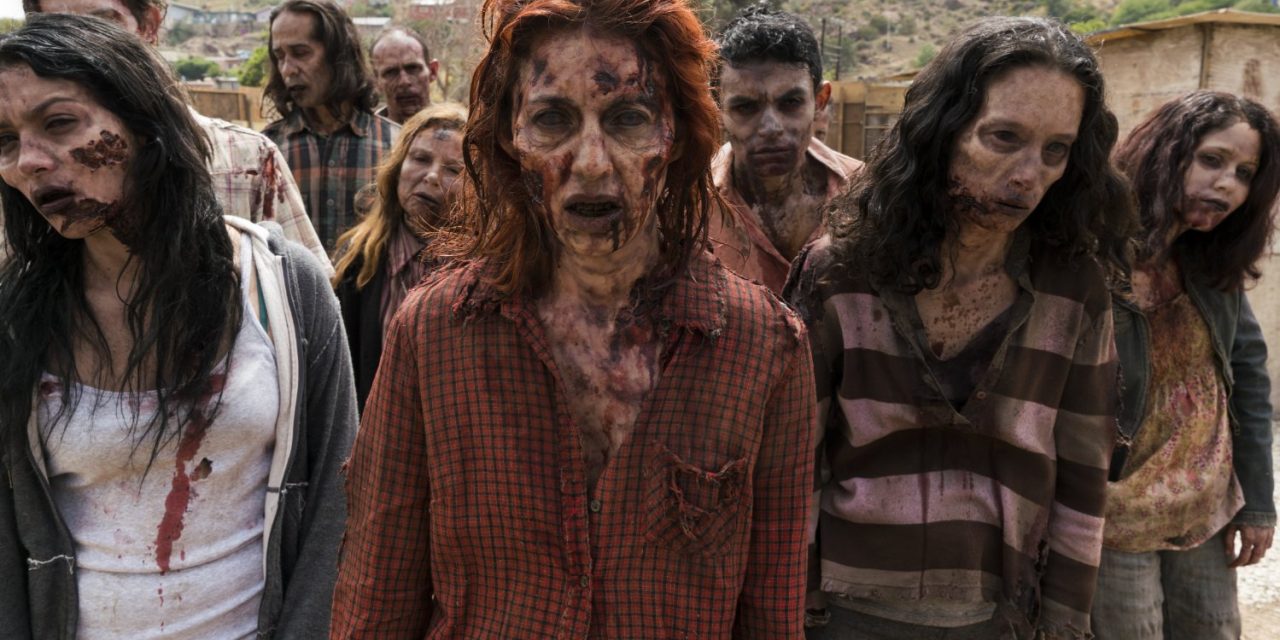 It was going so well, but bad decisions and strange friendships take over again on the latest episode of Fear The Walking Dead.

The past two weeks have been so good on Fear The Walking Dead, but this week was a slide back to some of the annoying plot developments. Not too bad, but still not as good as we were hoping. Read the full recap of last week’s episode here!

The title of this episode is Pillar of Salt which could be a nice reference to the dangers of looking back, when you should be moving forward to better things.

This episode of Fear The Walking Dead opens with characters we don’t really know, but that’s hardly a problem. In fact, this can be very interesting and lead to new storylines – i.e. how the hotel first came into contact with the infected. A husband and wife are leaving the compound that Nick (Frank Dillane) is now calling home, with their young daughter in tow. The girl wants to stay, but her father says it has become dangerous. They manage to escape via the wall of the infected by killing one, and then using the blood as camouflage. 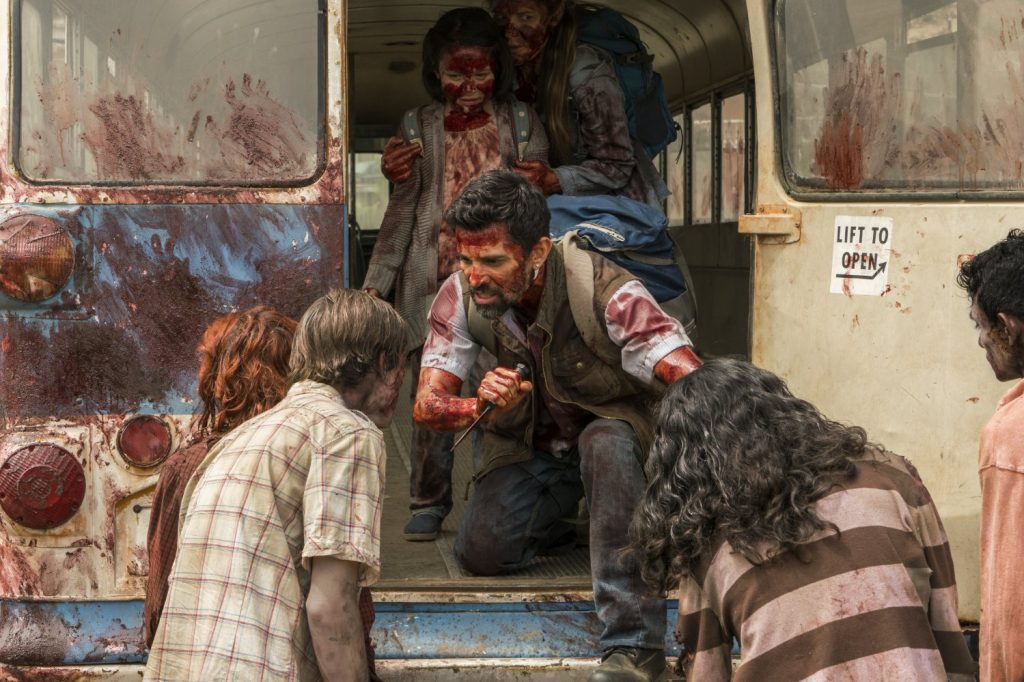 Am I the only one, who finds it strange that they want to honor and keep the infected, yet have no problem killing one at random whenever they need to leave their little commune?

Anyway, they make it out, but just as they do, a truck comes by. They hide, but of course they’ve been spotted. Not by someone from their village, but from the Supermarket gangsters, who want more drugs. Now that Nick is helping Alejandro water down the pills, the addicts crave more and faster. The small family is taken back to the supermarket, so they can get information out of the father. 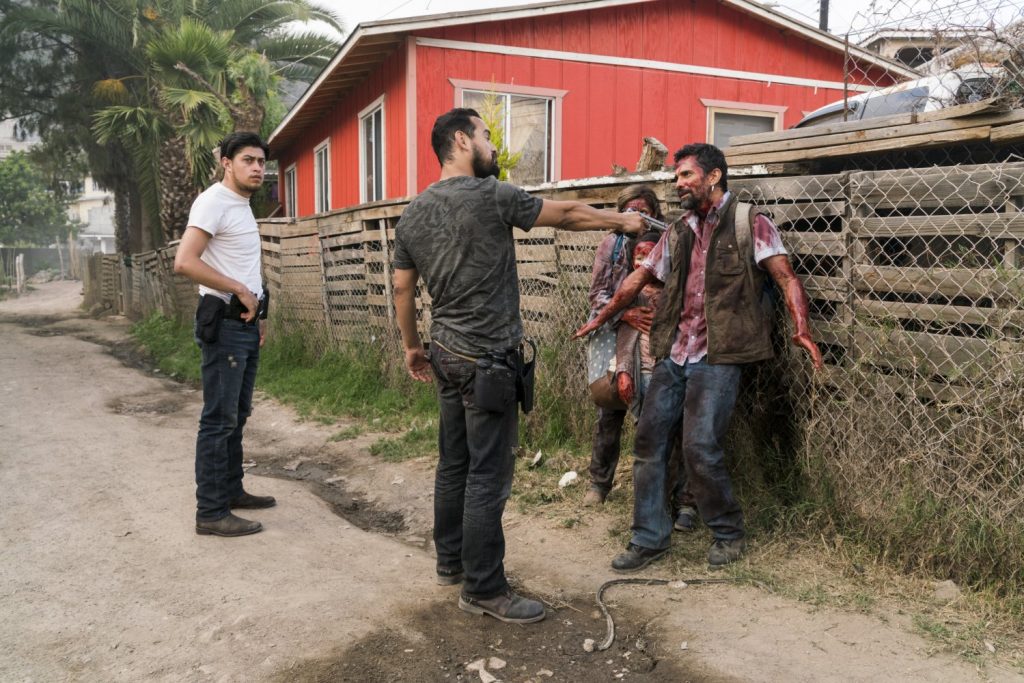 Back at the hotel, things are going pretty well. They’re planting seeds (literally) and making gardens, while also getting the generator working, so they can make ice cubes. I mean, who can survice in a world without ice cubes for their water, when a zombie apocalypse is upon you?! I get that ice is nice, but they’ll have to go looking for gas to get it running, so making ice seems like a perk that should be reserved for special occasions. Instead we see Madison (Kim Dickens) bringing Alicia (Alycia Debnam-Carey) and Hector (Ramses Jimenez) glasses of ice water while learning to surf.

First of all, very cold water is not good for you. Second, I would not be eager to head out into the water that they just lured a bunch of the infected into. But that’s just me and this is Fear The Walking Dead, when not at its best. 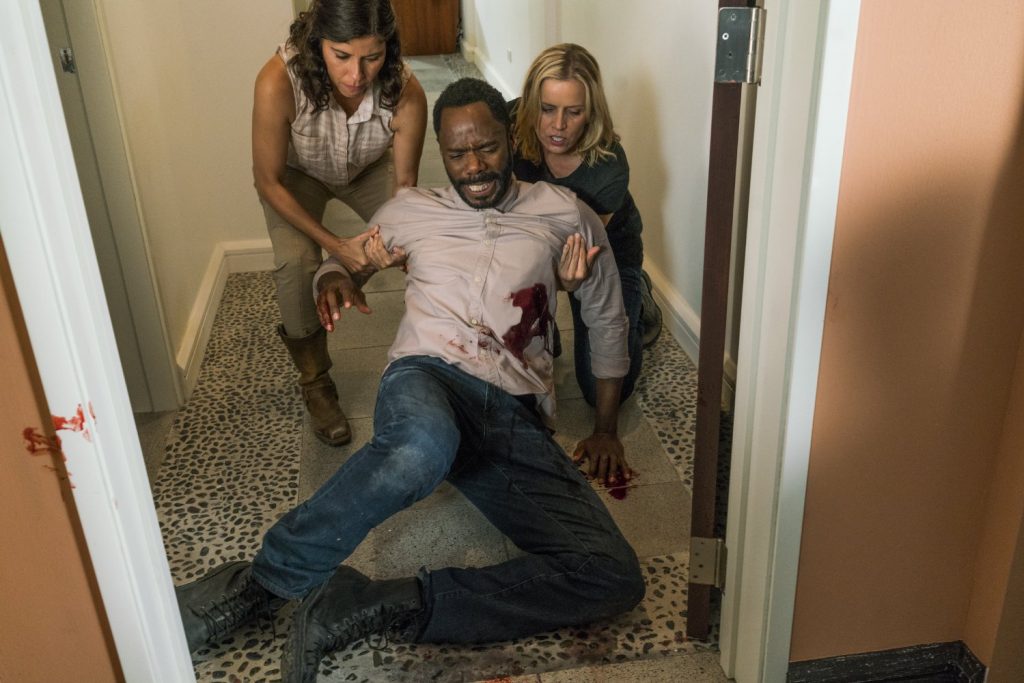 Anyway, nothing good lasts long, and this time it ends when Victor (Colman Domingo) opens a door and is immediately stabbed in the stomach by the mother of the bride. Apparently, she’s now grieving the loss of her infected daughter, and wants revenge. Why the groom would tell her that it was Victor is beyond me! I mean, they’re all supposed to work towards getting along, so why not make up a story that the mom could handle and accept?

Well, at least he had the chance to get a scotch on the rocks before getting stabbed, and now he’s requesting something more to drink, while he waits for Madison to go find drugs. Apparently, Hector’s cousin is out somewhere, where supplies can be found. Of course, we all know it’s the gangster supermarket before they tell us. Hector won’t go because he’s upset with his brother, since he wouldn’t stay at the hotel with his family. Also, he’s a drug addict like all the other people at the supermarket.

Elena (Karen Bethzabe) and the groom, Oscar (Andres Londono) join Madison in the supply run. Fortunately, there’s someone in the hotel, who was training to become a doctor, so it’ll probably be alright. They do seem very concerned with blood loss, when hardly any seems to have been spilled. I mean, based on what we’re shown, any woman on her period should be petrified of suffering from blood loss before lunch. 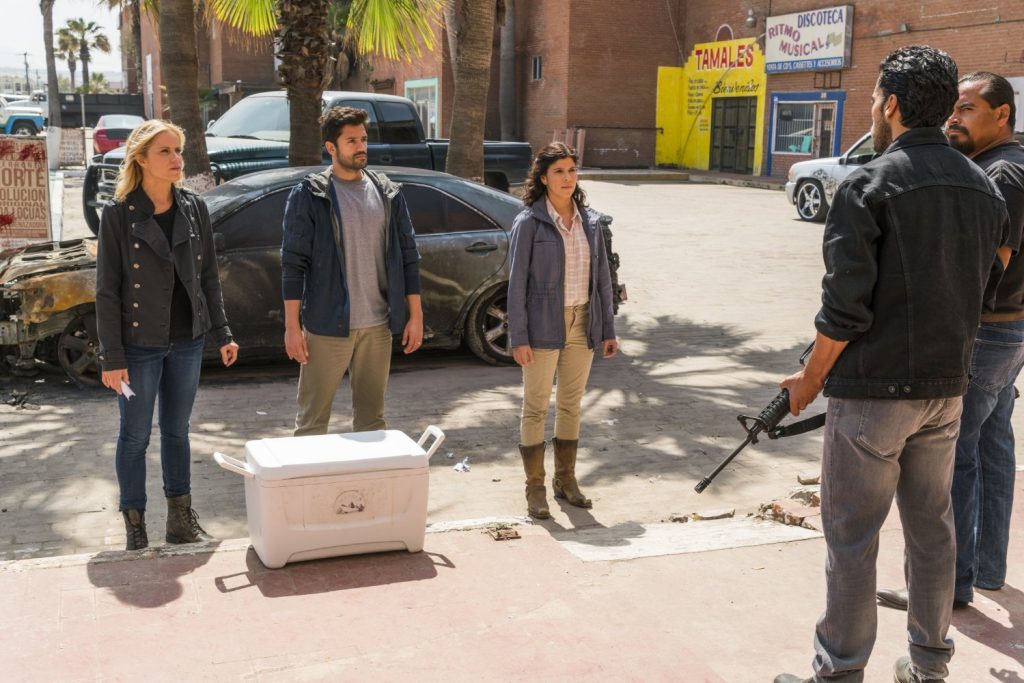 They get to the supermarket and trade fish – oh yeah, they’ve also got a good fishing thing going at the hotel – for medical supplies. The supermarket gangsters like the fish, but they love the ice. I don’t blame them, but sure hope they want it for more than just ice water. While Elena and Madison get the supplies – Oscar has to wait outside – Madison overhears someone being tortured. Immediately, she thinks of Nick, so when Elena translates something for her about a “boy with rat hair”, Madison just knows it’s her boy. She’s not wrong, but she sure is willing to risk a lot – including Victor’s life – by interfering with the supermarket gangsters. 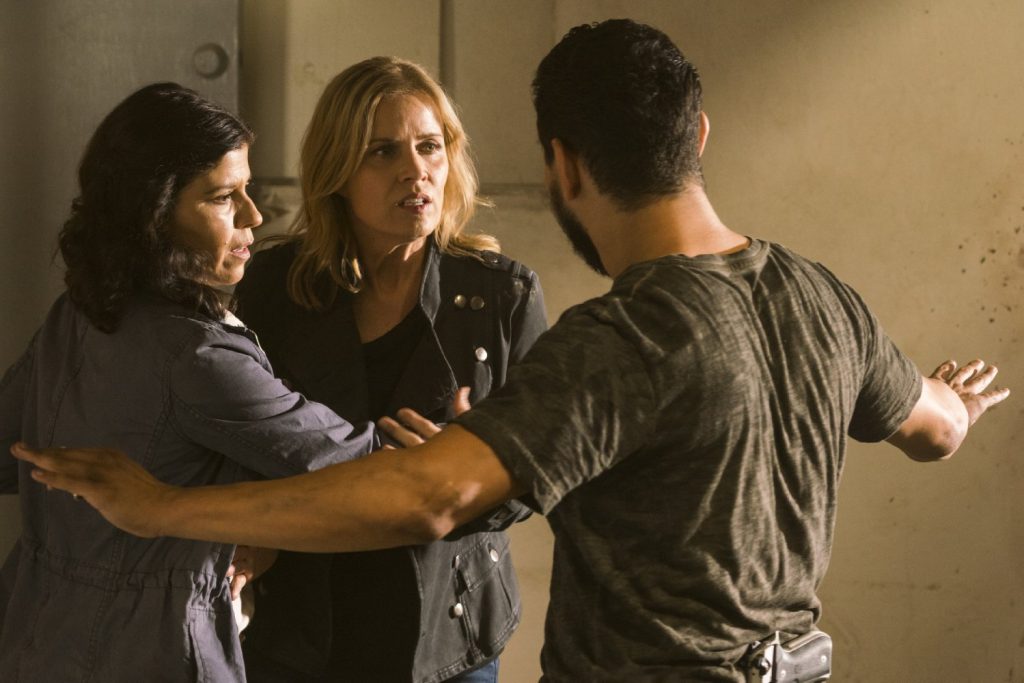 Alicia and Victor have a little heart to heart while she’s helping him put pressure on his stabwound. They keep telling poor Victor to just “put pressure” on it, but the man has been stabbed. I mean, why don’t they just tear up some sheets and wrap them around the poor guy. Anyway, that’s just not how you do things on Fear The Walking Dead, I guess.

In general, I have to say that Victor and Alicia tend to be the wonderful voices of reason. And when Elena, Madison and Hector finally return with the supplies to help Victor, Alicia is forced to – once again – have a talk with her mom. Alicia questions why the supply run took so long, and Elena is quick to say what Madison did, when she thought someone talked about Nick.

Madison rushes to the roof to use even more of the precious generator energy to turn on all the lights of the hotel. Including the sign on the very top of the building, which is like a beacon to every gangster and desperado nearby. 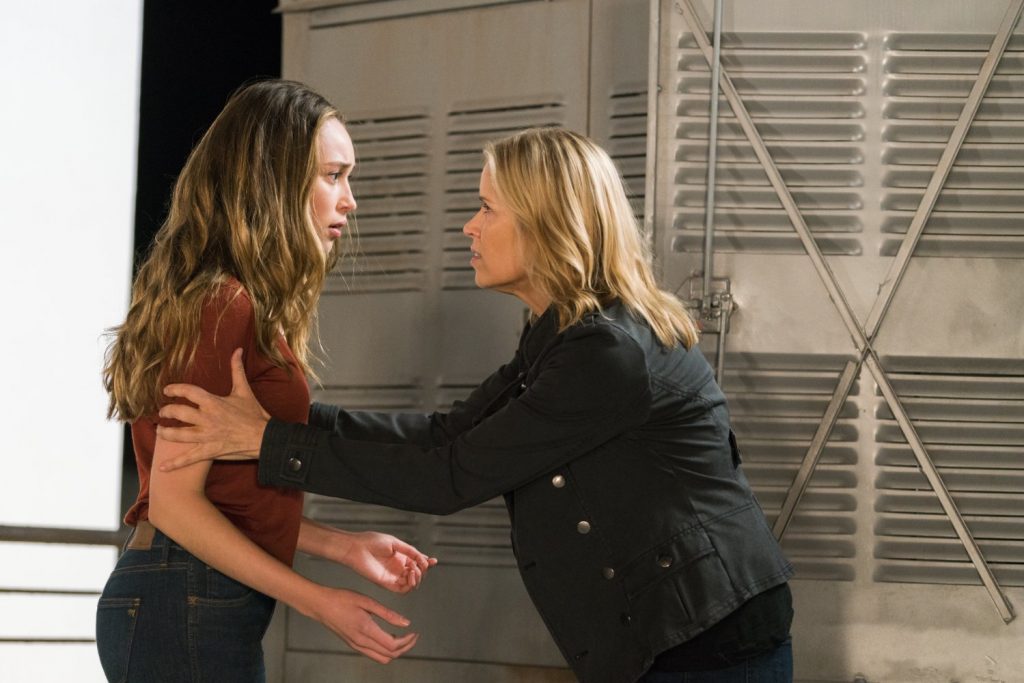 Alicia pleads with her mom, and says what I’ve been yelling at Madison for most of this episode: Nick isn’t lost, he chose to leave and live somewhere else! Madison, who is usually so levelheaded, seems to lose her mind whenever it comes to Nick. She tried to explain to her daughter that as a parent, you want to do everything for your child. Of course, Alicia – again being the voice of reason – reminds her mother of the very obvious fact that she is also her mother’s child. And she’s the one, who didn’t leave.

Madison seems to ponder this fact as the camera goes to show us someone watching the hotel sign. The lights go off again, and we see that it’s Travis (Cliff Curtis) and not some gangster. He’s alone, which should mean he has finally ditched the annoying teenage son, who is now also a killer of non-infected human beings.

Meanwhile, the long lost son, who isn’t lost at all, Nick, is enjoying his time with Luciana (Danay Garcia) at her place. Someone comes knocking on her door to tell her about the family leaving. Alejandro is in a very strange mood, and tells everyone that nobody else will leave until he allows it again. Nick talks to him, and Alejandro confides that he sees Nick as his own son. I’ll admit this took me by surprise since he’s known Nick for all of a few weeks at most, while Luciana was the one who literally saved his life. But again, that’s probably just me.

Anyway, Nick doesn’t seem to feel the same way, because he plots with Luciana to do their own thing immediately after talking to Alejandro, who is clearly loosing his grip. 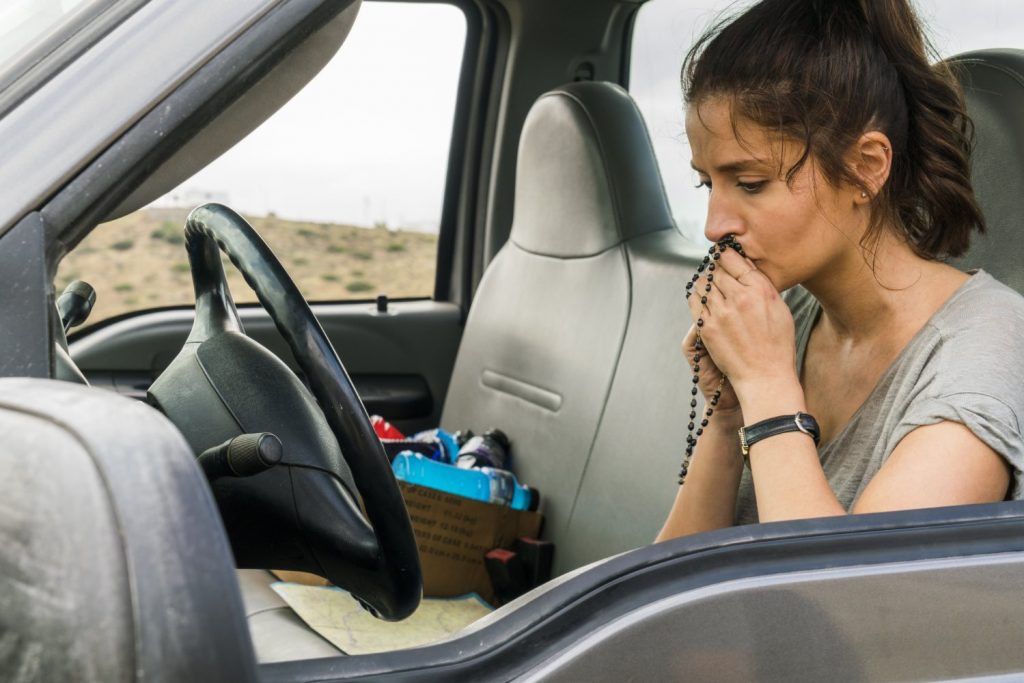 In other interesting news, we’ve found the truck that transported Victor, Madison, Alicia and Ofelia to the hotel. We’ve also found Ofelia, because – unlike what Victor believed – it wasn’t Alicia who took it, but Ofelia (Mercedes Mason). This also means Ofelia up and left Alicia and the rest of her group, to fend for themselves, but I don’t think we’re supposed to dwell on this. You see, they’ve finally decided to give Ofelia a bit of a backstory. Apparently, she was sneaking around with a boy, who proposed to her, while on a trip in Mexico. He had gotten a great job in New Mexico and wanted her to moved there with him. Ofelia was weary to leave her parents in Los Angeles, but did seem to accept his proposal. 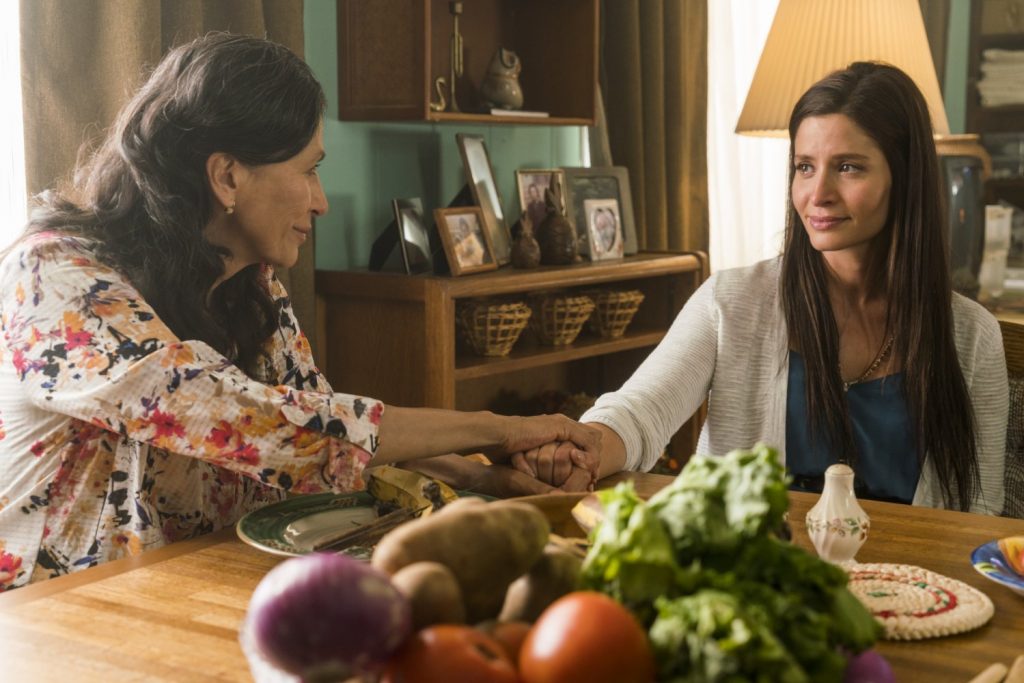 We also see her talking to her mom about how she met her dad. It’s a really great scene, which also reveals that her parents know nothing about her even being in a relationship. I love getting some backstory on Ofelia, but I would hope they build more on it, because this seemed like it came out of nowhere and could’ve been in any episode. In some form, anyway. The last we see of Ofelia, is when she takes the truck and heads back towards the United States. I’m guessing she’s heading towards New Mexico. Not like she couldn’t have told the group, though of course, they probably wouldn’t just have let her take the truck. Then again, there’s no shortage of cars or gas yet, so maybe they would have.

This is where we leave everyone on Fear The Walking Dead

Madison is still chasing Nick, who has no desire to be found. Alicia is building a life with new people, while Victor will hopefully survive. Travis has spotted the hotel and is probably heading their way and Ofelia is going back to good ol’ US of A. Oh yeah, and the mother of the bride is confined to her room indefinitely, so she can’t hurt more people. If anyone else hurts another person at the hotel, they will be exiled. It is law! As spoken by Madison and seconded by Victor, Alicia and the rest of the top dogs at the hotel – including the groom, Oscar.

At the Colonia, Alejandro reveals his darker side. A hotel resident becomes violent and Madison springs into action.

We’ll be back next time with a recap for episode 13 of season 2. Watch the promo for the episode right here: