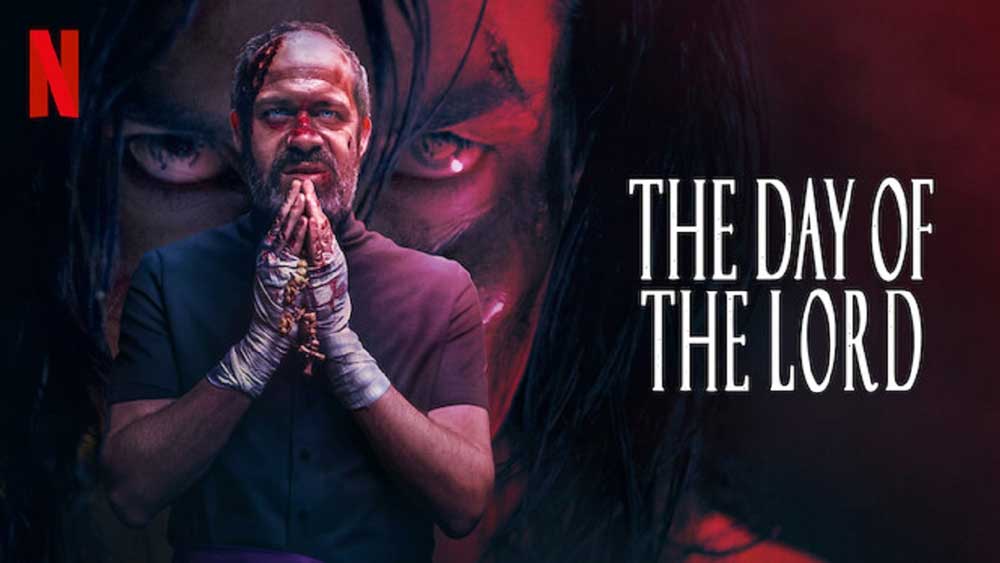 THE DAY OF THE LORD is a new Netflix horror movie from Mexico. We’re dealing with a pretty classic exorcism story that changes style so many times your head will spin. This review contains clearly marked spoilers regarding the ending. Read our The Day of the Lord review here!

In essence, this Mexican horror movie has a very basic exorcism plot. It tries to go off in different directions but ends up being extremely predictable. As in; If you try to guess the next scene or line, then you’ll probably be right! This is despite the fact that the style (and even genre) of this movie changes so many times your head will spin.

The type of exorcism performed in The Day of the Lord is quite different. It basically involves a priest beating the possessed senseless. All while sporting a creepy smile, since he clearly loves kicking the devil’s ass. He literally uses a teenage girl as a punching bag. Yeah, it’s as fucked up as it sounds!

Actually, it doesn’t end there, but we’ll get back to that in the next segment which does contain some spoilers.

Through it all, however, there is one actor that shines. The actor portraying the teenage girl, Raquel, accused of being possessed. Her name is Ximena Romo and she is awesome. It’s just a shame that the movie overall simply does not do her performance justice. Still, it’s a great introduction to Ximena Romo for many. Hopefully, we’ll see her in more genre movies again soon.

Also, I have to give props to Juli Fàbregas who plays the priest, Menéndez. He is so creepy and weird which should make everyone confused while watching this Netflix horror movie. You might recognize Juli Fàbregas from [Rec]². 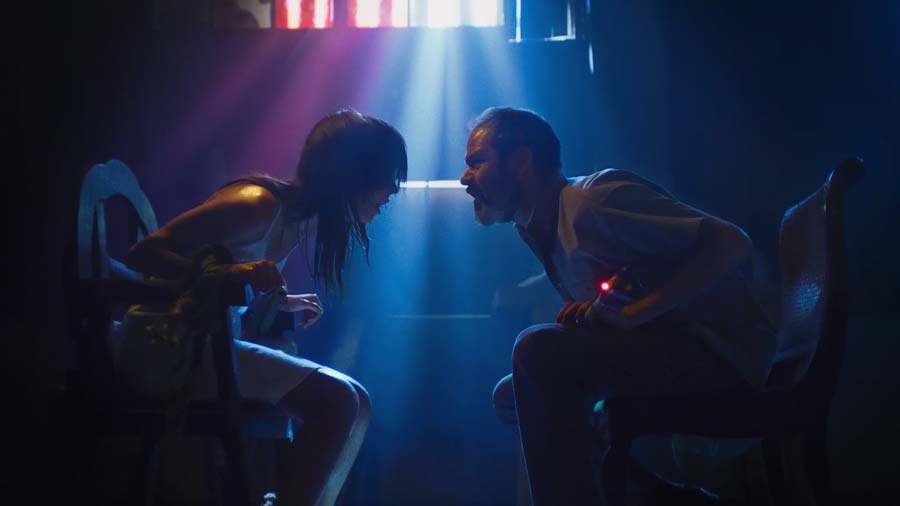 The ending of The Day of the Lord *minor spoilers*

I won’t be doing a “The ending of The Day of the Lord explained” bit here. However, after watching this movie on Netflix, I felt the need to comment on some elements which would include spoilers. One of them is the fact that whatever the story might be indicating, just know that (of course!) a teenage girl will always turn out to be a demon!

The ending of The Day of the Lord comes after the movie has changed directions so many times. It keeps showing us that the priest is creepy as hell (pun intended) and that the girl is perfectly normal. Only to then pull a “plot twist” that this is not at all how things are.

Well, that’s not really a plot twist; You’re lying to the audience by showing us one truth and then going “Gotcha!” No, you didn’t get me. What would have been truly ballsy was if the priest turned out to really be a creep (which he never stopped being in my eyes, anyway). Also, the final line from the teenage girl almost made me throw up in my mouth.

While the horror-comedy parts of The Day of the Lord ending were extremely entertaining (mostly thanks to the performance from Ximena Romo), the actual ending needs no explanation. It’s the same as all the other exorcism movies.

Watch The Day of the Lord on Netflix now!

Santiago Alvarado is the writer and director of The Day of the Lord (or Menendez Parte 1: El día del Señor as it’s originally titled). This is his second feature film after Capa Caída from 2013 which was a comedy. While watching this new Netflix horror movie, I kept hoping it would turn out to be ballsy enough to actually go in the direction it kept hinting at.

Unfortunately, this didn’t happen and it’s a damn shame. The Day of the Lord could have been the kind of movie that broke the mold and went a different way. Instead, it’s just another in the line of exorcism movies. Showing the audience one thing and then turning it on its head isn’t clever, it’s just straight-up lying to the audience and then going “Gotcha!” when you tell the truth.

We’ve seen a few too many movies pull this trick. All of them surely believing that they’re the next M. Night Shyamalan, but their storytelling is too ham-fisted to succeed at this. Still, it’s Halloween and if you like exorcism movies, then you should definitely check this out.

If you want to watch a much better movie featuring exorcism (that also plays out in Mexico), then you should look forward to The Old Ways which just premiered at the Sitges film festival. Read our review of The Old Ways here >

Meanwhile, we’ll be waiting to find out if The Day of the Lord 2 is in the making – or if the “Parte 1” was just a clever title to tease that it’s only just begun.

The Day of the Lord is out on Netflix worldwide from October 30, 2020.

Menéndez is a retired priest who lives in his dark and ruinous apartment turning his back on the world. He suffers from a crisis of faith and is haunted by horrible nightmares and acts of his past that torture him. One day, he receives the visit from Sebastián, an old friend who knows Menéndez’s past business. He claims his daughter is possessed by the devil and begs for Menéndez’s help to exorcize her, although he’s well aware of the aggressive methods the priest uses. Pushed by Sebastián’s insistence and his inner conflict, Menéndez takes this case as a chance for redemption. He has a new goal in life but is she really possessed or will she suffer a senseless torture?